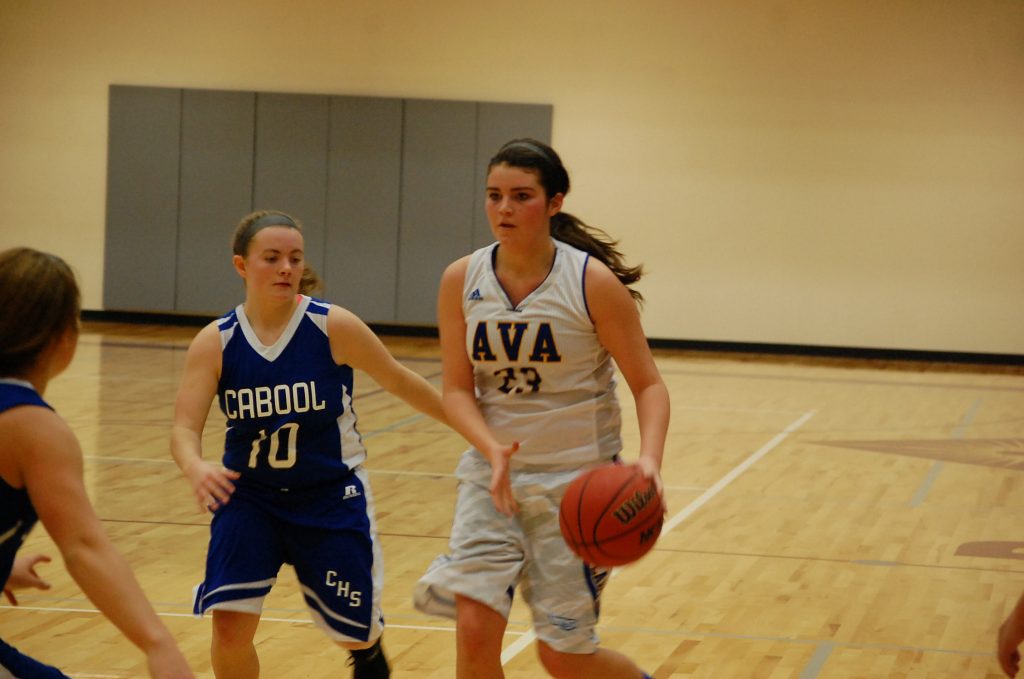 Senior McKenna Hunsaker protects the ball from a Cabool player as she brings the ball down the floor Saturday at Mtn. Grove.

The Ava Lady Bears were playing for the consolation championship Tuesday afternoon in Mtn. Grove’s holiday basketball tournament, but the Bears finished the 2014 portion of the season Monday with a loss to Aurora in Springfield’s Blue and Gold Tournament.
The Lady Bears lost in the first round to Tuscumbia, then defeated Cabool and Chadwick to advance to Tuesday’s consolation finals.
Tuscumbia, which knocked off the Ava girls in the first round, defeated Willow Springs Monday in consolation action to advance to the fifth place game Tuesday.
Ava’s girls faced Cabool in the 9 a.m. game Saturday morning and overcame an early Cabool lead to defeat the Lady Bulldogs 57-34.
Cabool hit a shot at the buzzer to lead 10-8 after one quarter, but Ava led 28-17 at the half.
The Lady Bears expanded their lead to 44-27 after three quarters of play.
The Lady Bears defeated Chadwick, 35-23, Monday morning and would face Salem at 2:30 Tuesday.
Salem defeated Mansfield 68-38, in consolation action Monday.
The Ava Bears had the unfortunate draw of facing top-ranked Ozark in the Gold Division of the Springfield Blue and Gold Tournament on the day after Christmas.
Ozark handled Ava easily, winning 59-31.
That dropped the Bears into the consolation bracket where they defeated Springfield Greenwood, 44-35, on Saturday, advancing to the consolation quarterfinals against Aurora Monday.
The Bears got off to a slow start against the Houn Dawgs, trailing 29-18 at the half, and lost the game 56-34.
The loss dropped the Bears to 3-7 on the season and will not play again now until they travel to Hollister on Tuesday, Jan. 6.
The Bears will be home Friday, Jan. 9, against Mansfield, at which time the Bears will also celebrate Hoopcoming.
The Lady Bears, in the meantime, entered the consolation championship game Tuesday with a record of 4-3. Their next action will be a conference game at Thayer on Monday, Jan. 5.
The Lady Bears will be at home Thursday, Jan. 8, hosting Neosho, in a non-conference game.