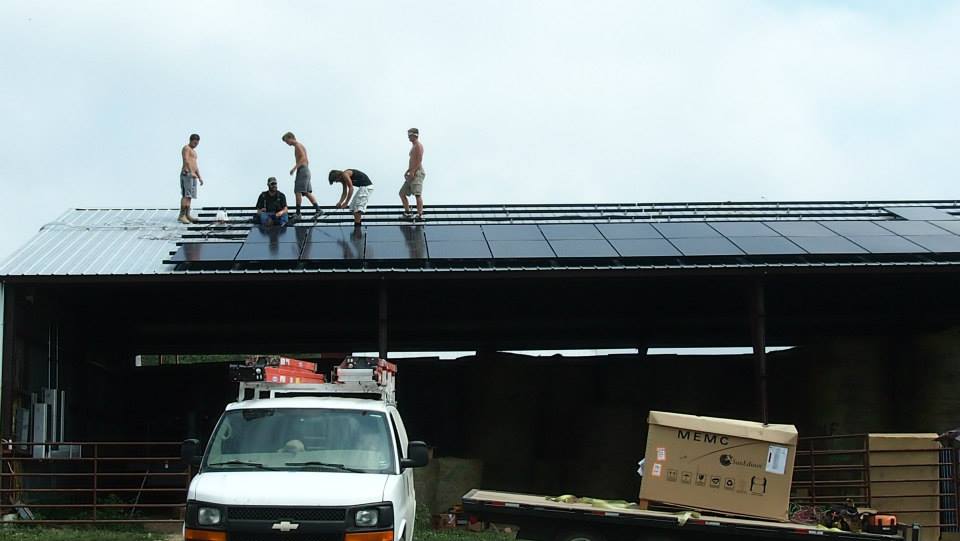 Solar panels installed on a barn roof at the Heinz Buff dairy farm near Ava are capable of producing 26.5 watts of electricity each. The panels have been proven sturdy enough to withstand harsh weather conditions including large hail. 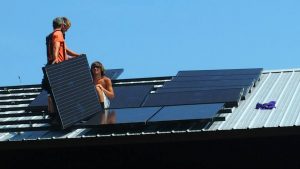 There is a lot of discussion these days about environmentally friendly energy on the farm. One dairy farm family near Ava recently moved beyond discussion and on to implementation with the installation of a solar energy system.
Heinz and Vroni Buff are currently producing sufficient electrical energy to run their milk parlor and home according to Ted Probert, a dairy specialist with University of Missouri Extension.
The components of the system include one hundred 26.5 watt solar panels and three electrical inverters. Its rated capacity is 26.5 KW.
According to Probert, the panels are mounted on the south-facing slope of the Buffs’ hay shed. They produce DC electrical current that is converted to AC by the inverters mounted on the wall of the hay barn.
“The number of both panels and inverters required by a specific installation will be determined by the KW capacity needed by the operation. Power coming from the inverters is available for use on the farmstead,” said Probert.
While the generating system is rated at 26.5KW the actual output fluctuates according to the intensity of sunlight. Less power is produced on cloudy days and production is zero at night.
When electricity is produced in excess of demand, the surplus is fed back onto the grid and the amount going out is monitored by the power meter at the pole. This excess power nets the farm “credits” which are redeemed when system production does not meet the demands of the farm.
“One negative is that in the case of a power outage the farmstead cannot use the solar generating system. This is because of the possibility of putting electricity back on the grid and causing injury to repair linemen,” said Probert.
A question that comes up is can the farm sell power back to the grid? The answer, according to Probert, is no, at least not for a feasible price. 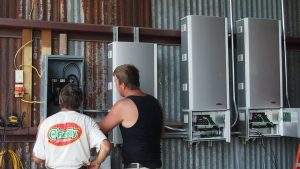 “The means of remuneration for excess production is through the credit system. For this reason, it is important that installations be sized as closely as possible to generate all the power the farm requires but not to generate too much excess,” said Probert.
According to representatives of Missouri Sun Solar, the company that installed Buffs’ system, system maintenance is minimal. There are no moving parts to wear out, and all components have a long life expectancy.
The panels are sturdily constructed and have proven to withstand considerable weather challenges including large hail. System warranties include workmanship – 12 years, inverters – ten to 25 years, panels – 25 years.
Obviously a major factor when considering a solar installation is its economic feasibility.
When sized to run a home, and a 100 cow dairy, the cost of this system was $80,000. A 30 percent federal tax credit reduced the cost to $56,242. Reasonable 12- or 20- year financing is available through the company.
The Buffs’ monthly payment with 12-year financing at 2.99 percent is $471.09. That is about $100 more than they previously paid for their electric bill (@ 11 cents/KW).
“The good news is that at the end of the 12-year financing period, electricity will be available essentially at no cost. In their promotional literature, Missouri Sun Solar predicts an annual 5 percent increase in electric rates. Any increases in rates would enhance the attractiveness of the system economically,” said Probert.
For more information, contact either of the MU Extension dairy specialists in southwest Missouri: Ted Probert in Wright County at (417) 741-6134 or email at probertt@missouri.edu or Reagan Bluel in Barry County at (417) 847-3161 or by email at BluelRJ@missouri.edu. 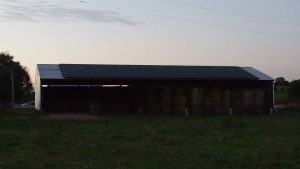