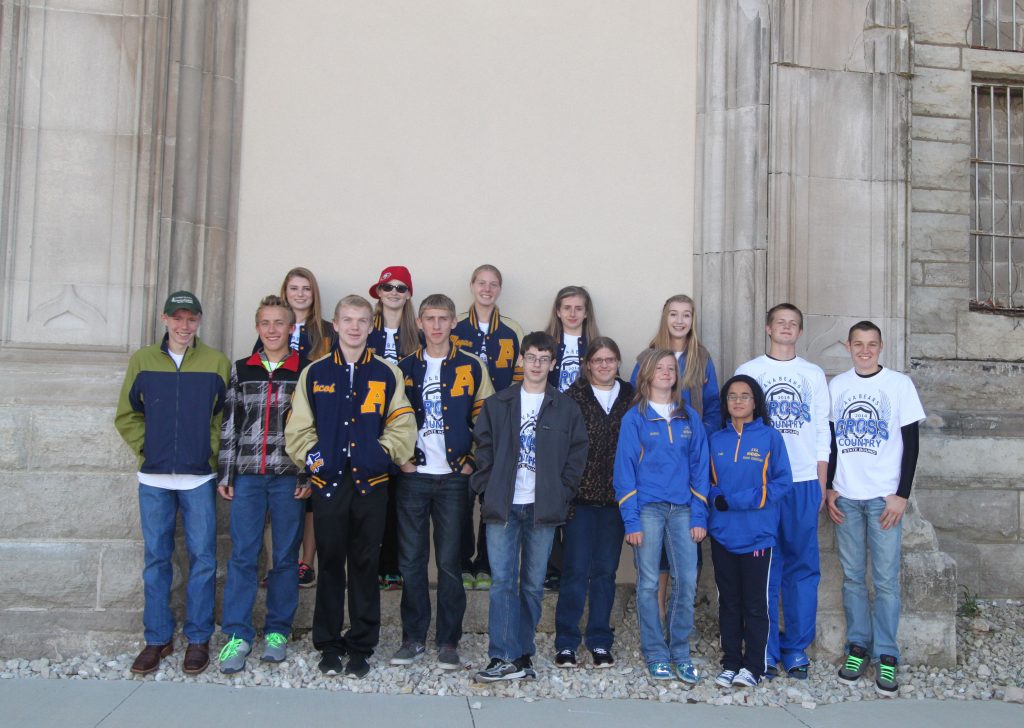 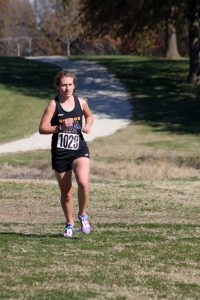 Ava Lady Bear Cross Country runner, Bailey Ray finished 10th at the state meet, making her the fastest  and the  highest placed girl runner  in the history of cross country at Ava.  Bailey a junior, has led the team all year but ran an exceptionally determined race, setting a new career personal record of 20:48 to place 10th out of 164 runners.
Bailey’s average time per mile was 6:42.
Bailey unseated the previous school record holder, Christina Shortt, who posted a time of 21:41 in 2012.  Bailey improved her time from the same course last year by 1 minute and 40 seconds.
Not only did Bailey set a new school record, but four of her teammates also made the top 10 list of all time.
Senior Megan Cooper ran a 23:07, which was 59 seconds faster than her finish time from her junior year. Megan finished in the 85th position at the state meet and is now at the number 6 spot for Ava.
Senior Kim Copeland, who placed 93rd and whose time was 23:17 at the state meet, is now in the number 7 spot of all time for Ava.
Junior Tori Kuz ran a 23:30 to place 104th overall and made the top 10 list with the 8th spot. And freshman Darci Ray rounds out the 10 fastest girl runners at Ava with her 23:36 finish and was 111th.
Junior JimiLynn Raybould ran a 25:20 to place 149th and junior Kayla Cooper came in 150th with a time of 25:21.
The Ava Girls placed 11th as a team and averaged 22:52 for the top five runners that scored. 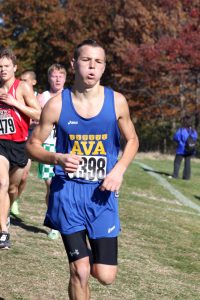 On the boys’ side, junior Logan Sicilia ran a new PR of 17:21 to place 18th out of 164, making him only the 5th runner to become All-State since the inception of cross country in the fall of 2005.  His fast time placed him second in the Ava school records.
Logan, who qualified for state with his team, had nursed a deep bruised knee from a hard fall, but managed to tough it out and compete at districts after being sidelined for a full week with his injury. Despite the layoff, Logan showed tremendous effort and fitness to earn his All-State honor.
Junior  Caleb Stillings finished in 74th place with a time of 18:29.  Caleb who has led the team all year with multiple showings of 16 minute finishes broke the hearts of many of his friends and family by injuring his right ankle late Thursday night before the team left on Friday.
“It was one of the worst sprains I have seen,” stated Coach Liz Kyger, “and what an inopportune time to have to fight through an injury of that degree.”
Caleb who finished 2nd at the districts close behind Daylin Quinn from Liberty, with a time of 16:51, still attempted to race despite severe bruising and swelling that the coaching staff and trainer just could not get to decrease by gun time.
Daylin finished in All-State status with a 16:48 and the sixth place runner had the exact time that Caleb had run at districts. Last year Caleb had run 2 seconds faster at state than his winning time at districts.
Needless to say it was a very disappointing day for Caleb Stillings.
Freshman Drew Adams ran a 18:54 to place 92nd; junior Sage Clunn ran a 19:25 and placed 124th; senior Cole Atnip ran a 19:38 to place 134th; junior Jonah Brown ran for the 151st spot with a time of 20:32; and sophomore Jacob Luebbering placed 156th with a time of 20:58.
The Ava boys as a team ran an average time of 18:46 and placed 13th.
The 2014 Cross Country team and Coach Kyger would like to sincerely thank all the parents, grandparents, friends, teachers and community members that have encouraged and supported the team this season and during the summer.