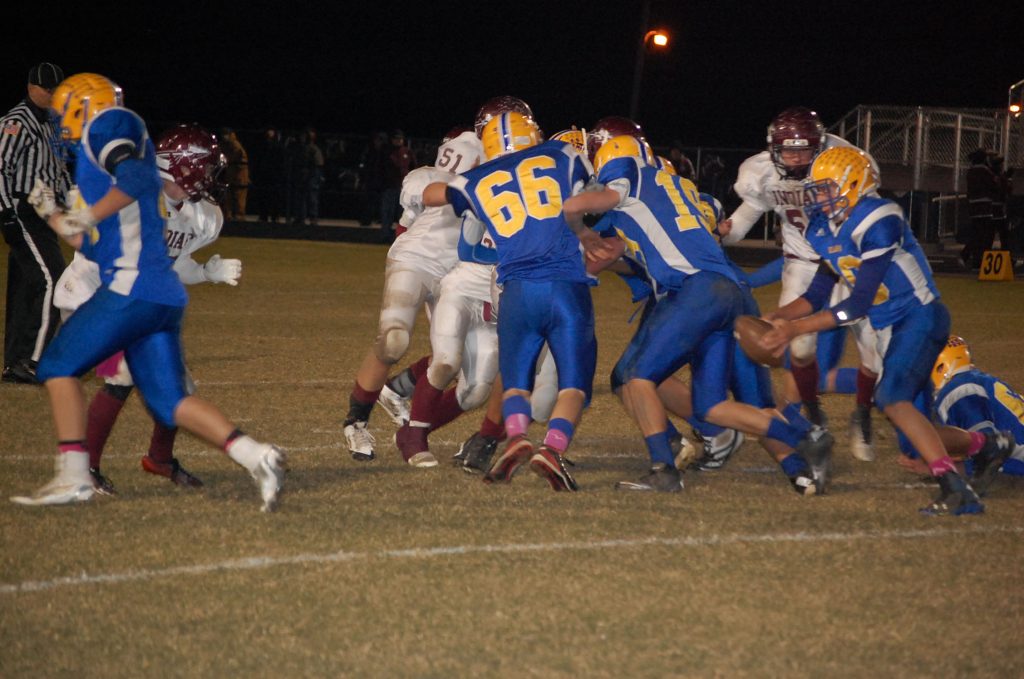 Ava quarterback Cody Huff (at right of picture) follows his blockers to pick up a first down at midfield in fourth quarter action here last Fiday night. The Bears lost the district contest, 41-30, to School of the Osage. 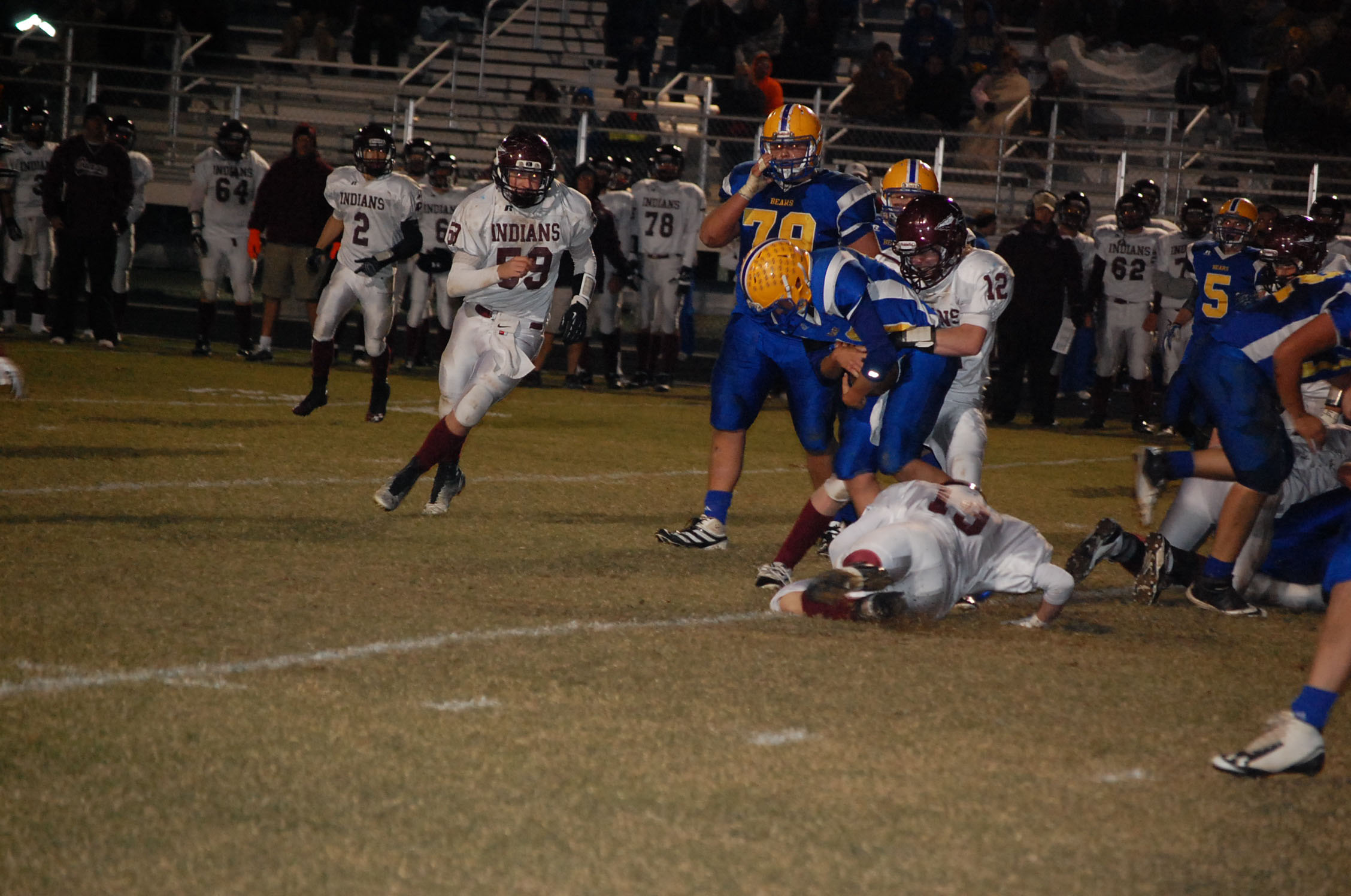 Colton Akers picks up a first down for Ava before being tackled by Osage’s Jeb Robertson (12) in district play here last Friday night.

Ava quarterback Cody Huff connected with Kane Thompson for a 99-yard touchdown pass play late in the third quarter here last Friday night to give the Bears a 30-27 lead over School of the Osage.
That was the last time the Bears would score, however, and the Indians added two more touchdowns to win the district semifinals contest 41-30.
The loss ended Ava’s season at 9-2 and advanced Osage to the district championship game to be played at Mtn. Grove this Friday night.
The second-round district playoff game provided all the excitement and drama football fans could hope for, and the outcome was not decided until late in the fourth quarter when the Indians scored on a 56-yard pass from quarterback Austin Riley to Collin Samuelson. Jake Ulmer capped the touchdown with the extra-point kick that would create the final score of 41-30.
Ava took advantage of an Osage fumble to score first at 7:21 in the opening period of play. The touchdown came on a 33-yard run by Thompson, and Shannon Porter kicked the extra point to put the Bears up 7-0.
Osage came right back and tied the game at 7-all on a one-yard run by Dylan Riley and the PAT by Ulmer.
On the following drive, the Bears pulled off a fake punt on 4th-and-4 and with the help of an illegal horse collar tackle by Osage got a first down at the Osage 38-yard line. Runs by Nate Bray and Colton Akers got the Bears inside the 10-yard line, but Ava had to settle for a 23-yard field goal by Porter with less than a minute left in the first quarter, and the Bears held a 10-7 lead after one.
The Indians were on the move, once again, as the chains were moved to start the second quarter, and with 10:34 on the clock, Osage scored on a 31-yard pass play from Riley to Jeb Robertson. Ulmer’s kick put the Indians back on top 14-10.
Ava regained the lead at 8:17 in the second quarter when Bray shot through the defensive line and ran 62 yards to paydirt. Porter’s kick was wide right, and Ava’s lead was a narrow 16-14.
There would be still another lead change before the half ended, as Osage quarterback Riley passed to Ulmer for a 22-yard score, and the Indians led 20-16 at halftime when the 2-point conversion attempt failed.
Osage expanded its lead to 27-16 with a 19-yard touchdown pass from Riley to Robertson at 8:36 in the third period.
A fumble by Osage at the Ava 12-yard line ended an Indian scoring drive and set up Ava’s next touchdown. On the first play of the possession, Colton Akers found an opening and ran 88 yards  to score with 3:38 left in the third stanza. Porter’s kick once again drifted to the right and Ava had trimmed the Osage lead to 5 points, 27-22.
A big sack by Brandon Johnson on the ensuing drive forced the Indians to punt and that kick was downed by Osage at the Ava one-yard line to set up the 99-yard score that would put Ava back in the lead with 55 seconds left in the third quarter.
An offensive pass interference call against the Indians gave Osage one final play with no time on the clock at the end of the third quarter. Backed up to the 24-yard line, Riley passed to Samuelson for the score, and Ulmer booted the PAT to put the Indians back on top, 34-30 to begin the final period of play.
Osage’s final score came on a 56-yard pass from Riley to Samuelson with 4:55 left in the game, and Ulmer added the point-after for the final score of 41-30.
Akers was Ava’s leading rusher Friday night with 145 yards on 15 carries and a touchdown.
Thompson carried seven times for 103 yards and a touchdown, and had the 99-yard reception for a TD.
Bray picked up 93 yards on nine carries and had a touchdown.
Huff completed one of 10 passes for the 99-yard scoring play.
Ava rushed for 390 yards and added the 99-yard pass for 489 yards total offense.
Defensively, Bray had 17 tackles, three for loss yardage, and Tristan Haltom had eight tackles.
Brandon Johnson had a sack and Caleb McFarlin and Paul Porter each had a fumble recovery.