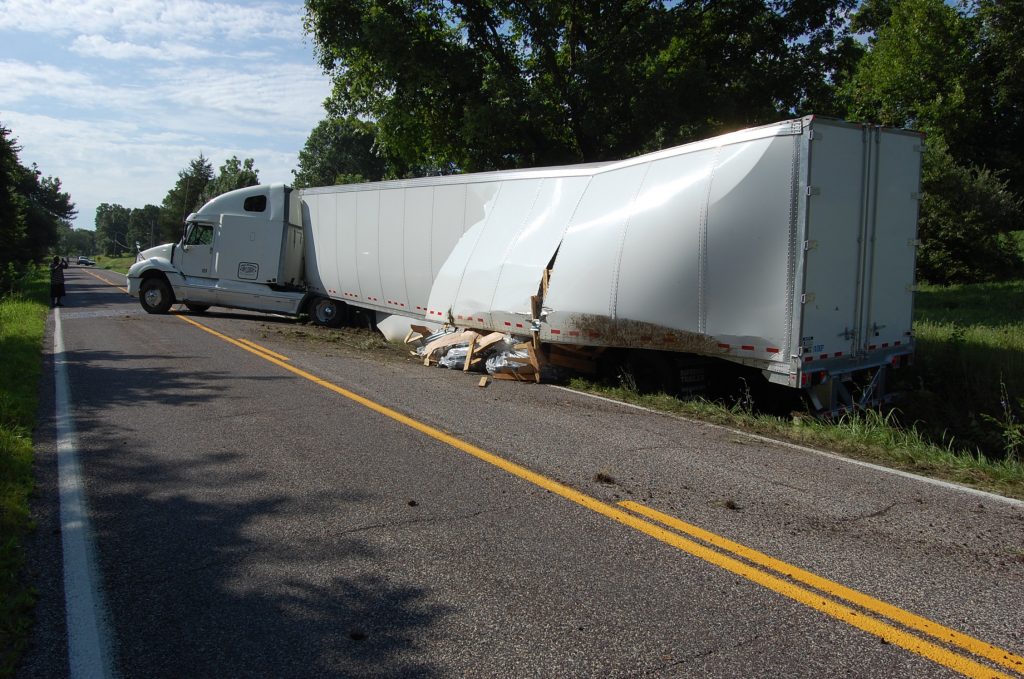 Highway 14 just west of Ava in the Ava View Heights area was closed for several hours Monday after this tractor-trailer rig ran off the highway, then returned to the roadway to partially block the driving lanes. No one was hurt in the wreck.

Highway 14 at the west edge of Ava was closed most of the morning Monday after a tractor trailer rig ran off the road, then returned to the highway, blocking most of the driving lane.
No one was hurt in the wreck that occurred before 9 a.m., but traffic had to be detoured through the Ava View Heights subdivision for several hours while the site was being cleared.
The Missouri State Highway Patrol, City of Ava Police, Ava City Fire Department, and Ava City Utilities personnel helped direct traffic in the area.

This truck ran off Highway 14 at the west edge of Ava Monday morning, forcing traffic to detour through the Ava View Heights subdivision until mid-afternoon. Because of damage to the box trailer, cargo had to be offloaded before the truck could be moved.

The cleanup was delayed because the truck’s cargo had to be offloaded before the truck could be towed by Jim’s Body Shop, due to a gaping hole in the side of the box trailer.
A 38-year-old Ava man was taken to the hospital with serious injuries just after midnight Sunday following a one-vehicle wreck on Route FF. east of Ava.
The Highway Patrol said Chad F. Bartels was eastbound in a 1997 Chevrolet Suburban, three miles east of Ava, when he ran off the road at 12:30 a.m. After leaving the roadway, the vehicle struck a culvert.
Bartels was taken by ambulance to Mercy Hospital in Springfield with serious injuries.
Patrick A. Thornton, 29, of Vanzant, was taken by ambulance to Texas County Memorial in Houston following a one-vehicle crash south of Mtn. Grove on the afternoon of July 9.
The Highway Patrol said the wreck occurred at 4:45 p.m., nine miles south of Mtn. Grove on Route 95, in Douglas County.
Thornton was driving a 1990 GMC van that ran off the road and struck a tree and a fence.
Thornton was cited for felony driving while intoxicated, driving while revoked (2nd offense), careless and imprudent driving involving an accident, and no seat belt.
The Highway Patrol also arrested two people last week on drug charges.
Brandon G. Long, 27, of Mtn. Grove, and Steven M. Moore, 22, of Branson, were both arrested at 3:28 p.m. on July 11 for possession of marijuana and unlawful use of drug paraphernalia.