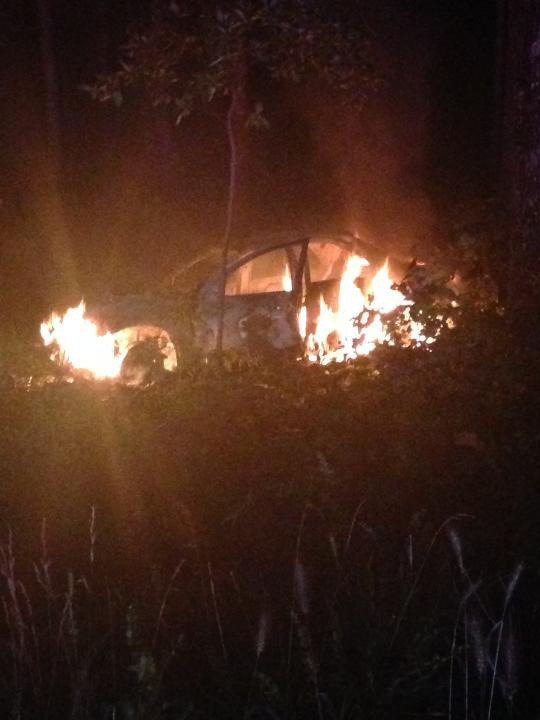 A high-speed pursuit by a Douglas County Deputy late Monday night resulted in a fiery crash and rescue by the deputy.
The incident began when the Douglas County Sheriff’s Office received a call that a male subject had verbally assaulted a female in the City of Ava.  An eyewitness provided officers with the vehicle information and direction of travel.
Douglas County Deputy Dakota Mings located the vehicle and attempted a traffic stop at the intersection of CR419 and JJ Highway south of Squires in Douglas County.
When the deputy got out of his car to make contact with the driver, the driver fled in the vehicle and a pursuit ensued. The pursuit continued on the Douglas County road before crossing over into Ozark County.
As the vehicle approached JJ Highway, the driver failed to negotiate the turn onto the blacktopped road and wrecked on the north side of JJ.
Deputy Mings began ordering the driver from the vehicle, with no response, then realized the driver appeared to be unconscious, and he approached the vehicle.
As Deputy Mings was attending to the driver, the vehicle caught fire. The deputy then pulled the unconscious driver from the vehicle to safety as it exploded and became fully engulfed with flames.
The driver was flown by Air Care to Cox Hospital with apparent head trauma.
“The driver was very fortunate that Deputy Mings took the action he did by placing his own life in jeopardy to save him,” said Sheriff Chris Degase.
“I am very proud of the actions taken by Deputy Mings in not only saving this man’s life that was resisting arrest but by his actions during the pursuit as well,” the sheriff added.
Charges are pending.
In a traffic report released by the Missouri State Highway Patrol, the driver is identified as William C. Rains, 33, of Niangua. The vehicle he was driving was a 2002 Chevrolet Cavalier.
The Troop G report shows that Tpr. Justin Piccinino and Cpl. Amye Johnson investigated the crash at 1:17 a.m. Tuesday, July 8 at the junction of Highway JJ and Ozark County Road 946.
Squires Volunteer Fire Department assisted with the incident.