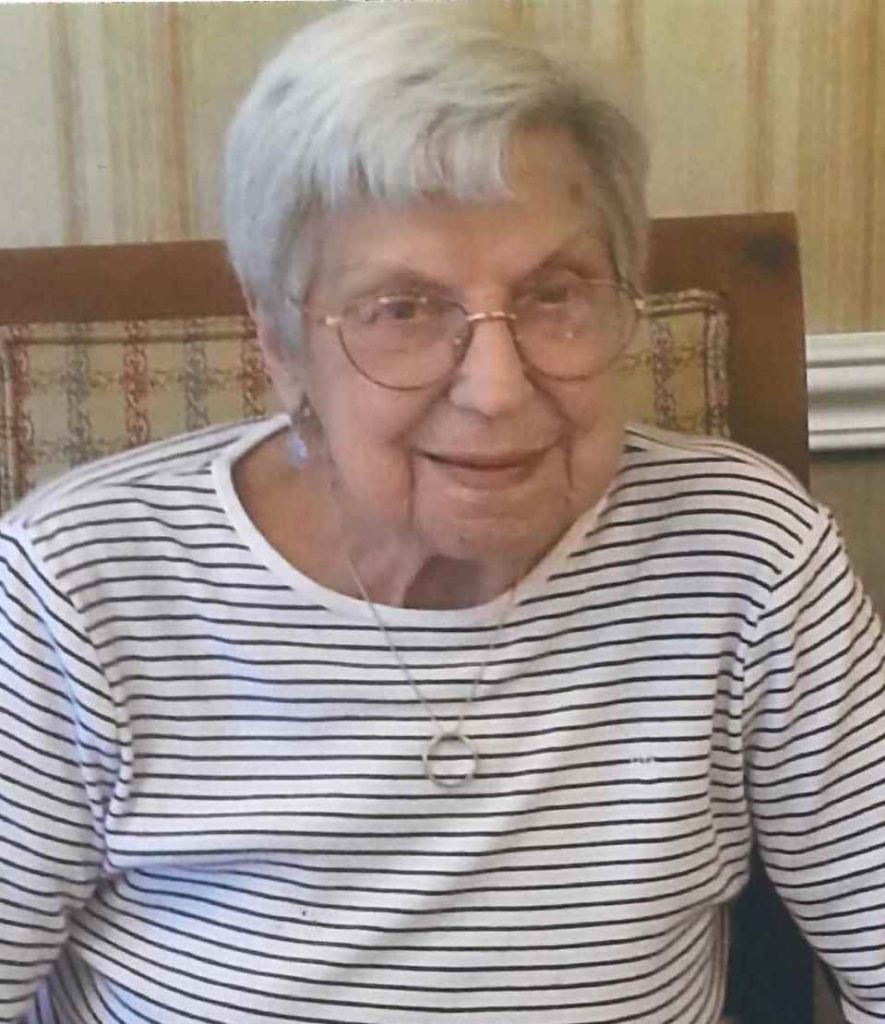 Martha Lou Shollenberger, 92, died June 2, 2014, at Mercy Villa after a valiant struggle with autoimmune issues (rheumatoid arthritis) and against inevitable failure of several body systems.  Martha Lou’s strong will and courage never left her; Death never faced a more formidable foe.  Indeed, except for the absence of her earthly presence among us, Death did not win.
Martha Lou Ellington was born in Mountain Grove, Mo., on May 9, 1922, one of four children of Floyd and Ida Belle Ellington. She graduated from Senior (now Central) High School in Springfield and attended Southwest Missouri State Teachers College, now Missouri State University, until her marriage.
Martha Lou was an accomplished pianist, known especially for being a sensitive accompanist to vocal and instrumental soloists. Indeed, this choice – to support a soloist rather than be the focus of attention – was reflective of her inner character.  She was a caregiver for everyone in the family and so many outside the family. She was claimed as a favorite aunt, friend, co-worker, neighbor, adopted parent, and adopted grandparent by many.  Martha Lou was a treasured patient and co-resident at Mercy Villa.  She never met a stranger.
In April 2014, she celebrated 50 years of membership in P.E.O in Chapter ER. She was a member of High Prairie Christian Church, Fair Grove, Mo., where her daughter, Peggy, served as pastor. She was also a lifelong member of Central Christian Church, Springfield, Mo., where she served as a deacon.  She served on the board of Friends of the Library in Springfield.
Martha Lou worked while in school at Will James Music in downtown Springfield. She witnessed firsthand the creation of several well-known anthems as Mr. James composed them at a piano in the store.
She also worked in the family businesses: Ellis Dairy in Ozark, Mo.; the Dairy Queen in Ava, Mo.; and her husband’s piano tuning business. She also gave piano lessons in the home and served as a substitute teacher in the Ava, Mo. schools.
For several years, she was secretary to the principal of Freshman High School in Jefferson City, Mo., where she served as a mother figure for countless students.
On Nov. 20, 1941, Martha Lou married C. King Shollenberger, who preceded her in death shortly after their 70th anniversary.
Martha Lou was also preceded in death by her parents, and brothers, Chauncey and Jim.
She is survived by her brother, Harold (Maxine) Ellington; and by her four children – the lights of her life – Jim (Cheryl), Union, Mo., Rev. Peggy Hennig (Eddie), Houston, Texas, Chuck (Barbara Turnbull), Mission, Kan., and Lyn (Richard Thompson), Springfield, Mo. Her beloved grandchildren are Scott (Darla) Morrison, Springfield, Mo., Mike (Carrie) Shollenberger, Longwood, Fla., and Jeff Shollenberger, Union, Mo.  She has five great-grandchildren: Amanda and Alexis Morrison, Lainie and Marisa Shollenberger, and Kyra Shollenberger.
Martha Lou is also survived by nieces and nephews, Judy Ann Ellington, John Stephen Ellington (Judy Marie), Pam Mettner, Andi Davis (Buddy), Rev. Dr. John Ellington, and Charles Shubert (Jan).
The family wishes to thank Dr. Timothy Wilson and his office staff and the staff of Mercy Villa for their long-term compassionate care given Martha Lou, and Mercy Hospice during her final hours.
A memorial service for Martha Lou will be held at 2:30 p.m. on Saturday, June 28, at Central Christian Church, 1475 N. Washington Ave., Springfield, Mo. 65802, with Rev. Dr. Ed Hennig officiating, under the care of Gorman-Scharpf Funeral Home.  Memorial contributions are welcome to Central Christian Church (address above), High Prairie Christian Church, 569 Red Top Road, Fair Grove, MO, 65648, and the Arthritis Foundation (www.arthritis.org).
Private inurnment will be at Missouri Veterans Cemetery, where her ashes will reside beside those of her beloved King.
Martha Lou walked the earth with true inner Christian grace, her mere presence bringing joy to the hearts of those she encountered.  Her wit was sharp, her wisdom deep, her devotion to family immeasurable, her contributions countless.
The strife is o’er,
The battle done;
Now is the Victor’s triumph won;
O, let the song of praise be sung:
Allelulia, Allelulia!