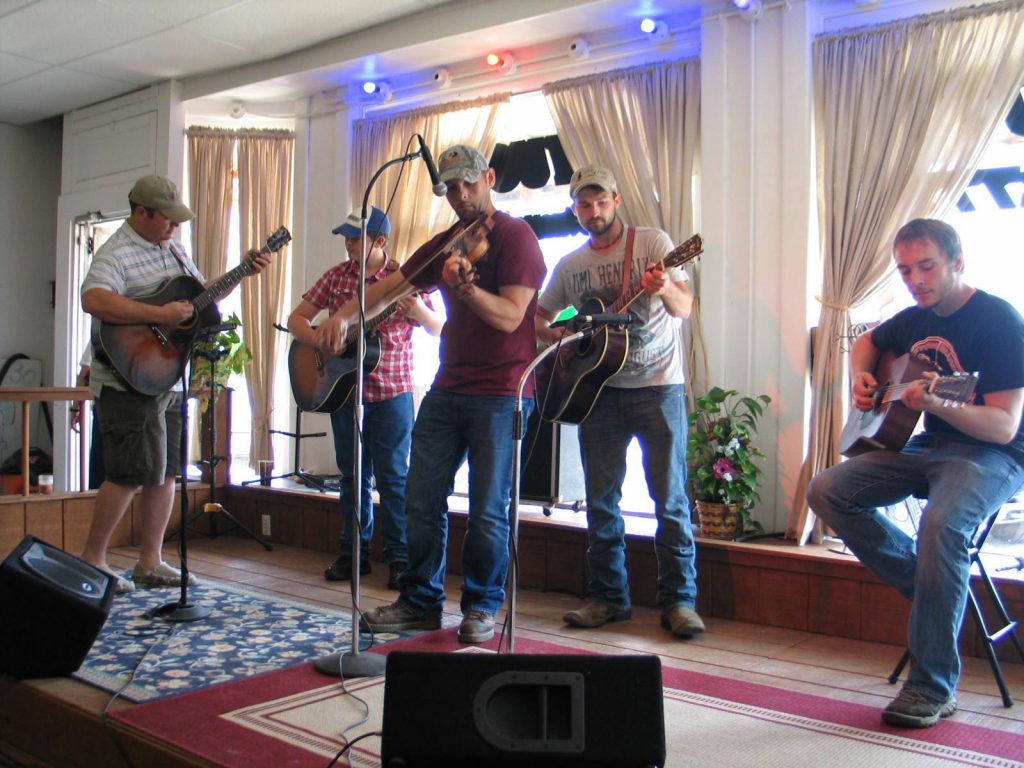 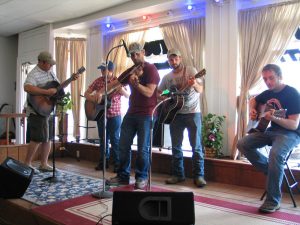 The Bob Holt Memorial Fiddle Contest was held Saturday, May 24 in conjunction with the first annual Ava Summer Fest. Due to rain showers it was moved from the upper Ava City Park to Marriott Music on the Ava square.
Even with the short notice of the location change, there was standing room only, as 13 contestants competed in their age divisions.
This event was named in honor of the late Bob Holt, who many will remember as a square dance fiddle player and teacher.
Many fiddlers attribute learning tunes from Bob while teaching at fiddle camps or in private lessons.
He was well respected not only by his students and fellow musicians, but also by the Missouri Traditional Arts Apprenticeship Program. This program allowed Bob to teach an apprentice for an extended amount of time through a grant program, of which he was a Master Artist for 10 years.
Bob attributed his learning to play the fiddle from uncles and other local fiddlers. His father also whistled tunes for him and he listened to recordings from the 20’s and 30’s. Although Bob was not a competitor at fiddle contests he did judge a few.
Combining the contest with a square dance is a way to not only recognize Bob and his dedication to preserve fiddle music but also the interrelationship it has with the localized square dance. Due to his desire to preserve the music and dance, he was contacted to collaborate with Edna Mae Davis, another Ava native, who was a Master Artist in the Traditional Arts Apprenticeship Program with a mutual desire. Together they were able to teach music and dance to many students from across the country who attended camps and festivals during the summer months.
During other times Edna Mae would host square dances open to the public and Bob would play his super-fast fiddle tunes as dancers would do-si-do and promenade. Edna Mae passed away in 2003 and Bob followed in 2004.
For this being the first Ava Summer Fest fiddle contest, it was well attended not only by spectators but by contestants.
The contest had three divisions: Junior (under the age of 15), Senior (65 and older), and Open (16- 64).
The Junior division had four contestants: 1st place, Savannah Shannon, of Fordland; 2nd place, Tanner Marriott of Ava; 3rd place, Makayla Byerly, of Ava; 4th place, Preston Marriott, of Ava.
Tanner Marriott, age 9, holds a junior title in the Arkansas state championship, a pee-wee title in the Mid-America Fiddle Fest in Branson (2 years), and a pee-wee title in the Texas State championship as well as placing in other contests throughout Missouri, Tennessee, Kentucky, and Texas. He was also recognized at the 2013 Grand Lake National Fiddle Fest as the outstanding young fiddler age 10 and under and awarded the P.T. Riley Jr. – Jr Achievement Award.
Preston Marriott holds the pee-wee title in the Jana Jae Fiddle Camp and Music Festival fiddle contest, as well as placing in contests throughout Missouri, Tennessee, Kentucky, and Texas.
Savannah and Makayla are relatively new to the contest scene, beginning to compete in the last couple of years. Congratulations to Savannah, who said this was the first contest she has won.
The Senior division saw two old friends competing against each other again. Gary Johnston of Nevada, Mo., took 1st place to Longrun, Mo., native H.K. Silvey, who took second.
Many will recognize H.K. as another local square dance player who helped preserve the music and dance of this area. He was the fiddle player for the square dances at the annual Hootin an Hollerin festival at Gainesville for 18 years.
Gary is also no stranger to playing dances, as well as festivals, conventions, and contests. He holds several titles, including the Missouri State Senior division champion.
The open division saw the toughest competition. 1st place went to Cody Marriott, of Ava; 2nd place, Beau Johnston, of Nevada, Mo.; 3rd place, Tom Berthold, of Ava; 4th place, Bart Trotter, of Reeds Spring; 5th, Casey Ritchie of Thornfield; 6th, Tad Johnston, Nevada, Mo.; 7th place, David Lamb, of Delight, Ark.
Cody Marriott is a talented fiddler who holds many titles, including Missouri State Champion. He has placed in many contests throughout the country, including the National Fiddle Contest in Weiser, Idaho.
The Johnston brothers of Nevada, along with their dad, travel all over to contests, conventions, and festivals to compete or just have fun jamming.
Tom Berthold is a newcomer to the contest scene and made a great first impression on the judges.
Bart Trotter is a player recently relocated to the Branson area from Texas. He is 2010 New Mexico State Champion Fiddle Player, 6-time National Champion Fiddle Player (5-time N.O.T.F.A. Champion, and 1-time S.P.B.G.M.A. Champion), 1986 World Champion Fiddle Player, 2-time First Runner-up at the Grand Masters Fiddle Contest in Nashville, Tenn., 5-time Southwestern States Fiddle Champion, 5-time winner of the New Mexico State Fair Fiddle Contest in Albuquerque, N.M., and 2-time winner of the U.S. Invitational Fiddle Contest in Mtn. View, Ark.
David Lamb has been absent from the scene for several years and the fiddle players were glad to see him come back to competition.
Ava was privileged to have contestants with so much talent to participate in the 1st Memorial Fiddle Contest. Next year promises to be bigger and better!