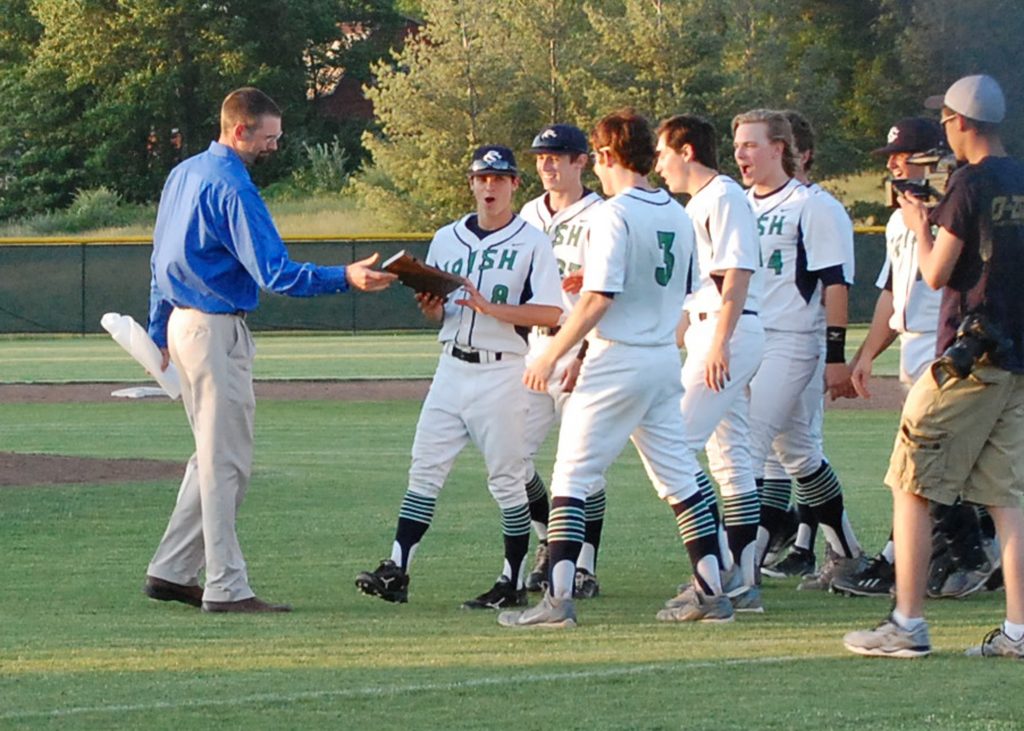 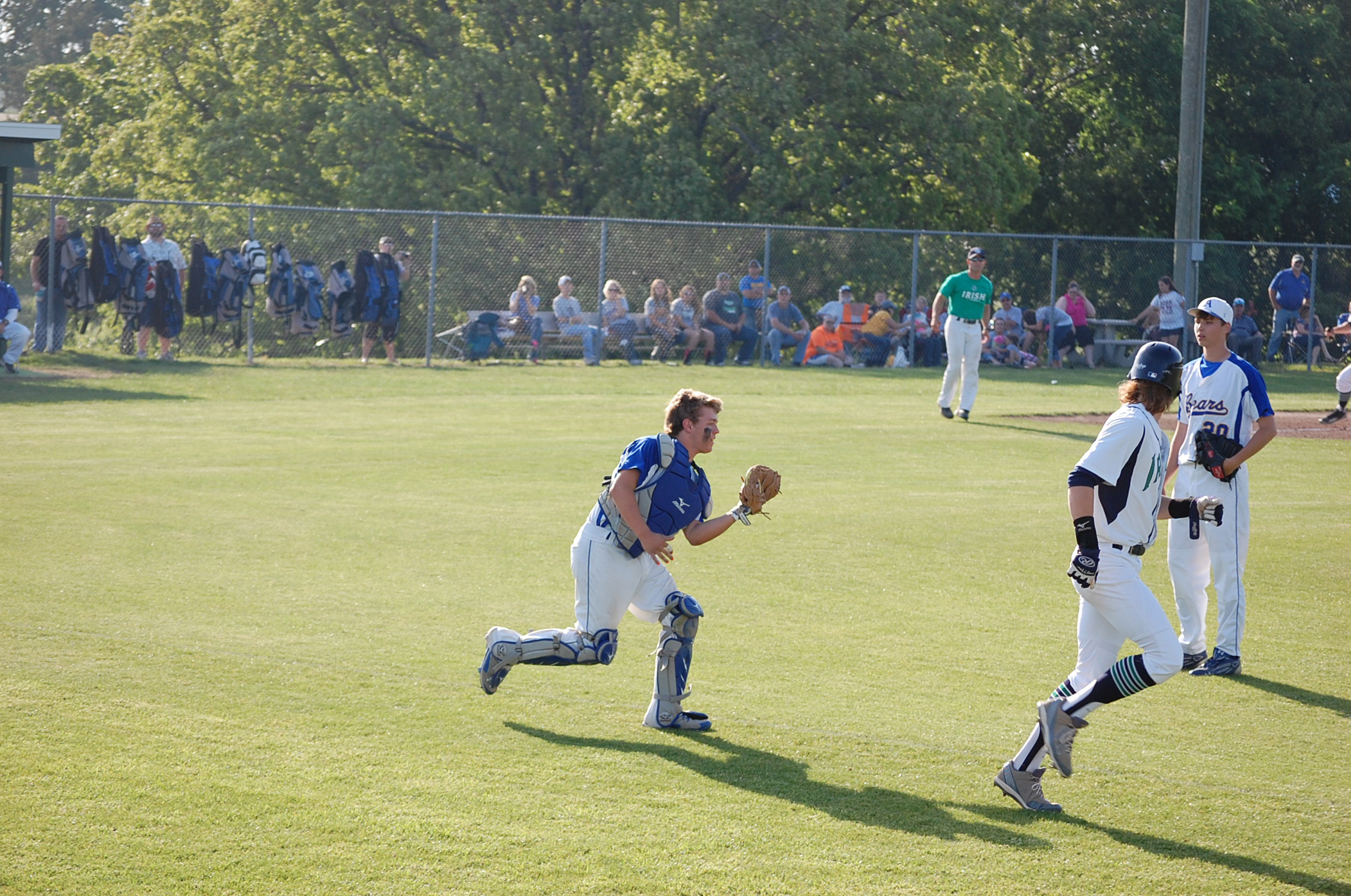 Ava sophomore catcher Morgan Smith battles the wind to catch a popup in front of the pitching mound Tuesday. Freshman Nick Sterling is on the mound for Ava.

The 2014 Ava High School baseball season came to an end Tuesday in the championship game of the Class 3 District 10 Tournament, being played at Ava.
Ava advanced to the finals by defeating two SCA teams for the second time this season – Willow Springs 8-0 in the opening round last Saturday and Mtn. Grove 12-6 on Monday in the semifinals.
Those two wins earned the Bears the right to take on the state’s No. 1 ranked team, the Springfield Catholic Fighting Irish which came into the tournament with a record of 22-2.
Ava’s season ended at 15-5, with all of Ava’s losses coming in the month of May.
Ava’s Kerr Field saw record attendance on Monday and Tuesday, with many spectators utilizing the grassy berm down the right field line for a vantage point.
Tournament play opened on Saturday with Strafford defeating Houston 3-2, Ava beating Willow Springs 8-0, and Mtn. Grove defeating Mtn. View-Liberty 5-3.
Catholic, which drew a first-round bye, defeated Strafford 9-2 in semifinals action on Monday afternoon, and Ava defeated Mtn. Grove, 12-6.
That brought the district title down to Tuesday night’s game which the Irish would take in a 13-3 decision in six innings.
Zach Hunsaker went the distance for the Bears in the 8-0 win over Willow on Saturday.
Ava’s defense turned three double plays in the game to keep runners off the bases. Ben Loge had the big offensive attack for the Bears, driving in three runs in the sixth inning with a base-clearing double.
Cooper Emerich was 3-for-4 at the plate with two runs scored.
Hunsaker allowed just four hits on the day, with three strikeouts and no walks.
Loge got the start for the Bears in the semifinals game on Monday and picked up his seventh win of the year over the Panthers.
Ava took an early 1-0 lead in the first inning only to have Mtn. Grove come back with four in the top of the second to take the lead.
The Bears added one in the bottom of the second, then added five more in the bottom of the third and five more in the bottom of the fourth to lead 12-4 after four innings.
The Panthers got two runs in the top of the fifth inning to complete the scoring.
Emerich was 3-for-3 with four RBIs for the Bears, and scored two runs. Chase Gastineau drove in three runs with a double and scored twice. Hunsaker also had a 3-RBIs afternoon with a double.
Freshman Nick Sterling got the start for the Bears in the championship game with Catholic on Tuesday afternoon.
After some early control problems and allowing one run in the first inning, Sterling found his groove and pitched a scoreless second inning.
The Irish got five runs in the bottom of the third to take a 6-0 lead, but Ava cut the lead in half with one run in the top of the fourth and two in the top of the fifth inning.
Catholic answered with five runs in the bottom of the fifth, then scored two in the bottom of the sixth to end the game under the 10-run rule.
Sterling was credited with two complete innings before giving way to Hunsaker who pitched 2 2/3 innings for the Bears. Coach Rex Sawyer called Shannon Porter in from right field to finish the fifth inning, and third baseman Cody Huff was on the mound when Catholic scored the game-ending run on a sacrifice fly with one out in the sixth.
In addition to strong pitching by Loge throughout the season, a key to Ava’s success this year was the ability of batters to put the ball in play. Six Ava players batted over .300 this season, led by Loge with a .434 average.
Emerich also finished the season over .400 with a .418 average.
Catcher Morgan Smith batted .375, Huff batted .367, Porter finished at .345, and center fielder Chance Boyd batted .309 on the year.
In his seven wins, Loge struck out 81 batters and walked 26, and recorded a 2.53 earned run average.
Hunsaker was 3-0 on the year with 24 strikeouts and only seven walks, but he also hit nine batters this year. Huff recorded one win in 10 2/3 innings of work.
Sterling struck out five batters in eight innings of work this year.
Springfield Catholic will host the winner of District 9 in State Sectional play on Monday. Licking and Cuba were playing Wednesday  for the District 9 title.