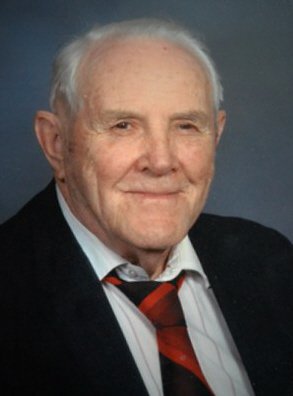 William Franklin Doran, 92, of Creston, Iowa, died May 5, 2014, at the home of his daughter, Deborah Doran Walls, in Oklahoma City, Okla.
Services were at 3 p.m., Sunday, May 11, at the First Christian Church (Disciples of Christ) in Creston, Iowa.  The Rev. Dianna M. Clark officiated the service.  Burial was at 5:30 p.m., Sunday, in Grandview Cemetery at Albany, Mo.  Visitation was 2 to 6 p.m. on Saturday, May 10, with the family receiving friends and relatives at Powers Funeral Home, Creston, Iowa.  Donations can be made in Bill’s name to the First Christian Church of Creston. Online condolences may be made at www.powersfh.com.
William Franklin “Bill” Doran, son of William and Maude Kay Doran, was born Aug. 9, 1921 in Douglas County, Mo. He lived on a farm outside of Ava, Mo., and attended Victory School and Mound High School.  In 1939 he enrolled at the University of Missouri in Columbia, Mo., and earned a B.S. degree in agriculture in 1943.  Upon graduation, he attended the Navy’s Officer Candidate School at Columbia University in New York City.  On an eight-day leave between officers’ training school and assignment to a ship in San Francisco, Bill married Ruth Sampson on Nov. 26, 1943.  They had met in 1941 while both were attending the University of Missouri.
During World War II Bill served on supply ships in the Pacific theater.  After the war he spent some time with the occupation forces in Japan. He also spent several months in China.  Bill was discharged from the Navy in 1946, but he remained in the Naval Reserve until 1973, when he retired with the rank of Lt. commander.
Bill taught vocational agriculture in Sheridan, Mo., and Panora, Iowa until 1956, when he joined the U.S. Soil Conservation Service. He worked for the SCS in Waseca, Minn., and Sidney, Iowa, and was District Conservationist in Corydon, Iowa, from 1959 until 1970.  He moved to Creston, Iowa, as District Conservationist in 1970.  His proudest achievement was the completion of two watershed projects. These projects included construction of two large lakes, the 12 Mile and the 3 Mile, which supply water to towns as far as 40 miles away.  After his retirement in 1982, he and his wife, Ruth, wintered in south Texas.  Bill continued these trips between Iowa and Texas until the spring of this year.
Survivors include his son, Sam Doran (wife Carol) of Wappingers Falls, N.Y.; his daughter, Deborah Doran Walls (husband Tom) of Oklahoma City, Okla.; his brother, Russell Doran (wife Ella) of Ava, Mo.; his sister Marcelline Hudson (husband James) of Gainesville, Mo.; his sisters-in-law, Betty Doran and Rita Doran; his grandson, the Rev. Jayd Doran Neely of Nashville, Tenn.; his granddaughters Elizabeth Doran of Boston, Mass., Meghann Neely Gardner (husband Joe) of Portland, Ore., and Susan Doran Pollock (husband Doug) of San Francisco, Calif.; and a number of nieces and nephews.
Bill was preceded in death by his parents; his wife Ruth in 2006; two sisters, Mary Doran and Maxine Doran Lathrom (husband Joe); and two brothers, Raymond Doran and Richard Doran.