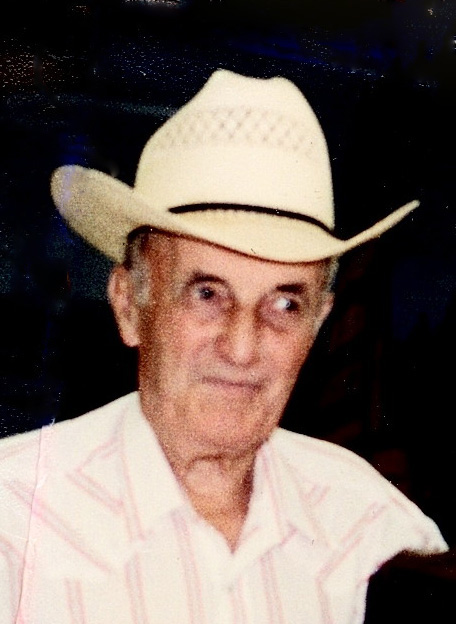 Carl Russell Clements, 90 years, entered into eternal peace on May 9, 2014 at Glenwood Healthcare in Seymour, Mo.
Carl was born Aug. 28, 1923 in Douglas County on the family farm at Jackson Mill near Ava, Mo. to John and Oma (Phillips) Clements.
Carl lived on his farm near Smallett before moving to North Kansas City, Mo. He retired from factory work there and moved back to the farm in 1967.
Carl and Melba Nash were united in marriage in 1943 in Douglas County, Mo., and to this union seven children were born.  Years later, Carl and Retha Jackson were united in marriage on Jan. 21, 1997, in Ava, and had many wonderful years together.
He was baptized as a young man in the creek by the late Tom Johnson and rededicated at Bethany Church. He was a member of the Mt. Tabor Church.
Carl was an outgoing person and never met a stranger. He cherished his grandchildren and great-grandchildren. When he saw each one, he always had pocket change for  them.  Carl enjoyed his coon hunting with his dogs, Clyde and Sandy. He always had Beagle dogs so he could run rabbits with his buddies. He never tired of watching old Westerns and listening to Hank Williams, Sr.
Carl is survived by six  children and their spouses:  Harlin and Dana Clements, Mosby, Mo., Gene and Clare Clements, Independence, Mo., Sue and Bruce Biggs, Pleasant Valley, Mo., Sharon Strong, Ava, Mo., Larry and Debbie Clements, Ava, Mo., Danny and Kim Clements, Ava, Mo.; loving grandchildren; great-grandchildren; two sisters, Nell Jennings, Kansas City, Kan., and Reba McCarty, Flemington, Mo.; many nieces, nephews and a host of other relatives and friends.
Carl was preceded in death by his parents; a sister, Ruth Hobbs; one brother, Everett Clements; and daughter, Carolyn Clements.
Funeral services for Carl were Monday, May 12, 2014, at 2 p.m. in the Clinkingbeard Funeral Home, Ava, with burial in the Mt. Tabor Cemetery. Visitation was Monday  from 1 p.m. to service time in the funeral home. Officiating was Rev. Dennis Shumate.
Online condolences may be made to www.clinkingbeardfuneral home.com.