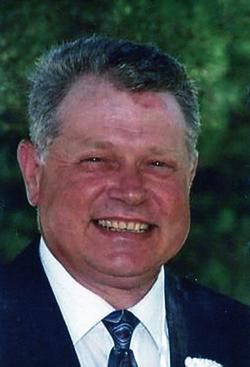 John E. Goss Jr., of Harrisonville, Mo., was born Aug. 5, 1949 in Ava, Mo., the son of John E. and Anna Marie (Blakey) Goss Sr. He departed this life on Saturday, April 26, 2014 at the Cass Regional Medical Center, Harrisonville at the age of 64 years, 8 months and 21 days.
He resided in Ava, Mo., until the family moved to Harrisonville in 1964. John graduated from Harrisonville High School in 1967. On Oct. 12, 1968, John was united in marriage to Kathleen Kay King in Harrisonville.
John was employed for 30 years in the paint department at General Motors, Fairfax plant in Kansas until his retirement in July of 2006. He was a loyal member of the Local UAW #31. John joined the Missouri National Guard in 1969 and was honored to stand guard at the lying in state of President Harry S. Truman. He was an avid fisherman, gardener, and sports fan. He was a loving husband, father, and grandfather. John loved spending time with his grandchildren and cheering them on at their sporting events. He also enjoyed spending time at his lake house having fish fries, barbecues and spending time with friends and family.
He was preceded in death by his mother.
John is survived by his wife Kathleen K. Goss of the home; two sons, Jeffrey S. Goss and wife Stephanie, Harrisonville, Mo., and Steven A. Goss and wife Tiffany, Raymore, Mo.; six grandchildren, Baylee, Jarett, Peyton, Jacob, Lucas, and Ryan; his father, John E. Goss Sr., Ava, Mo.; a brother, Jim Goss, Harrisonville, Mo.; three sisters, Rebecca Davis, Paola, Kan., Brenda Sweitzer and Linda Hetherington both of Harrisonville, Mo.; other relatives and many friends.
Funeral services were held Wednesday, April 30, 2014  at the Dickey Funeral Home, Harrisonville, Mo.  Burial was in the Orient Cemetery, Harrisonville, Mo.
The family suggests memorial contributions be made to the Alzheimer’s Association in memory of his mother.