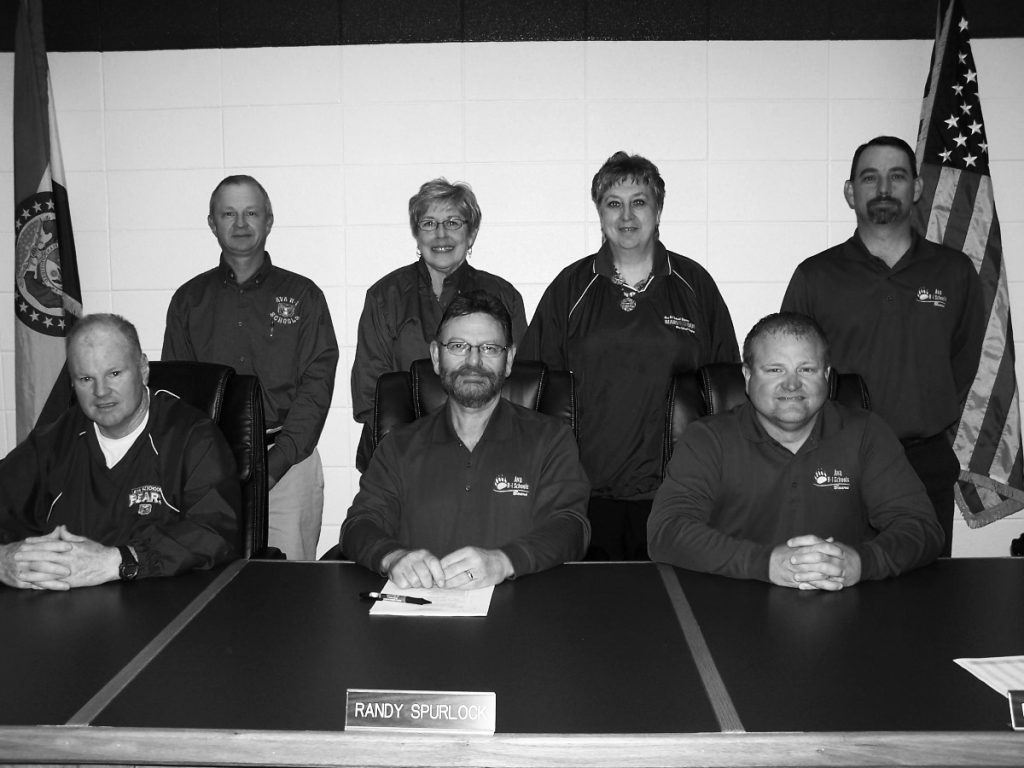 The Pledge of Allegiance of the United States of America was the first item of business for Ava R-1 School board members as they convened Tuesday evening for the April session of the board.

Prior to the 6:30 p.m. meeting, and following the municipal election held April 8, the board reorganized Tuesday evening, reinstating Randy Spurlock, Ron Wallace and Marsha Aborn –– all three incumbents ran unopposed for their position on the board.  During reorganization, the board elected officers as follows: Randy Spurlock, president; Ron Wallace, vice-president; Johnny Burkdoll, secretary; and treasurer, school bookkeeper.

Wilson explained the emergency “calling tree” will consist of local law enforcement officers, who upon receiving an emergency notice, will quickly respond to the campus site for the needs of staff and students. The system would allow one phone call to alert “a tree” of law enforcement officials to a crisis or emergency situation at Ava schools. He said the “calling tree” is slated to provide a second-line of defense for any crisis situation.

Wilson noted Douglas County Sheriff Chris Degase and Sergeant Vernon Johnson are in the process of creating a local law enforcement list for the school.

During executive session, board members accepted resignations from Jocelyn Downs, elementary school aide, and Rhonda Little, middle school math teacher. Both teachers will leave at the end of this term.

In closed the board also hired Scott Payne as coach of boys high school basketball. Payne comes to Ava from Chadwick. His duties will also include physical education and health.

Part-time personnel employed for fall are Sue Berger, speech; Jeff Martin, high school counselor; and Diana Premer, who will serve as the director of Bears Den, an afterschool program.

Dr. Wilson advised the board that Athletic Director Rex Sawyer had decided to postpone a decision about implementing a middle school girls softball program in the spring.

Sawyer reported approximately 24 students attended the first meeting; however, at this time, Sawyer said he wanted more time to review all aspects of the program before going forward. During the March meeting, Coach Sawyer had presented a proposal for starting a middle school program in the spring of 2015. At that time, the board tabled the proposal for the April session. Wilson noted Tuesday evening that Sawyer wanted more time to review the idea.

In a 6-0 vote, with an abstention from Marsha Aborn, board members tentatively approved a recent mock-up of the proposed wall covering for the fieldhouse building at the sports complex west of Ava. The wall design is being underwritten by Missouri Ozarks Community Health (MOCH) and the wrap showcases a MOCH logo and variety of sporting action figures on the wall. The board voted to accept the proposed design, as long as the following two requests were addressed by MOCH: the blue background color must be true to school colors; and the design modified to include a track athlete.

Motions to adopt were posed by Ron Wallace and Pat Henry. The board requested a final mock-up of the design before final installation.

• The board adopted the State and Federal Assurance Statements, which state the following:

(I.) The district assures a Comprehensive System of Personnel Development (CSPD) for FY 2014 has been implemented, and a CSPD plan for FY 2015 will be developed.

(III.) Private / Parochial Planning: The district assures that should students with disabilities enroll in private schools, that representatives of both the LEA and the private schools in which resident children are enrolled will meet to discuss special education needs of these children.

Motions to accept the statements were tendered by Pat Henry and Ron Wallace, and the vote 7-0.

• In a 7-0 vote, board members selected medical/health insurance through the trust group of schools, as advised by Dr. Wilson.

According to Wilson, the school’s health insurance will garner an eight percent increase as a member of the medical health insurance trust; in contrast, the consortium insurance rate is expected to go up 11 percent.

Wilson noted the trust offers a broader array of health care plans and providers, as it delivers more creative options for employees.

Motions to adopt were by Pat Henry and Marsha Aborn; the vote was 7-0 in favor.

• Revisions to the board policy manual were adopted via a 7-0 vote. Rated by level of importance, the changes adopted Tuesday evening were deemed critical and likely the result of legislative actions or recent changes to Missouri law.

Motions to accept the revisions were by Pat Henry and Dan Watson.

• The board accepted the guidance and counseling program review as given by Nancy Lawler, assistant superintendent. In the presentation, Lawler advised of the committee’s request for an additional counselor to assist with elementary and middle school issues.

With motions from Pat Henry and Ron Wallace, a vote of 7-0 accepted the report.

In the school board’s community spotlight, Principal Clint Hall recognized McDonald’s restaurant for partnering with the school on programs and supporting students in the Ava school district. Hall highlighted the fast food restaurant’s generosity for participating in the “Hamburgers for A’s” program, and donating food coupons to students who achieve special recognitions.

On behalf of the board, President Randy Spurlock presented the McDonald’s representative with a certificate of appreciation.

Assistant Superintendent Nancy Lawler advised board members that the annual retirement party for staff members is scheduled for Tuesday, May 13, at 6:30 p.m. The event is held in the cafeteria.

Readying for the 2014-15 school term, the principals provided board members with a list of proposed student handbook changes for the ensuing year.

For elementary students and parents, Principal Clint Hall cited the elementary handbook should be revised to reflect Ava has three preschool classrooms.

In addition, it was noted most of the proposed handbook revisions were programs or actions already in place in lower grades; however, they needed to be added to the handbook. Some of items included:

– Bear Cub Club program for elementary youths as a reward for those demonstrating good behavior and attendance.

– Grade standards for students in kindergarten through second-grade that now signify the following: Mastery (M), students scoring 90% or higher; Progressing (P), students making progress in an area, but yet to master; and Improvement needed (I), students not progressing toward mastery.

– Morning drop-off on the north side of the building on 10th Avenue, must be on the school side of street. Parents should not park on the residential side and walk students in to the building.

– Afterschool pickup is on 10th Avenue, where a staff member will walk a student to the pick-up car. Parents stay in cars. Students not picked up within 15 minutes will go to Bears Den. Students walking home afterschool report to the music room, where they are signed out by an older sibling or parent.

In the middle school handbook, Principal Mike Henry included the weekly or bi-weekly payment plan for cafeteria purchases and account balances, as noted in the elementary. The following changes were noted:

– Triple A Club, wherein youths are rewarded, based on Attendance, Attitude, Academics. (Good grades, no Ds or Fs; no discipline referrals; and good attendance, over 95%). Youths qualifying will be offered incentives and special trip opportu­nities.

– Student dress and appearance policy noted pajama pants are not allowed, and legging attire must be appropriately covered with a long shirt or top.

Principal Teresa Nash said the high school handbook would also incorporate the revised cafeteria payment plan. For high school students, it was proposed students will be able to carry clear or mesh backpacks in the building, with all other backpacks, book bags, satchels, etc. placed in hall or gym lockers.

– Change in the attendance policy noted the test exemption incentive would be limited to first- and third-quarter testing.

– Daily attendance points will be eliminated.

– Students assigned ISS or OSS during the year will not be eligible for quarter test exemption.

– The discipline policy was noted to change as follows, regarding Skipping Class:

Under new business, the board listened to salary recommendations for 2014-15, as presented by the salary committee. Items requested for consideration were given as follows: vertical and horizontal movement on the salary schedule; 2-2.3% increase for classified staff; and the school district will cover increases to present insurance rates.

The board will vote on the issue in June, when budget items must be finalized.

The school board will reconvene on Thursday, May 15, 6:30 p.m. in the Board of Education Room, near the Decker Library.