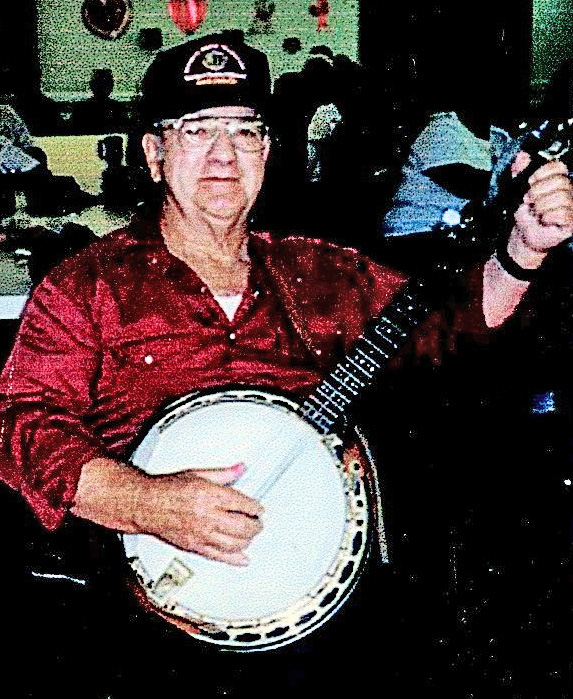 On Jan. 16, 2014, a wonderful man left us to be with God.  John Curtis Poindexter was born Jan. 26, 1934 to Roy and Mary Rosey Belle (Hawkins) Poindexter, in Everton, Mo.
After high school, Curtis joined the US Marine Corps, serving our country in combat during the Korean War. After he separated from the military, he worked as a heavy equipment operator, and a long-haul truck driver.
Curtis found joy in every aspect of life, and he had a zest for everything he did, whether it was camping during the winter in the Rio Grande Valley in south Texas in his Airstream trailer, sitting on his front porch enjoying his coffee, or sharing his unique humor with everyone he met, which he always did with a twinkle in his eye.
His favorite pastimes were playing his banjo, making sweet gospel bluegrass music with his friends, and communicating with his many friends on his Ham/CB radio, where he was best known by his handle “Coffeepot.”
Curtis was preceded in death by his parents, and his second wife, Virginia.
He is survived by his loving wife, Caroline, of Langley, Okla.; his children, Clarissa Thornton, of Monroe, Mich., Tim Poindexter and David Poindexter, both of Boliver, Mo., and Frank McIntyre of Springfield, Mo., Cheryl Johnson, of Oklahoma City, Okla., Charles Johnson, of Bartlesville, Okla., Delores Crawford, of Tulsa, Okla.; his grandchildren, Ashley Edwards, USN, and Michael Thornton, USMC; and many relatives and close friends.
Funeral services for Curtis were Tuesday, Jan. 21, at 2 p.m., in the Clinkingbeard Chapel, Ava. Burial was in the Yates Cemetery east of Ava, with full military honors by Douglas County American Legion Post 112.
Visitation was Tuesday, Jan. 21,  from 1 p.m. until service time in the funeral home. Officiating was Pastor Bill Busch. Memorials may be made to Yates Cemetery. Services are being conducted by Clinkingbeard Funeral Home, Ava, Mo.
Online condolences may be made to www.clinkingbeardfuneral home.com.