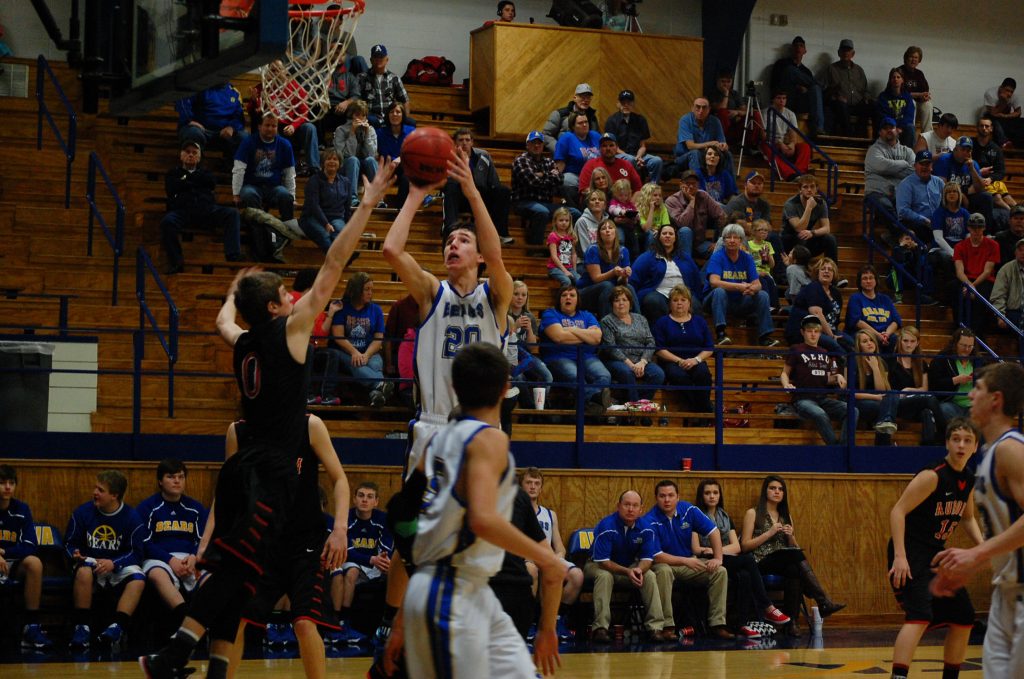 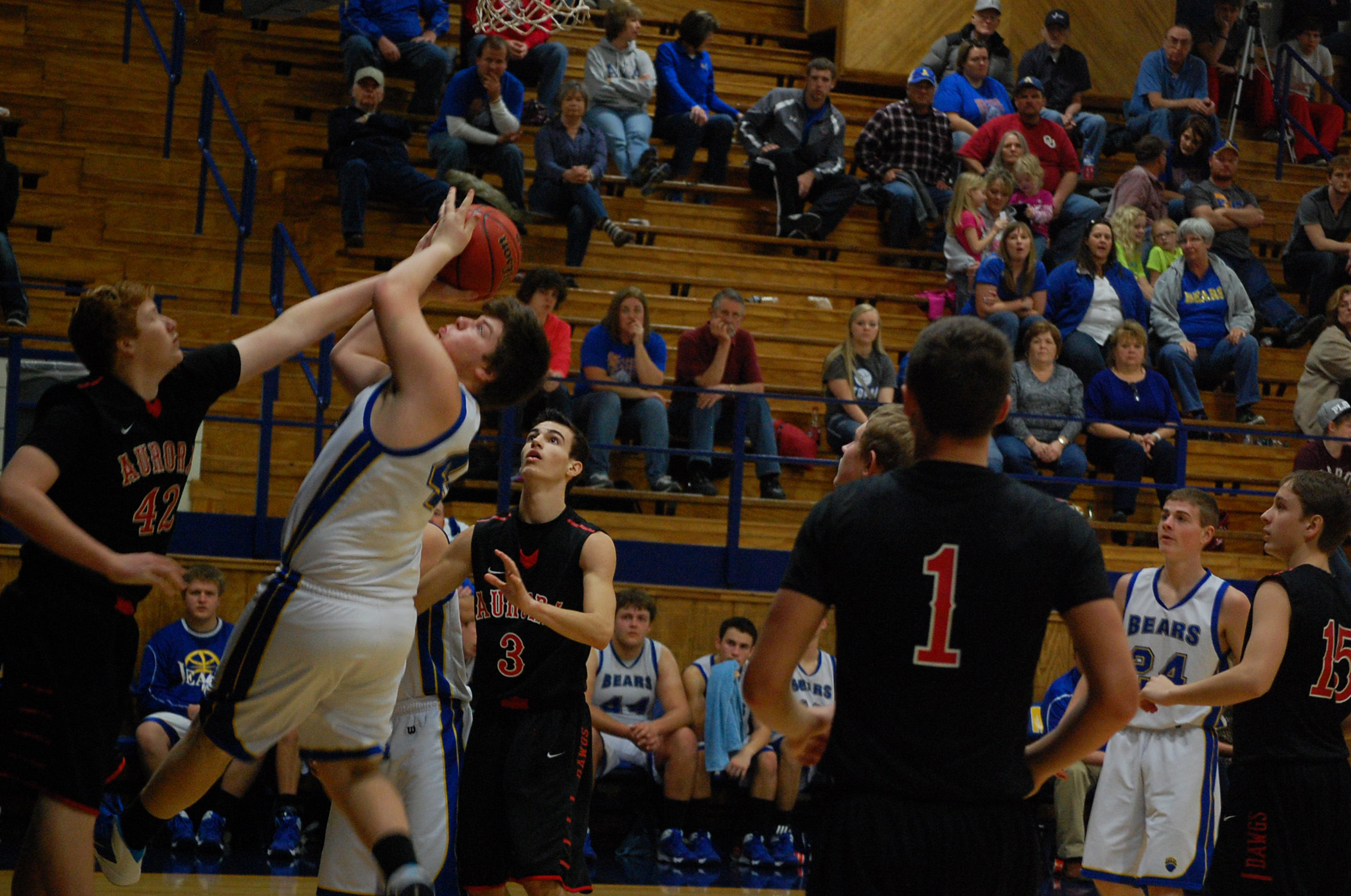 Ava’s Zach Hunsaker struggles to control the ball on a rebound in varsity action Saturday with Aurora.

The Ava Bears traveled to Mansfield last Friday night and took a nonconference contest from the Lions, 54-44.
The game had been postponed twice before due to weather.
Ava was led by 18 points from Brandon Guengerich and 16 by Cooper Emerich. Also in double-digit scoring was Ben Loge with 11.
Rounding out Ava’s scoring were Tristan Haltom 4, Seth Dobbs 3 and Cody Huff 2.
Kyle Elliott led the Lions with 13 points. However, a key to the win was Ava’s defense on 6-foot-6 Jacob Caruso who scored seven points in the first half and was held scoreless in the second half.
Coach Nathan Houk said Tristan Haltom did a great job defending Caruso and had him worn down and frustrated in the second half.
The Bears hosted Aurora in a rare Saturday afternoon game last weekend and were humbled by the Houn Dawgs who took the varsity game, 65-38.
Three games were scheduled, starting with the freshmen at 3 p.m., followed by junior varsity, then varsity action for the nightcap. 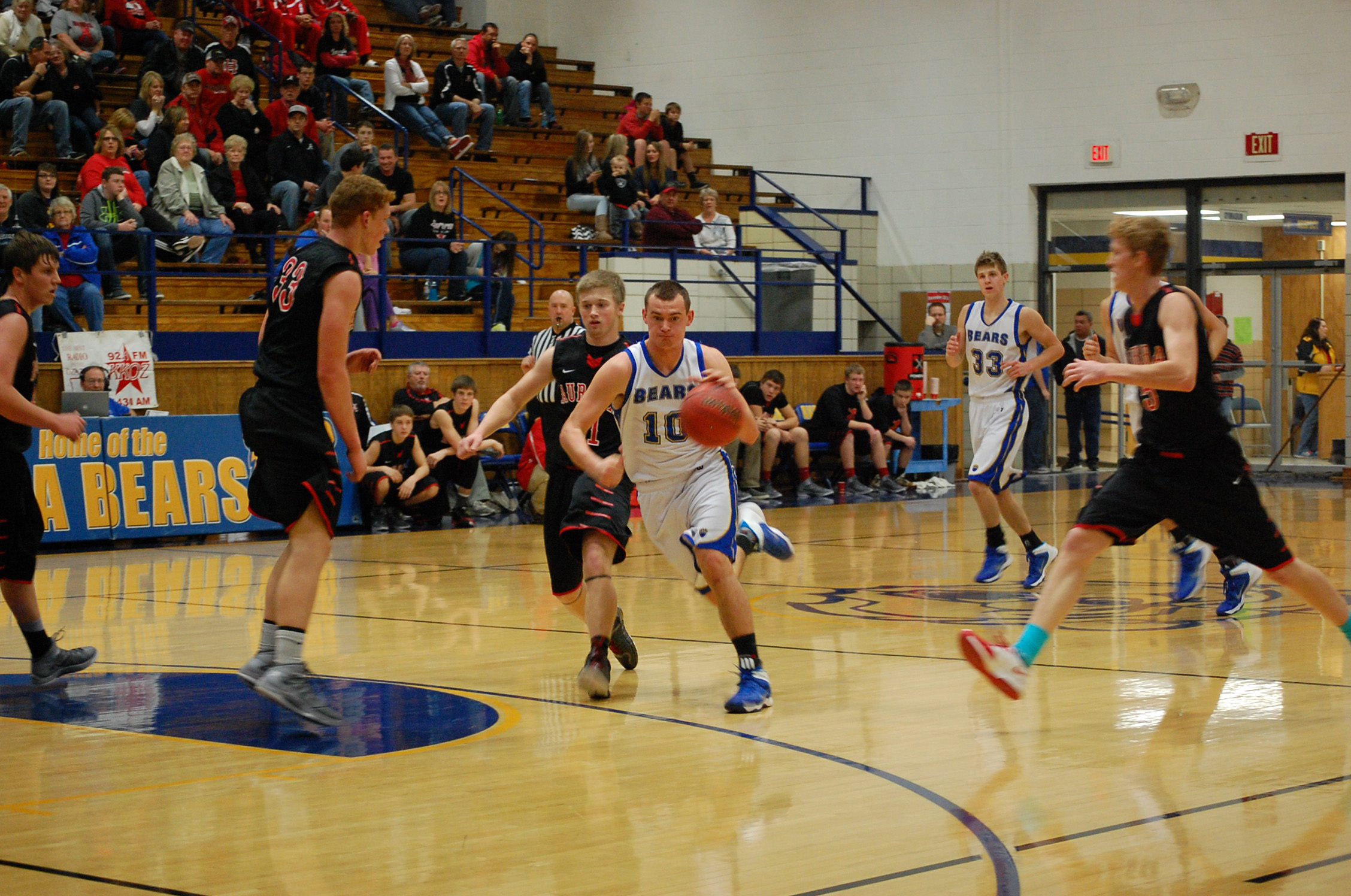 Ben Loge dribbles past an Aurora defender in the varsity game here Saturday. At far right for Ava is Brandon Guengerich (33).

The afternoon affair was also to have included Hoopcoming, but with schools closed since before Christmas because of snow and bad weather, Hoopcoming was postponed until a later date.
The Ava freshmen lost to Aurora but the junior varsity won a narrow 21-20 victory in a low-scoring contest.
With the score tied at 15-all, Ava’s Shannon Porter hit four consecutive free throws to put the Bears up 19-15.
Aurora hit a 3-point shot to pull within one, 21-20, with 29 seconds left, but that’s where the game would end, as the Houn Dawgs missed scoring opportunities in the final seconds of play.
In varsity action, the Bears fell behind 24-6 in the opening quarter and never overcame the deficit, trailing 39-14 at halftime.
Emerich led the Bears with 18 points, but was the only Bear in double figures.
Aurora had three players in double digits, led by 6’5″ Cory Gregory with 16.
Others scoring for Ava were Loge 8, Huff 7, Guengerich 4 and John Luebbering 1.
On Tuesday night, the Bears traveled to Conway where they would see a 12-point halftime lead melt away. Ava lost to the Conway Bears, 67-60, to slip to 6-8 overall.
Coach Nathan Houk said Conway’s box press resulted in turnovers that were the difference in the game.
Conway rallied back to take the lead twice in the second half for the win.
Loge led the Ava Bears with 19 points, Emerich had 13 and Guengerich and Haltom had 10 each. Huff added 3 points and Anthony Rosas had 2.
A turning point for the Conway Bears was junior Nathan Neal’s 19 second-half points. Coach Houk said the 6’2″ Neal killed Ava on the offensive boards in the second half, scoring all but one of his 20 points in the second half.
Houk pointed out that Conway is only 4-7 on the year, but they have played a really tough schedule and are a very good team.
Josh Cunningham led Conway with 23 points on the night.
The Bears will be on the road to Houston Friday for SCA action with the Tigers, and will travel to Marion C. Early (Morrisville) on Tuesday night. Both schedules include 9th grade, JV and varsity action.
Ava’s junior varsity is also involved in the Fair Grove JV tournament this week.
Ava’s 9th grade team is also playing in a freshman tournament at Willow Springs next week.