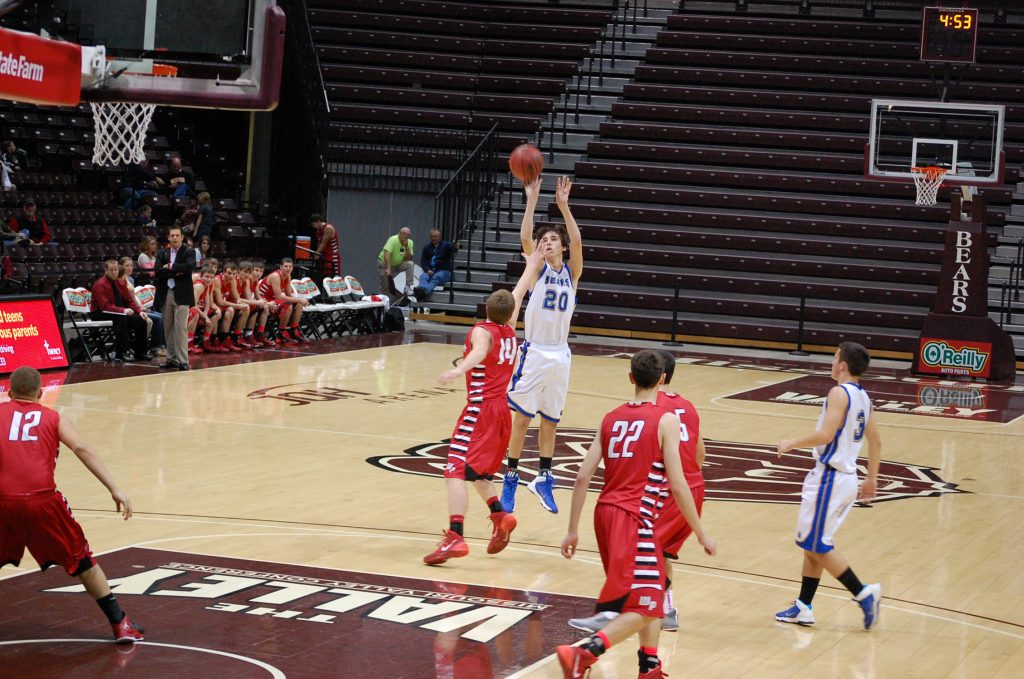 Ava 6-foot-4 freshman Anthony Rosas can also shoot from outside, as demonstrated here against West Plains in the Blue & Gold Tournament. 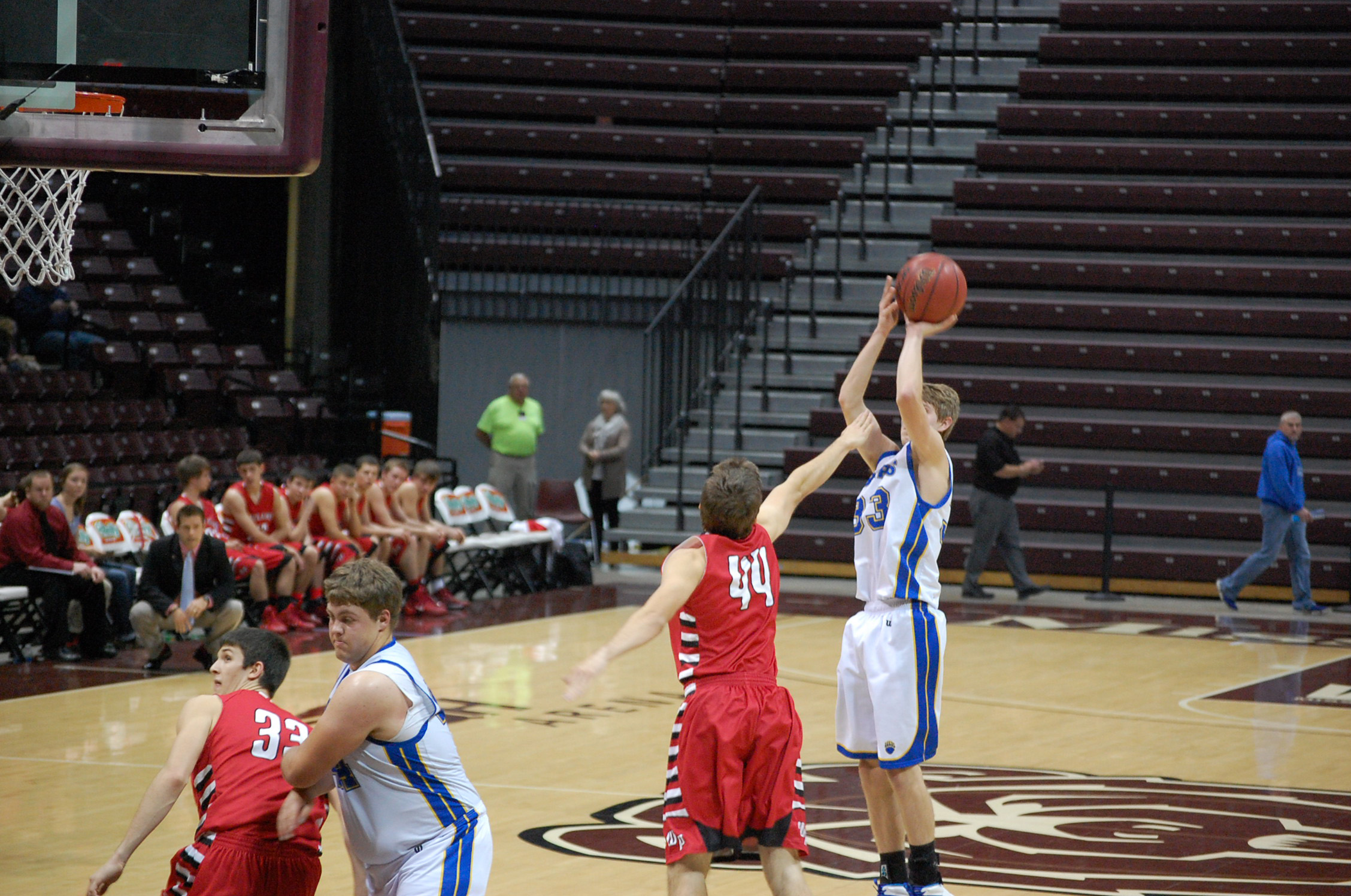 Chalk up two points for Brandon Guengerich on this shot at the Blue & Gold. Big Tristan Haltom stands his ground against a Zizzer at left.

The Ava Bears lost to West Plains in the first round of the Springfield Blue & Gold Tournament last Thursday, 70-55.
The loss placed the Bears in the consolation bracket where they would win their next two games to advance to the consolation championship game that was being played Monday night.
Due to the holiday schedule, the result of that game was not available as the Herald went to press this week.
The Bears faced Willow Springs on Friday on the left-hand side of the tournament bracket, winning 63-50.
That gave the Ava Bears an opportunity to play again on Saturday where they would take on the Lebanon Yellowjackets at 5:30, in the consolation semifinals.
Ava defeated Lebanon, 53-48, and would face Camdenton on Monday for the consolation championship.
At the Blue and Gold, the Bears welcomed junior Cody Huff to the team. Huff missed the early part of the season due to a football injury, and was just released to play last week. 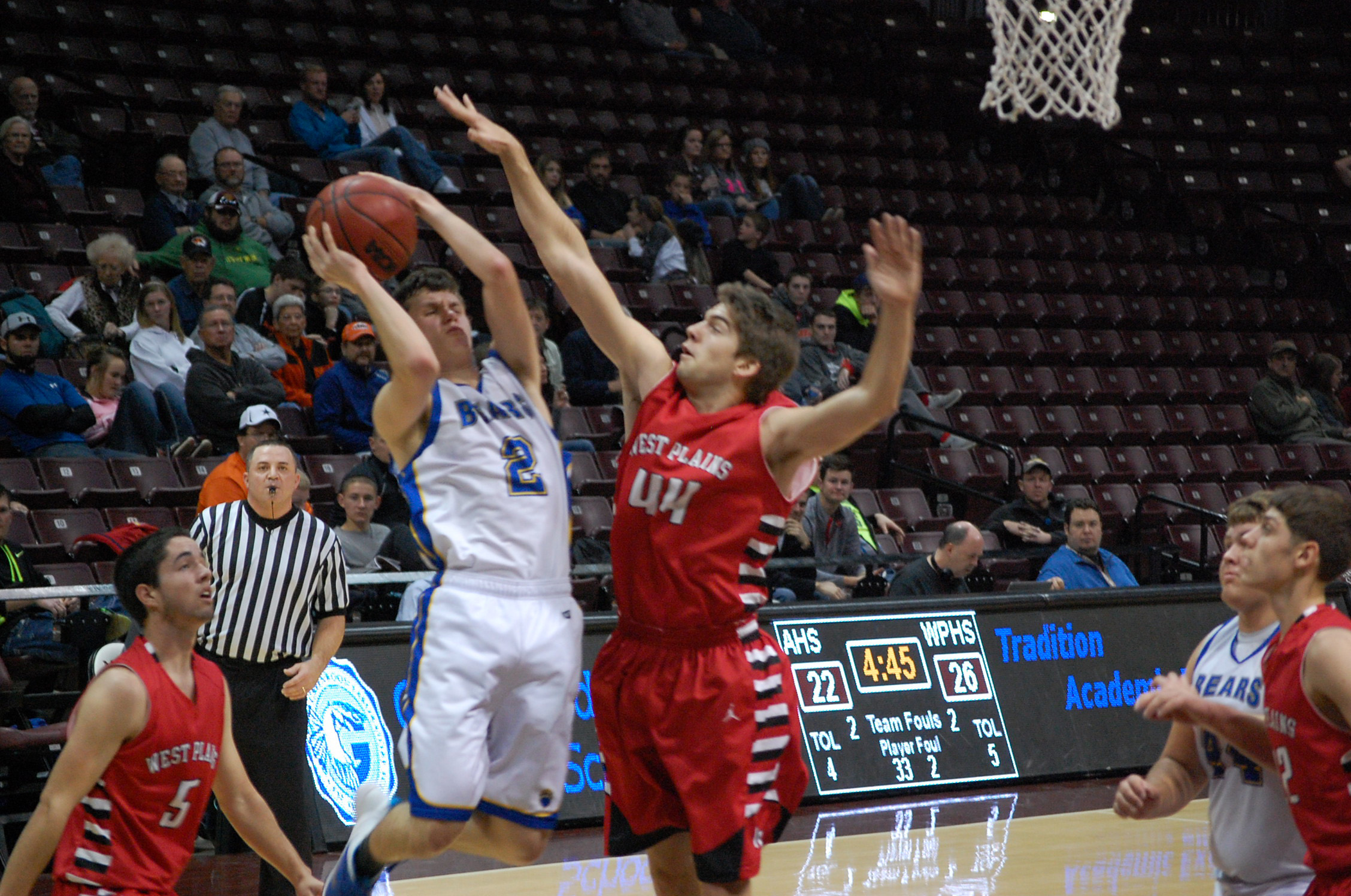 Ava’s Seth Dobbs knows he’s about to be hammered as he takes the ball in low against West Plains at the Blue & Gold Tournament in Springfield on Thursday.

The Herald has been unable to obtain individual scoring this week due to the holidays, except as reported by the Springfield News-Leader.
Scoring for the West Plains game tallied only 52 of Ava’s 55 points. Those scores listed were: Brandon Guengerich 16, Cooper Emerich 14, Ben Loge 8, Seth Dobbs 4, Shannon Porter 4, Tristan Haltom 4, and Anthony Rosas 2.
Scoring for the Ava Bears in the game with the Willow Springs Bears on Friday has Emerich with 21, followed by Loge 16, Guengerich 6, Cody Huff 6, Dobbs 5, Rosas 4, Haltom 3 and Porter 2.
No individual scoring was available for the Bears in the Lebanon game on Saturday.
Lady Bears at Lebanon
The Ava Lady Bears played in the Lebanon Central Bank Holiday Tournament last week.
The Ava girls lost to Crocker, 66-47, in first round play last Monday and no other results have been made available.