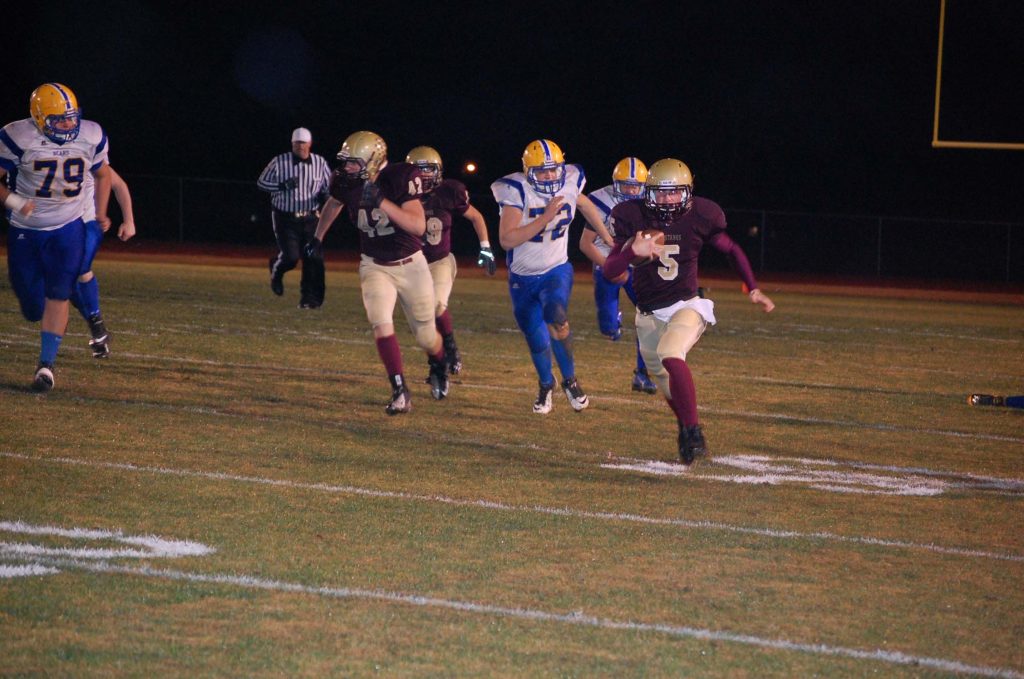 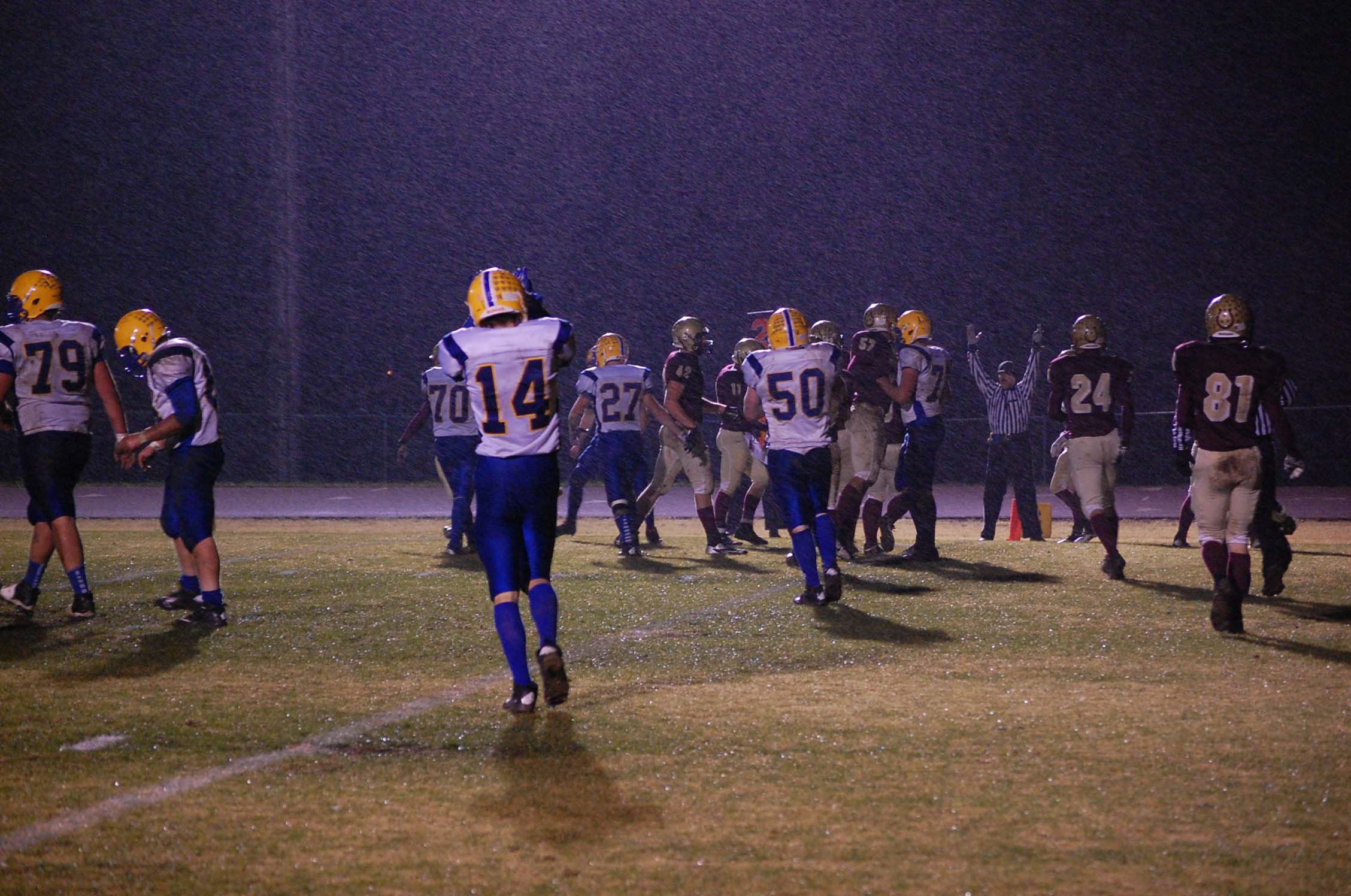 The 2013 football season ended for the Ava Bears Monday night in the Class 3, District 3 championship game at Eldon.
The Mustangs claimed the district plaque with a 19-14 win over the Bears. Ava has traveled to Eldon the past two seasons in district play. Last year Ava was eliminated in the first round.
The Bears finish the season with an overall record of 7-5, and were 4-3 in the SCA.
Like last year, the game Monday night was played against a strong, cold north wind. However, this year a driving, almost horizontal rain accompanied the wind, creating bitter conditions for players and spectators alike.
Four of Ava’s last five games were played in the rain or on a muddy field resulting from previous rainfall.
Eldon received the opening kickoff and scored on the second play from scrimmage, on a 41-yard run by quarterback Wyatt Greenwalt. Levi Shinn kicked the extra point to put the Mustangs up 7-0 before the clock had hardly started.
The Bears came right back with a 65-yard drive and scored on a 3-yard run by Kane Thompson at the 5:53 mark in the first quarter, and Brett Vinson’s kick tied the score at 7-all.
With 53 seconds left in the second quarter, Dalton Lister broke a 39-yard touchdown run to put the Mustangs on top 13-7. The snap from center was mishandled by the holder, and the extra point attempt was no good.
The third quarter was scoreless when an Eldon touchdown was negated by a holding penalty, but the Mustangs increased their lead to 19-7 with 7:03 remaining in the game on a 6-yard run by Raymond Kwok, completing a 56-yard drive.
The Mustangs attempted a pass for the 2-point conversion, which fell incomplete.
The Bears came right back 2 minutes later with a 65-yard drive that resulted in a 17-yard touchdown by Thompson, and Vinson’s kick trimmed the Eldon lead to the final margin of 19-14.
The Bears had 300 yards rushing on Monday night, with sophomore Morgan Smith turning in another outstanding performance, with 180 yards on the night, all on the ground.
Defensively, Buster Davis had 16 tackles and Jesse Dean had 13. Nate Bray had 10 tackles including a sack of the quarterback, and Vinson had big loss-yard tackles for the Bears.
The Bears got to the district championship game by defeating the Springfield Catholic Fightin’ Irish here last Wednesday night, 12-7.
The Bears got to this game by taking a 38-0 win from winless Buffalo while the Irish had taken Rogersville to three overtime periods before beating the Wildcats 13-7 on the previous Thursday. 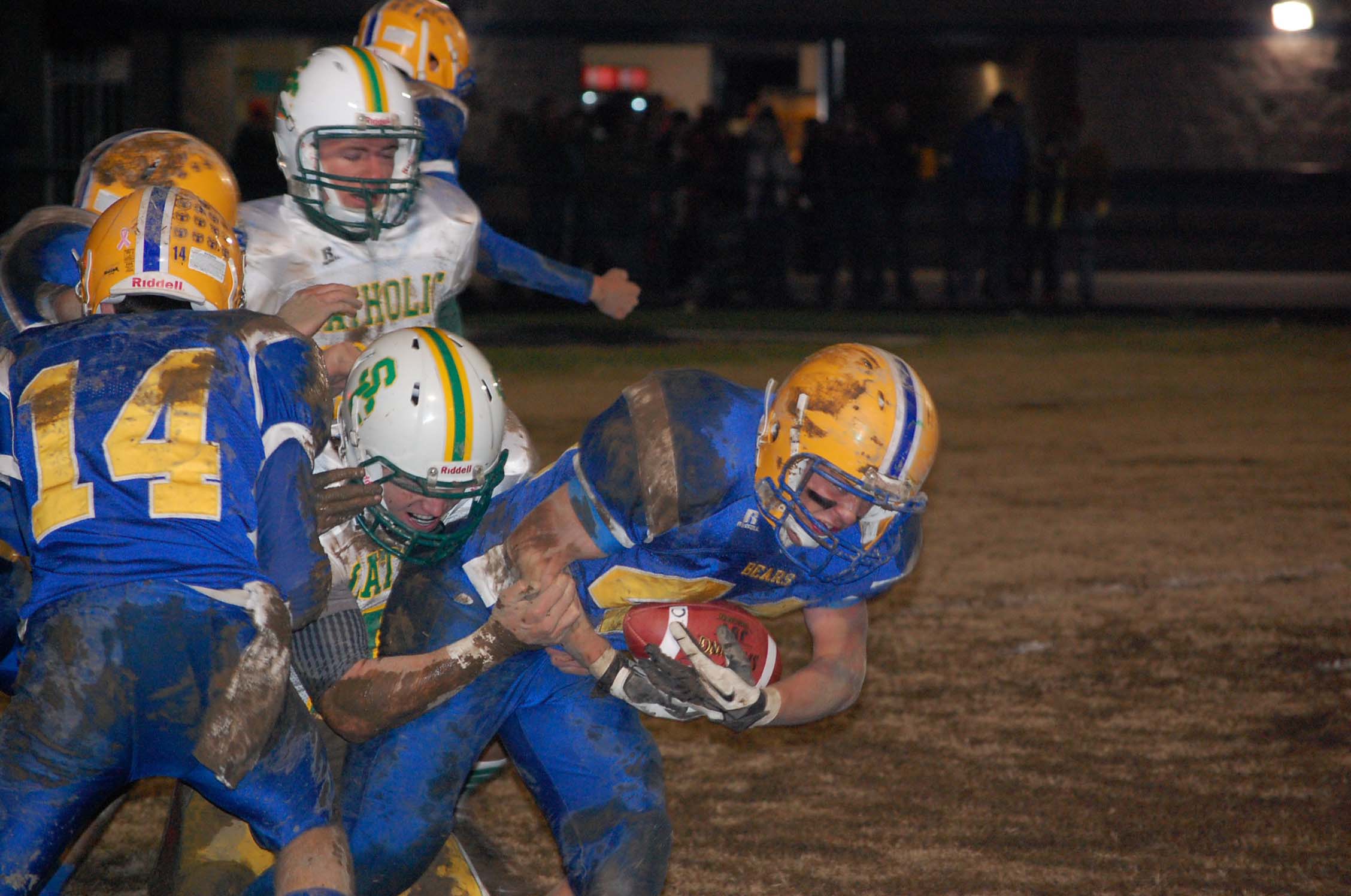 The Bears and the Irish hooked up in a defensive  battle on a rain-soaked field that had not recovered from the previous week, but the night would belong to Ava.
After a scoreless first quarter, Catholic got on the board first at 6:57 in the second quarter when quarterback Jack Jones found  his favorite receiver, Jacob Deragowski  wide open in the end zone. Brett Garner’s kick gave the Irish a 7-0 lead.
The Catholic score resulted from an Ava fumble that was recovered by the Irish at the Ava 42-yard line.
The Bears retaliated on their next possession, going 64 yards to score on a 2-yard keeper by quarterback Cody Huff. Vinson’s kick was no good, and Catholic held a 7-6 lead that would hold up until less than 2 minutes left in the game when the Bears would penetrate the goal line once again, with Huff again scoring the touchdown on a 4-yard plunge.
Ava lined up at the 3-yard line to attempt the 2-point conversion, but consecutive procedure penalties backed the Bears up to the 13-yard line. Huff completed a pass to Caleb McFarlin at the 5-yard line but he was stopped there, short of the goal. 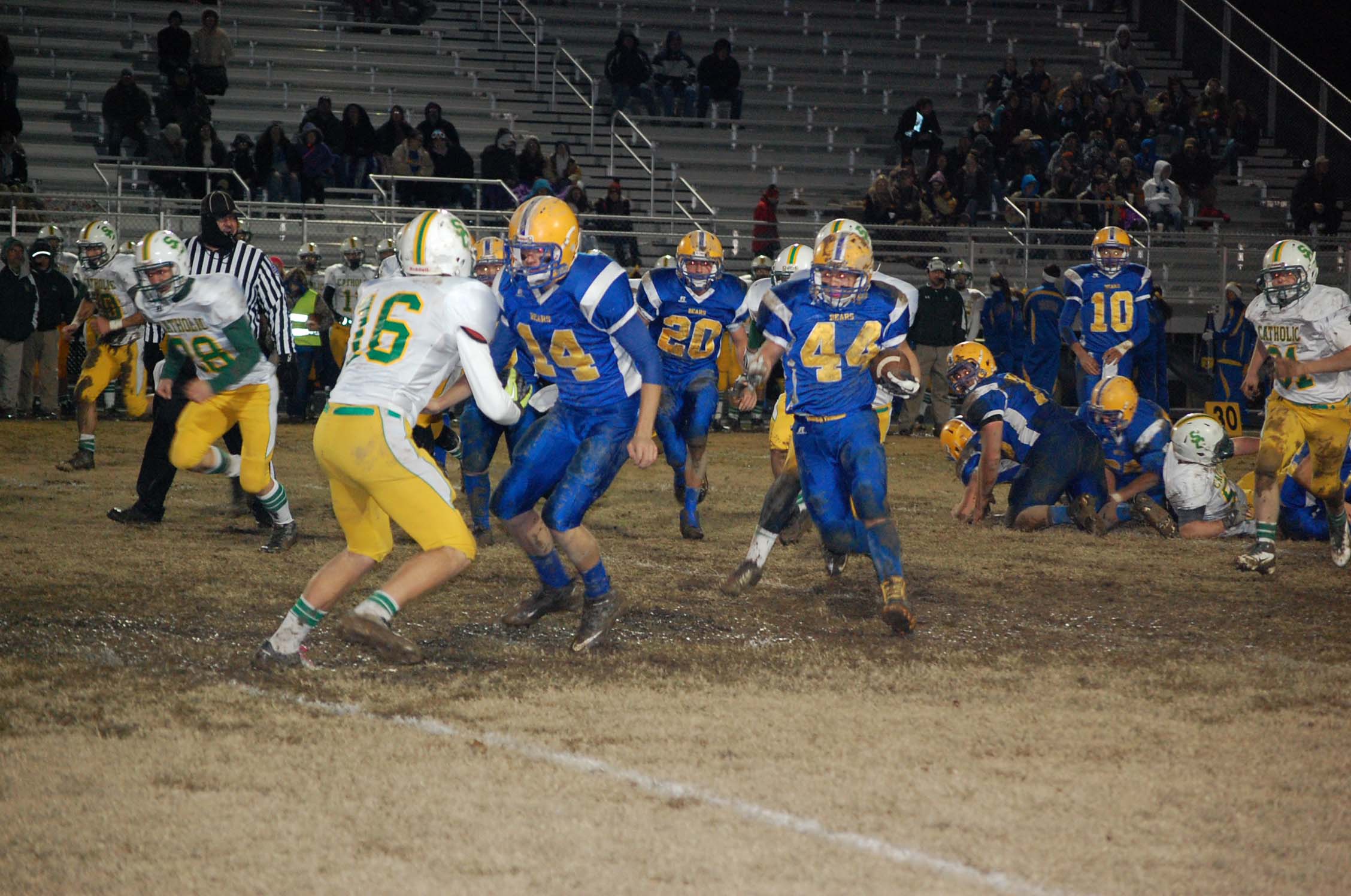 With a minute and a half on the clock, the Irish began their final drive on their own 43-yard line, but a big sack of Jones backed them up to a second-and-19 at the 34. Good pass defense by Ava resulted in consecutive incomplete passes, and Ava would take the ball back and run out the clock for the win.
Morgan Smith was once again Ava’s leading rusher, carrying 28 times for 181 yards. Huff had 20 yards on eight carries, including the two touchdowns.
Ava had total offense of 351 yards including 334 on the ground and 17 through the air.
This compares with 49 yards rushing for Catholic and 122 passing, for total offense of 171 yards.
Defensively, Davis had eight tackles for Ava and  Dean and Bray had seven each. Bray had two tackles for a loss and Dean had one for a loss.
Tristan Haltom had five tackles, two of them for losses, and Smith had four tackles, plus his fifth interception of the season.
Following Monday’s loss to Eldon, Coach Dan Swofford had nothing but praise for his 2013 team.
Swofford felt the Bears’ defense took Eldon out of their game plan, but the Mustangs still managed to win the game.
Swofford said the Bears finished the season with few seniors on the field, and he is already looking forward to next year.
The Bears outscored their opponents 303-157, and with the exception of a 47-13 loss to Mtn. View-Liberty,  the Bears were on the winning end of every lopsided score.