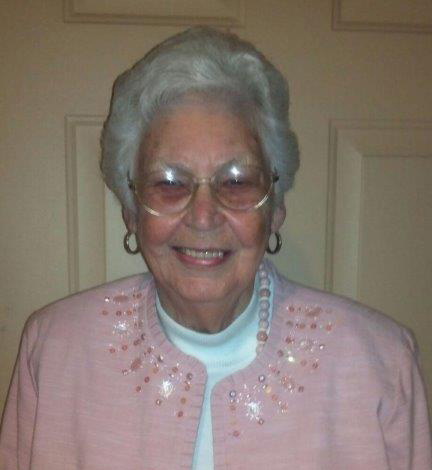 Lena Fern Pierce, 89 years, passed to heaven on Nov. 3, 2013 at Mercy Hospital in Springfield, Mo., with her family by her side.
Lena was born Aug. 2, 1924 in McClurg, Mo., to William “Bill” Raleigh and Carrie Jessie (Jenkins) Jones.
Lena was a resident of the Ava community for many years. On Aug. 31, 1944, Lena and Roy Warren Pierce were united in marriage in Mtn. Home, Ark., and to this union one daughter, Vicki, was born.
Lena began her career in education in 1941 and retired in 1991 after 50 years of service in the the public school system. She graduated from Ava High School in 1941 and received her bachelor’s in education from SMS in 1957. She then received her masters in elementary administration from the University of Missouri-Columbia in 1967.
During her 50 years she taught in Ozark and Taney counties in one room school houses. Lena taught at Plainview school for 17 years with 11 of those as principal, and at Ava Schools for 25 years with six of those as principal.
Upon her retirement Lena continued  working on legislative concerns of retired educators as well as current teachers. She encouraged her family to pursue their educational potentials.
She was member of the Ava General Baptist Church and served on various committees. She taught Sunday School, but, the ministry closest to her heart was serving dinners at the church for grieving families.
Her love was unconditional for her family. The joy of her heart was her great-grandchildren, Alex, Morgan and Sutton.
Lena was preceded in death by her parents, her husband, Roy in 2000 and a sister, Maxine Tate.
Lena is survived by a daughter and husband, Vicki and Danny Yeary, Ava, Mo.; three grandchildren, Shannon (Yeary) and Gavin Cotsworth, Overland Park, Kan., Nathan Yeary, Ava, Mo., and Jarrin Yeary, Colorado Springs, Colo.; three great-grandchildren, Alex and Morgan Yeary, and Sutton Cotsworth; two brothers and their wives, Oral Lee and Mary Jones, Oklahoma, and Ray and Laura Jones, Montana; a special cousin, Norman Jenkins, of Washington; nieces, nephews and a host of other relatives and friends.
Funeral services for Lena will be Friday, Nov. 8, at 2 p.m. in the Clinkingbeard Funeral Home, Ava, Mo., with burial in the Bethel Cemetery at McClurg.
Visitation will be Thursday from 6 to 7:30 p.m. in the funeral home. Officiating will be Pastor Oren Alcorn and the Rev. Marvin Wray. Memorials may be made to Douglas/Ozark County Retired Teacher’s Association or donor’s choice of charity.
Online condolences may be made to www.clinkingbeardfuneral home.com.