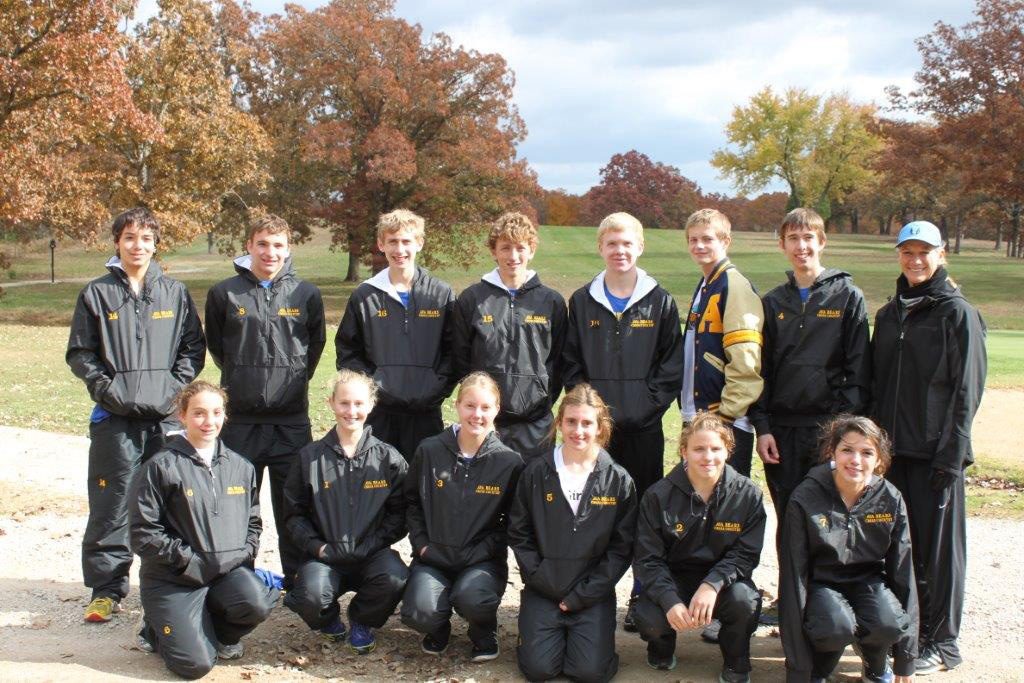 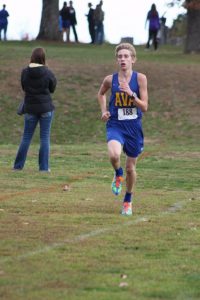 Ava sophomore Caleb Stillings owned the day at the Class 2 District 6 Cross Country Championships as he set a new course record of 17:03 and won by 15 seconds over second place finisher, John Burd, from Mtn. Grove.
Burd had previously beaten Stillings in five meets this year, including Ava’s home meet on Monday, where Burd had edged Caleb by three seconds.  Burd’s time at districts was 17:18.
Stillings took the lead  at the mile mark and never looked back.  He had a 7-second lead over Liberty’s Daylin Quinn with 900 meters left in the race.  This was Caleb’s second fastest time of the season.  He was 1 minute 5 seconds faster than his time from the Willow Invitational in early September, held on this same Willow Springs course.
Quinn had also previously beaten Caleb in two of the regular season meets.  Quinn finished in third with a time of 17:29.
Ava senior Jordan Dimirsky had a fine race also and placed ninth gaining five spots after the 2-mile mark.  Jordan’s time was 18:08 which beat his first Willow time by 29 seconds.
Freshmen Jacob Luebbering also placed in the top 15 qualifiers by setting a career personal record by 15 seconds, finishing in 18:19.  His finish bettered his earlier Willow time by 1 minute 4 seconds.
On the girls’ side, sophomore Bailey Ray ran an astounding 5 minutes 19 seconds faster than the first time she ran the Willow Springs course.  Bailey ran a 22:30 to place sixth overall in the girls’ varsity race.  That is Bailey’s sixth career PR of the season.
Junior Megan Cooper also qualified for the state meet with a career PR of 23:04, 4 minutes and 44 seconds faster than the September Willow meet.  Megan finished in the 10th spot.
All five of these outstanding cross country runners placed in the top 15, thus qualifying for the state championships.
The state championships will be held on Saturday, Nov. 9, at the Oak Hills Golf Course in Jefferson City.
Ava will compete in Class 2, with the boys running at 9 a.m. and the girls at 10:15 a.m.
As a team, both the boys and girls teams placed 4th.
Strafford continued their domination in both genders with the Strafford boys scoring 44 points over 2nd place Liberty with 63 points.  Mountain Grove scored 70 points for 3rd place and Ava was 4th with 76 points.  Fair Grove was 5th with 131 points, Alton 6th with 137 and Conway 7th with 194.
The other three schools competing, Doniphan, Willow Springs, and Seymour, did not have a full 5-man squad.
Ava’s Hayden Schuster, sophomore, finished in the 32nd spot with a time of 20:15, an improvement of 58 seconds, senior John Vineyard improved by 1 minute 43 seconds and finished in 36th with a time of 20:41.  Sophomore Sage Clunn improved his time by 1 minute 39 seconds to finish in 38th with a time of 20:46.  And Senior Garrit Swainston improved by 33 seconds and had a new career PR of 21:37 to place 43rd.  There were 53 boys and 40 girls competing in the Class 2 district races.
The Strafford girls scored a low 35 points, with  Rachel Bareford earning the district champion title  finishing in 20:39. Her teammate McKenzi Maples took 2nd.
The Alton Lady Comets placed 2nd with 67 points, 3rd place was Fair Grove that barely slipped up on Ava Lady Bears by a one point difference with 76 points to Ava’s 77.
Mountain Grove finished in 5th with 97 points.
There were 40 girls competing in the district girls’ race.
Ava’s Kayla Cooper, a sophomore, ran the course in 24:28 an improvement of 43 seconds over September’s Willow meet.  Kayla placed 17th  Freshman Madison Schuster set a career PR by 42 seconds, finishing in 31st with a time of 27:15.  Jimilynn Raybould improved her time by 24 seconds to place 32nd in a time of 27:25. And Julieanna Baker finished in 36th with a new career PR of 28:13, an improvement of 1 min 41 seconds.