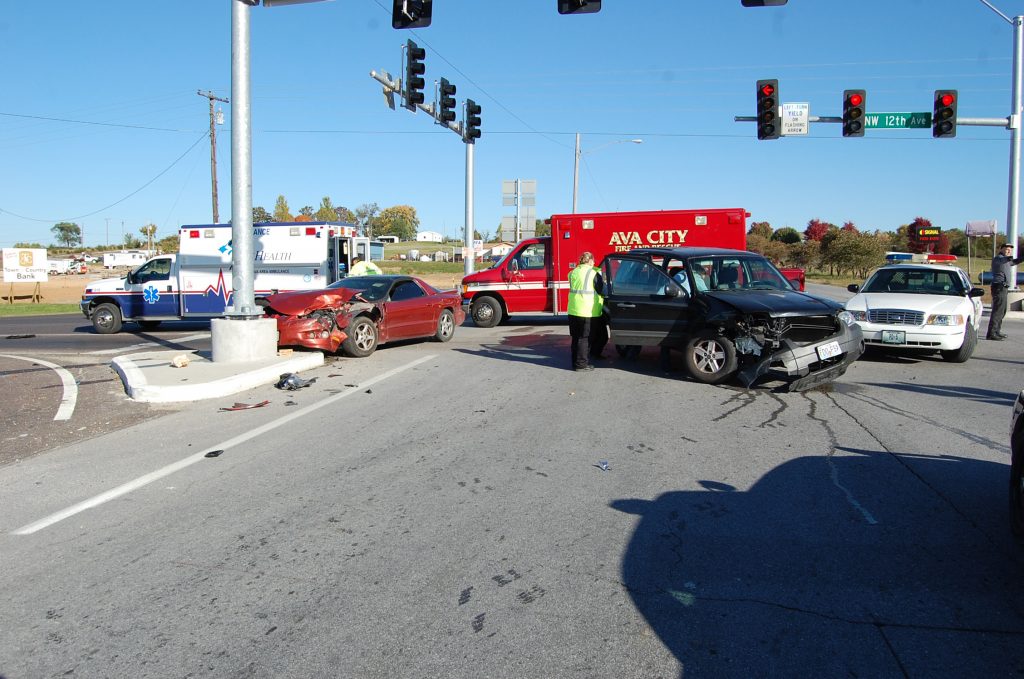 A two-vehicle crash at the intersection of Highways 5 and 14 in Ava Sunday morning sent one driver to the hospital and resulted in other minor injuries.

One driver was taken to the hospital by ambulance following a two-vehicle crash at the intersection of Highways 5 and 14 in Ava Sunday morning.
Ava Police reported that the wreck occurred at 9:35 a.m. as a westbound 2007 Ford driven by Junior Marriott, 47, of Ava collided with a southbound 2001 Pontiac driven by Wade A. Woods, 25.
After the collision, the Woods car also hit a utility pole in the intersection.
Marriott was taken to Cox South Hospital in Springfield by Cox Ambulance-Ava.
The other driver, as well as passengers, were treated at the scene but refused transport.
Ava Policeman Brenda Dinwiddie investigated the wreck and was assisted by the Douglas County Sheriff’s Department and Ava City Fire Department.
A rural Seymour man, William H. Hughes, 84, died Friday in a wreck on U.S. 60 in Rogersville.
The Missouri State Highway Patrol reported that Hughes was traveling east on U.S. 60 in a 2009 Chevrolet Impala and collided head-on with a 2003 Chevrolet Silverado driven west in the eastbound lane of the four-lane highway.
The driver of the Chevrolet pickup, Chad L. Bybee, 32, of Rogersville, was charged with driving while intoxicated and has also been charged with involuntary manslaughter in the first degree and second-degree assault, both felonies, according to published reports. Bybee could also face additional charges.
Passengers in the Bybee truck, both daughters of the driver, were also injured.
Adaline H. Bybee, 6, sustained moderate injuries, and Gabrielle A. Bybee, 8, suffered serious injuries. Both were taken by ambulance to Cox South Hospital in Springfield.
The Troop D Highway Patrol report indicates both girls were properly belted in.
The wreck occurred at 7 p.m. and was investigated by Highway Patrol Tpr. Chase Stallcup, assisted by Tpr. Michael Cary and Sgt. Scott Richardson.
Reports say Bybee was a teacher at Logan-Rogersville High School. It was reported his blood-alcohol level was more than twice the legal limit, more than two hours after the crash.
Funeral services for Mr. Hughes will be at 10 a.m. Friday in Ava.