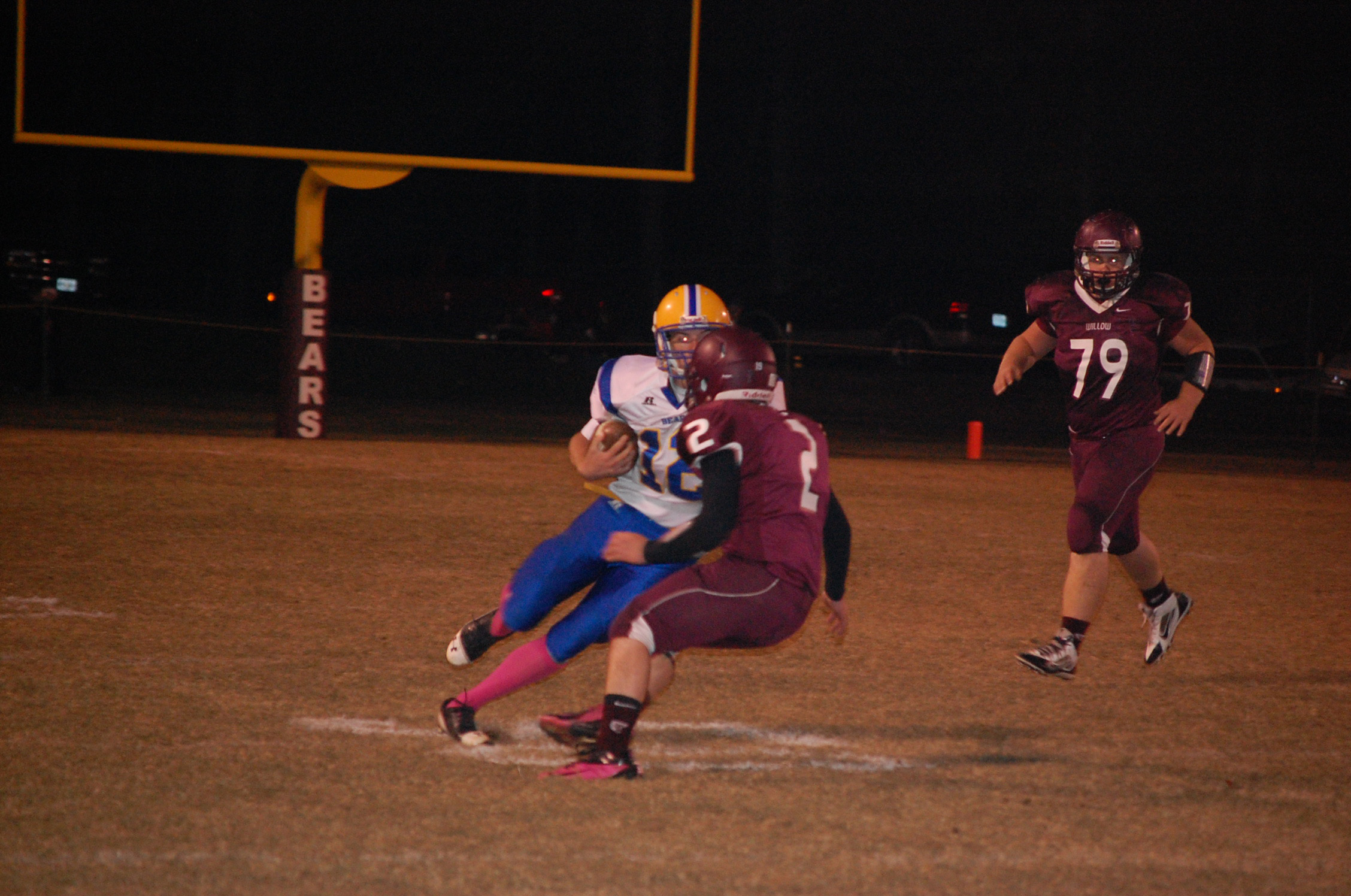 The Ava Bears wrapped up the nine-week regular football season with a 14-0 win over Willow Springs last Friday night and will begin district play at home tonight (Thursday).
After nine weeks of play, the Bears are ranked second in Class 3, District 3, and will host Buffalo in tonight’s contest. The Bison are 0-9 coming into tonight’s game.
If one factor were to be named as a key to the win Friday it would be the adjustments made to overcome adversity, and especially the play of Ava’s younger players who stepped up to fill the void.
Senior runningback Chase Willis cramped up during warm-ups and never entered the game Friday. Early in the game, senior lineman Clayton Clouse suffered a knee injury and did not return, and before halftime senior Buster Davis, an ever-present foundation of Ava’s defense, suffered a ribs injury that sidelined him for the night. In Willis’ absence, sophomore Morgan Smith rushed for 68 yards and a touchdown, and senior Brett Vinson carried 10 times for 61 yards and a 2-point conversion.
Smith also had a good night on the defensive side of the line, recording nine tackles and an interception.
Vinson had a fumble recovery, six tackles, one sack and two tackles for losses. And Nate Bray had 10 tackles including three for losses, and an interception.
Kane Thompson also had a pass interception for Ava early in the game.
Ava had 206 total yards of offense, including 189 on the ground and 17 yards passing.
The Ava Bears and Willow Springs Bears played a scoreless first quarter before Ava took a 6-0 lead on a 3-yard run by quarterback Cody Huff at the 8:18 mark in the second quarter.
That score was set up by a 17-yard pass from Huff to Vinson on 4th and 10 at the 19-yard line.
Each team would record a turnover before the half ended with Ava in the lead, 6-0.
The third quarter would also be a scoreless tie, but Ava would add to its lead with 7:18 remaining in the fourth quarter on a 6-yard run by Smith.
Vinson added the two-point conversion run to put the Bears up 14-0, which would be the final score.
The Bears made it hard on themselves, having to go 24 yards to pick up the touchdown after achieving a first-and-goal at the Willow Springs 9-yard line.
From the Willow Springs 9, Huff carried to the 2-yard line but the Bears were flagged for assisting the runner, and backed up to the 7-yard line.
On second-and-goal from the 6, Huff carried into the end zone, but the Bears were called for an illegal shift, and backed up to the 11-yard line of Willow Springs.
Smith carried to the 7, then scored from the 6-yard line.
Coach Dan Swofford and the Ava coaching staff are hoping to let some of the injuries heal in this first-round game with winless Buffalo, then regroup for the semifinals game next Wednesday night against either Springfield Catholic or Rogersville.
However, Coach Swofford says Buffalo is “bigger than us and faster than us”, and he is not taking anything for granted in tonight’s game.