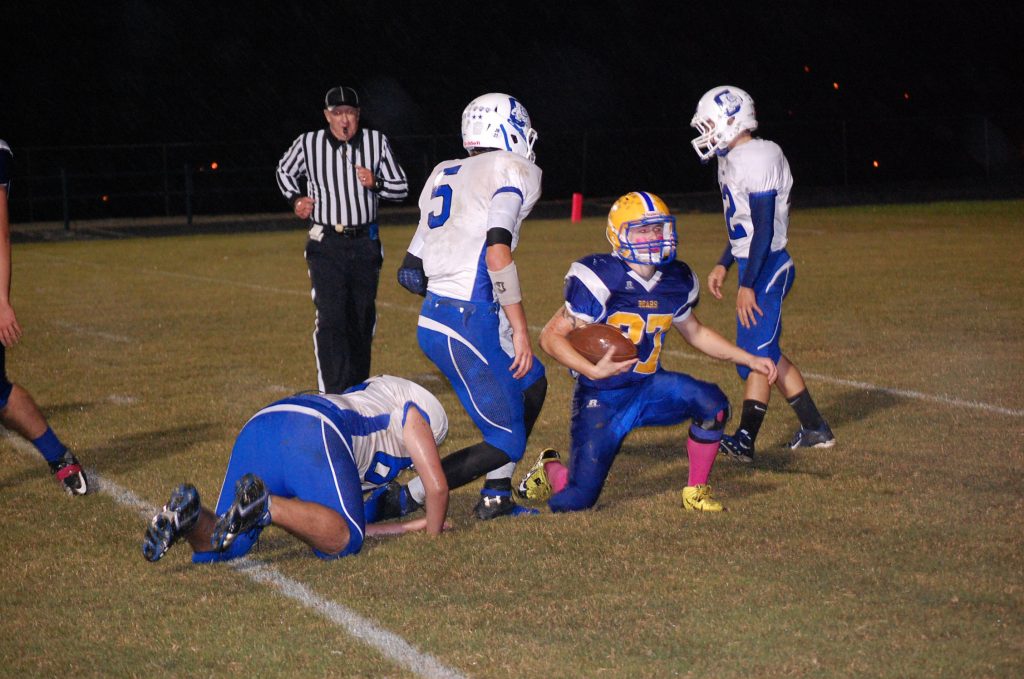 Brett Vinson set up an Ava touchdown Friday night with a 21-yard run that ended at the Cabool 3-yard line. 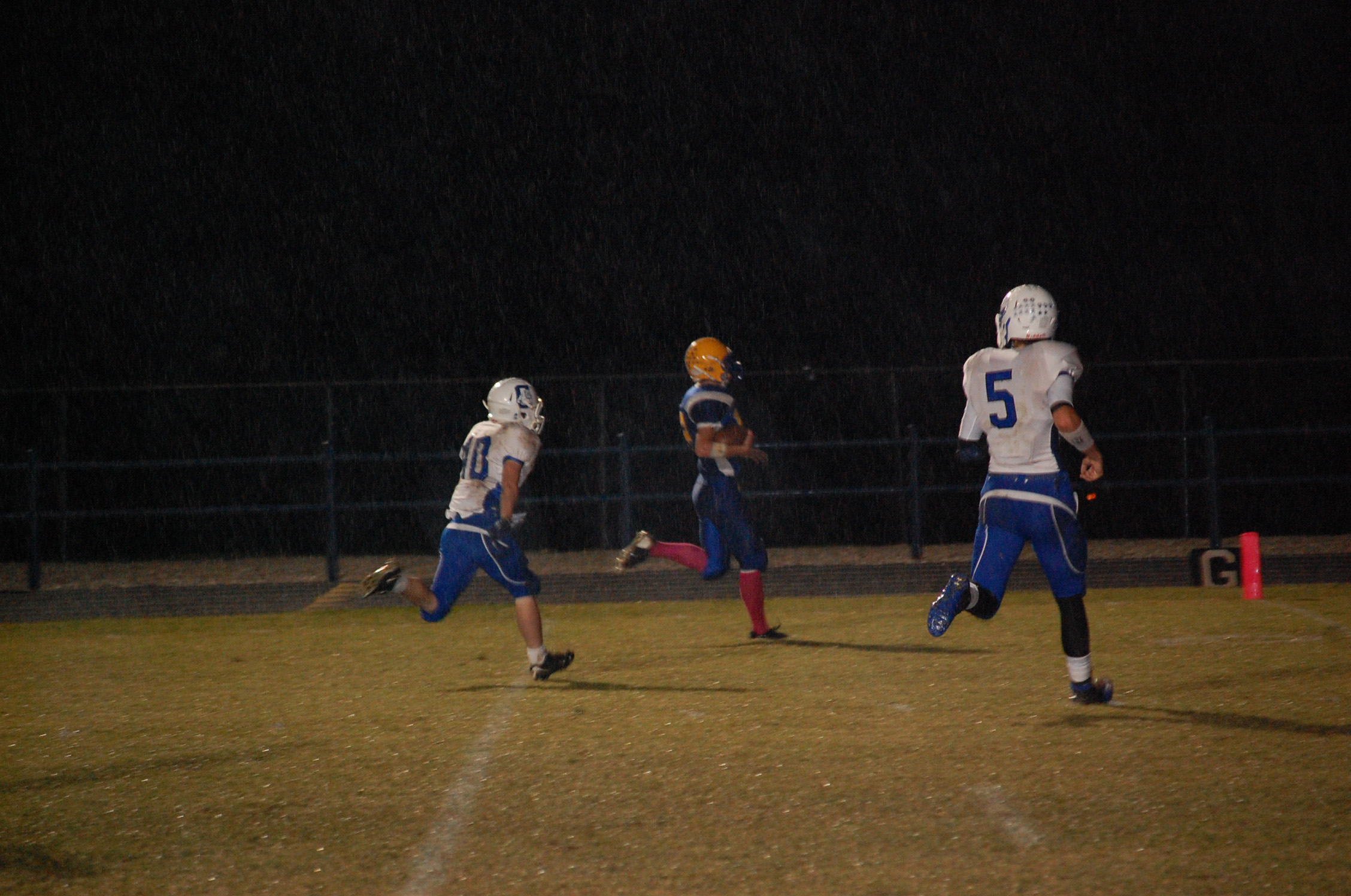 Kane Thompson ran for what appeared to be a 19-yard touchdown Friday night, but the play was brought back for a holding penalty. Ava would score a few minutes later, and went on to beat Cabool 48-6.

Rain began falling last Friday night as seniors and their parents walked onto the field for Senior Night introductions that would precede the Ava-Cabool football game, and the rainfall would continue throughout the contest.
Cabool took the opening kickoff and with no hesitation marched 72 yards to take a 6-0 lead with 6:49 left in the first quarter.
Coach Dan Swofford had predicted that Cabool is a better team than their winless record indicates, and the open drive by the Bulldogs gave further indication that he might be correct.
Ava’s first drive ended with an interception at the Cabool 15-yard line, and when Cabool got the ball back, the Bulldogs would threaten again, but a penalty flag on a faked punt pass would stymie that potential scoring drive.
The Bears would get the ball in excellent field position following a short Cabool punt, and with 1:56 left in the first quarter, Kane Thompson would go 19 yards for an apparent Ava score. However, a holding call against the Bears erased that score.
Finally, after a nice 21-yard gain by Brett Vinson, Chase Willis would punch it in for Ava from the 1-yard line, and Vinson’s kick gave the Bears a 7-6 lead at the end of the first quarter.
From that point it was all Ava, as Willis would add touchdown runs of 73, 12 and 40 yards, and the Bears took the SCA contest 48-6.
Willis, who carried 17 times for 208 yards, would also run for a 2-point conversion.
Vinson carried seven times for 174 yards and had touchdown runs of 56 and 31 yards, ran for a 2-point conversion and kicked two extra points.
Nate Bray also had a touchdown run for the Bears late in the game.
The Bears had total offense of 501 yards, all rushing.
Coach Swofford was especially proud of the defensive effort by his Bears on Friday night.
Bray had 10 tackles, including three for a loss, and Buster Davis had 10 tackles, one for a loss.
Larry Walker had seven tackles and one sack, and Jesse Dean had a fine defensive night with five tackles and one for a loss.
The Bears will wrap up the SCA schedule this Friday night with a trip to Willow Springs to play a very good 5-3 team.
Willow is a senior dominated squad with a good quarterback and good people to back him up. It will be Senior Night for the Willow Springs Bears, and Coach Swofford is, once again, concerned that the Willow Bears will be riding high on that emotion.
There’s a lot riding on this battle of the Bears Friday night.
Ava moved up a notch to second place in district rankings this week. If the Bears can stay in the top half of the bracket, they will host the first-round district game which will be played on Halloween night next Thursday.
If rankings should remain as they are now, Ava would play host to Buffalo in the first round of Class 3, District 3 play.
The Bears could also end up playing Rogersville or Salem for a second time, depending on this week’s results.
Ava scored three times in the second quarter Friday night to take a 29-6 halftime lead.
Willis scored on runs of 73 and 56 yards at the 8:32 mark and again with 11 seconds remaining in the quarter. Willis also ran for the 2-point conversion following his second touchdown of the period.
Vinson scored on a 56-yard run at 4:50 in the second quarter and also ran for the 2-point conversion.
Vinson put the Bears on top 36-6 at 4:12 in the third period with a 31-yard touchdown run and the kick for the point after.
With 37 seconds left in the quarter, Willis broke loose for a 40-yard run to put the Bears up 42-6.
The fourth quarter expired pretty rapidly with the clock running under the mercy rule. However, the junior varsity players took advantage of the opportunity to get their uniforms dirty, too, and after a strong running attack by Morgan Smith, Nate Bray scampered into the end zone for a 16-yard touchdown run with 2:07 left on the clock.
Eight Ava football seniors and six cheerleaders were recognized in the pre-game ceremony; and four senior band members were introduced at halftime although the band did not perform in the rain.
Senior football members are Chance Boyd, Aaron Box, Clayton Clouse, Jesse Dean, Austin Giorgianni, Brett Vinson, Larry Walker and Chase Willis.
Senior cheerleaders are MiKaela Bristol, Halle Eggleston, Amber Henderson, Emory Parham, Devin Stewart and Kayla Tanner.
Despite the drenching rain, Ava band members continued the tradition of stepping out of their marching shoes and leaving them on the field as they were introduced, symbolic that although they are moving past their high school career they will always be a part of this band and, therefore, will “never walk alone.”
Senior band members are Emily Armour, Elizabeth Ferguson, Christian Follin and Matt Freeman.