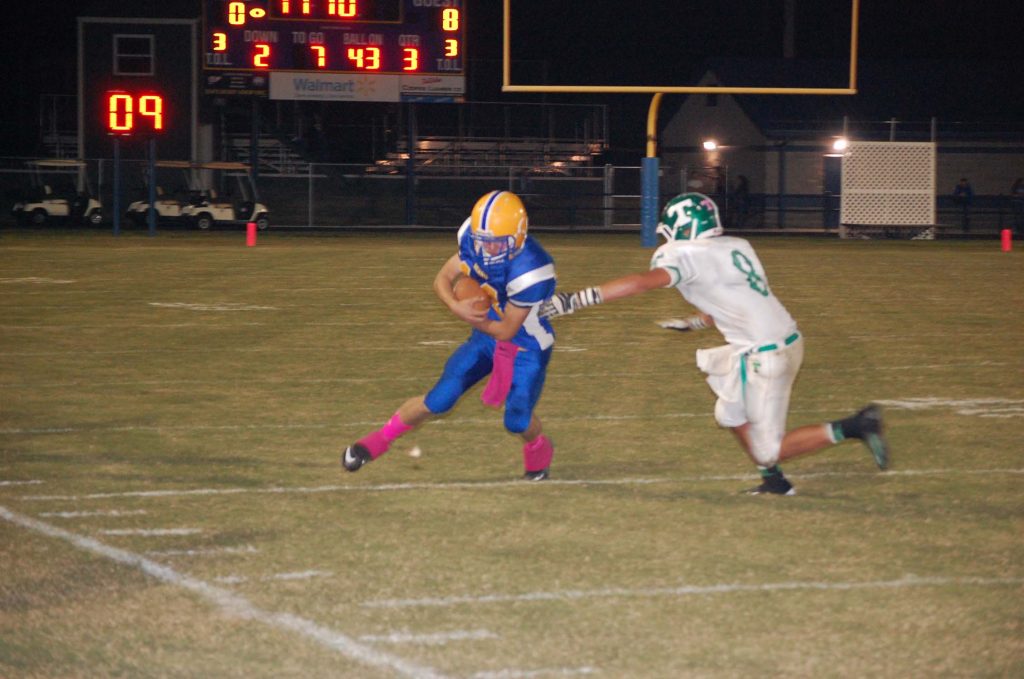 Caleb McFarlin gains yardage after catching a pass from Cody Huff in the fourth quarter of Friday night's game with Thayer. 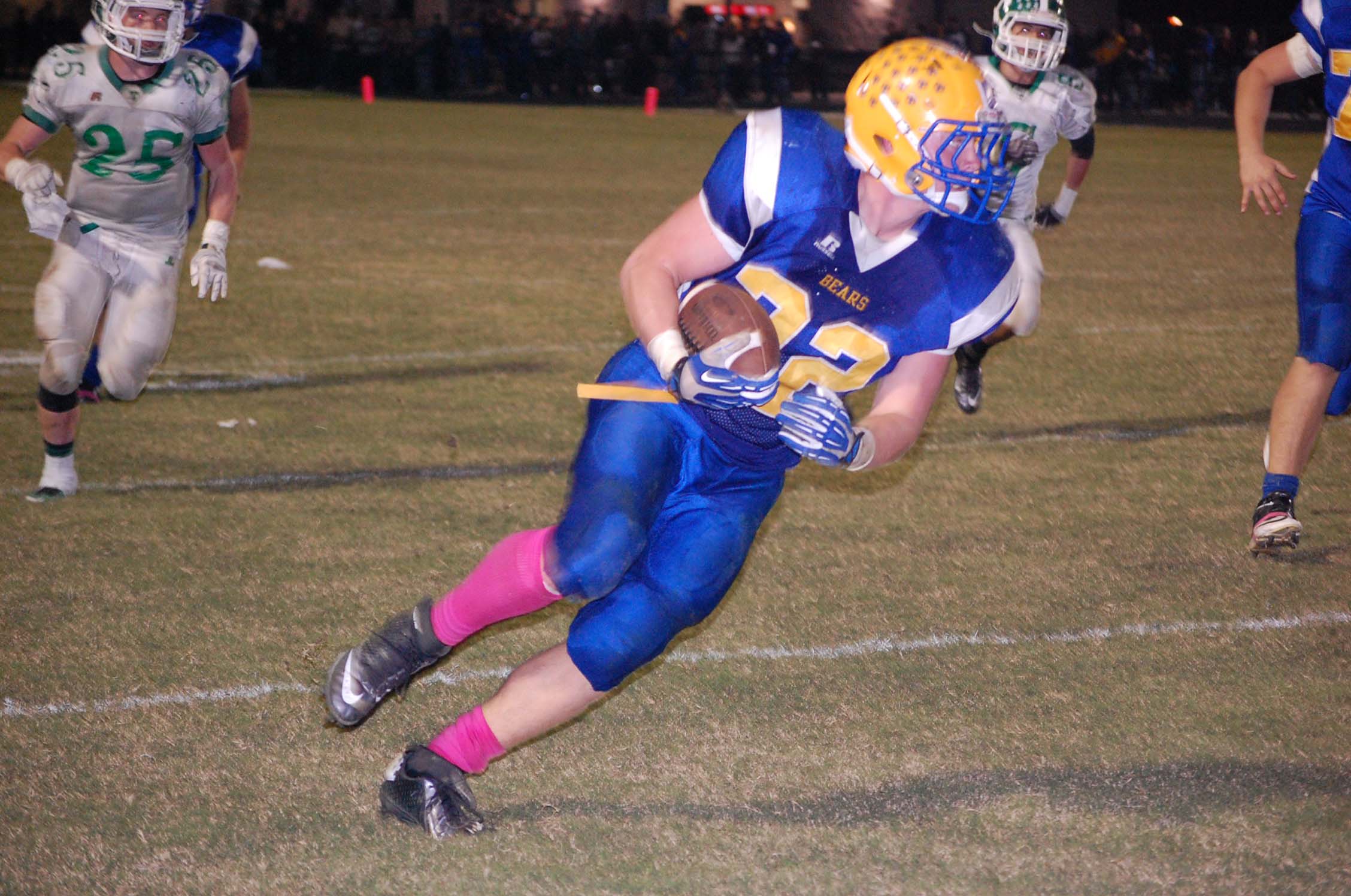 Chase Willis picks up an Ava first down at the Thayer 21-yard line on a pass from quarterback Cody Huff to keep an Ava drive going in the second quarter last Friday night.

Thayer scored a touchdown with 8 seconds left to play in the first quarter here last Friday night, and when the 2-point conversion run made the score 8-0 that would be all the scoring the game would see. But there was a lot more football to be played.
The Bears tallied 321 total yards of offense but could not get the ball into the end zone.  At the same time, the Ava defense held a good Thayer team to just one touchdown on the night.
Thayer’s score came on a 42-yard run by senior Mitch Weber who switched off at the quarterback position with sophomore Ayden Henry.  When he wasn’t behind center, Weber was set up at the runningback position in the Bobcat offense.
Midway into the second quarter, Weber shot through the middle of the line and ran 73 yards for what appeared to be another Thayer touchdown, but that one was brought back for a holding penalty.
Ava had 250 yards rushing and 71 yards through the air Friday night. The Bears’ leading rusher was senior Chase Willis, with 77 yards.
Defensively, Nate Bray had 14 tackles, two for losses; and Buster Davis had 12 tackles.
The Bears will host Cabool this Friday night in the final home game of the regular season and Senior Night. Ava’s senior players will be recognized prior to the game, with pre-game ceremonies beginning at about 6:30.
Although the Bulldogs are winless on the year, Coach Dan Swofford is not taking anything for granted. In fact, he says this Cabool team scares him because they have been scoring points throughout the season, despite their losing record. And, Swofford adds, receiver Broderick Davis is “as dangerous as anyone in the conference.”
While this week’s game is the last scheduled game at home this season, there is a good chance the Bears could play at home on Halloween night in Week 10. The Bears are currently ranked third in the district, and if they can stay on the top half of the bracket they will host the district game which will be played on Thursday, Oct. 31. If the current rankings hold, the Bears would play Rogersville again, a team they defeated 40-3 the second week of the season. 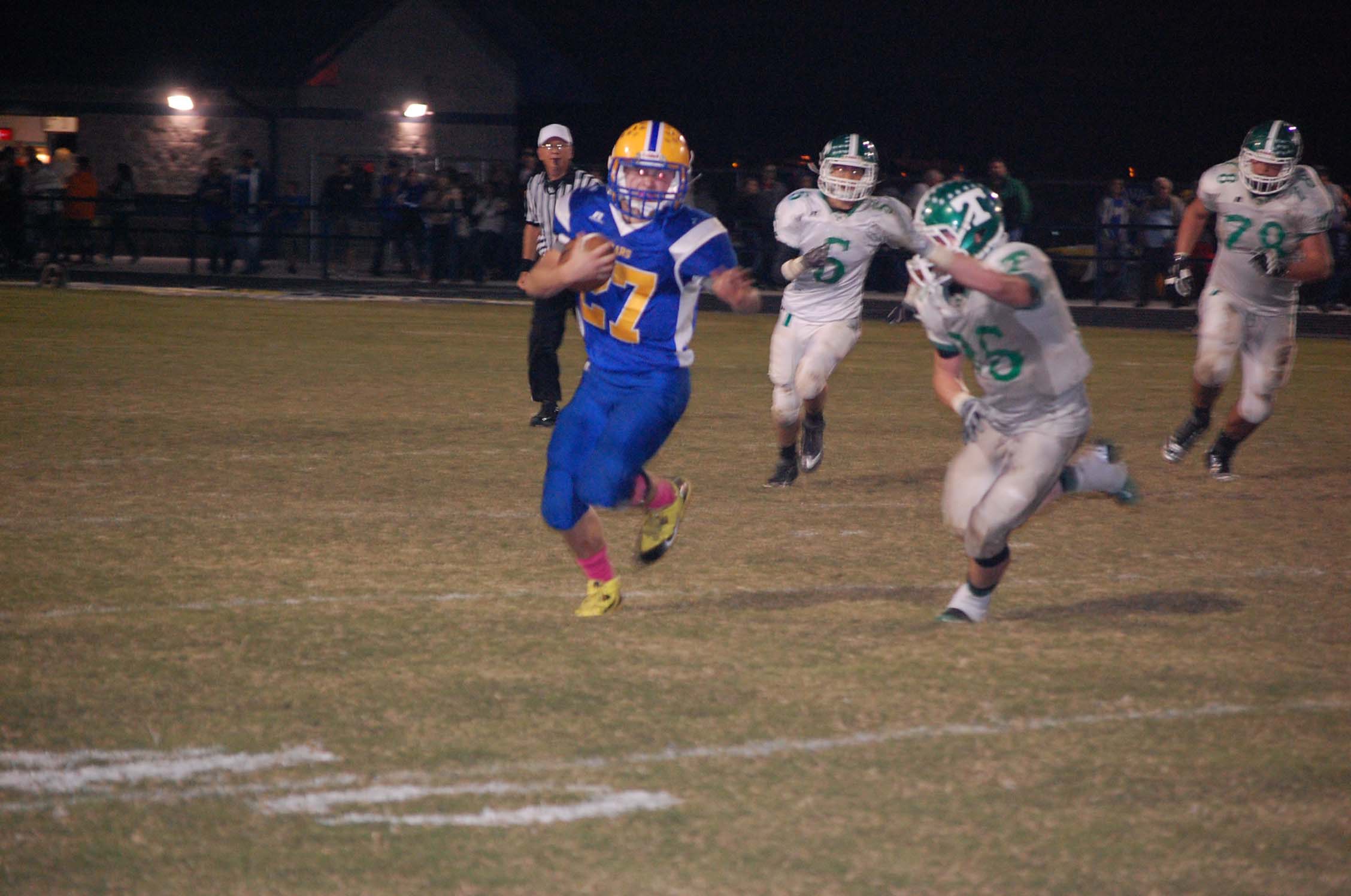 Brett Vinson takes the ball to the Thayer 26-yard line for a first down late in the game. A Thayer interception would end that drive for Ava, however.

Next week the Bears will wrap up the conference schedule and the regular season at Willow Springs. After losing Colton Akers with a broken collarbone at the Houston game, the Bears will play the remainder of the season without senior Chance Boyd who suffered a concussion in Friday’s game.
Last Friday night was Homecoming at Ava’s Harlan Stadium and during halftime coronation ceremonies, seniors Kayte Aid and Matt Freeman were crowned 2013 Homecoming royalty. Runners-up were queen candidates Darian Bushong and Erica Croney, and king candidates Buster Davis and Jesse Dean.
Both Ava and Thayer moved the ball Friday night, but both teams played most of the game on their own end of the field.
With the exception of the long touchdown run from near midfield, Thayer never got closer to the Ava goal than the 36-yard line. The Bobcats reached the Ava 37 one time in the first quarter and the 36 in the second quarter.
The Bears, on the other hand, reached the Thayer 16 and 18 yard lines on consecutive drives in the second quarter, and had another scoring threat disrupted in the fourth quarter when Thayer’s Jacob Foley intercepted an Ava pass at the 5-yard line.
That drive began at the Ava 12-yard line where a Thayer punt rolled out of bounds with 3:47 left in the game. Ava picked up first downs at the 22 and the 43 of Ava, then crossed midfield and senior Brett Vinson converted another Ava first down at the Thayer 26-yard line with 1:10 left. But that is where the Ava drive would end when Foley stepped in front of a Cody Huff pass and returned it all the way to midfield with under a minute left on the clock.
The Ava defense come through once more and forced Thayer to punt, but the ball would go all the way to the 8-yard line before it was downed with 20 seconds left. Huff passed to Kane Thompson for a first down at the 30, and completed another to Thompson at the midfield stripe as time expired.