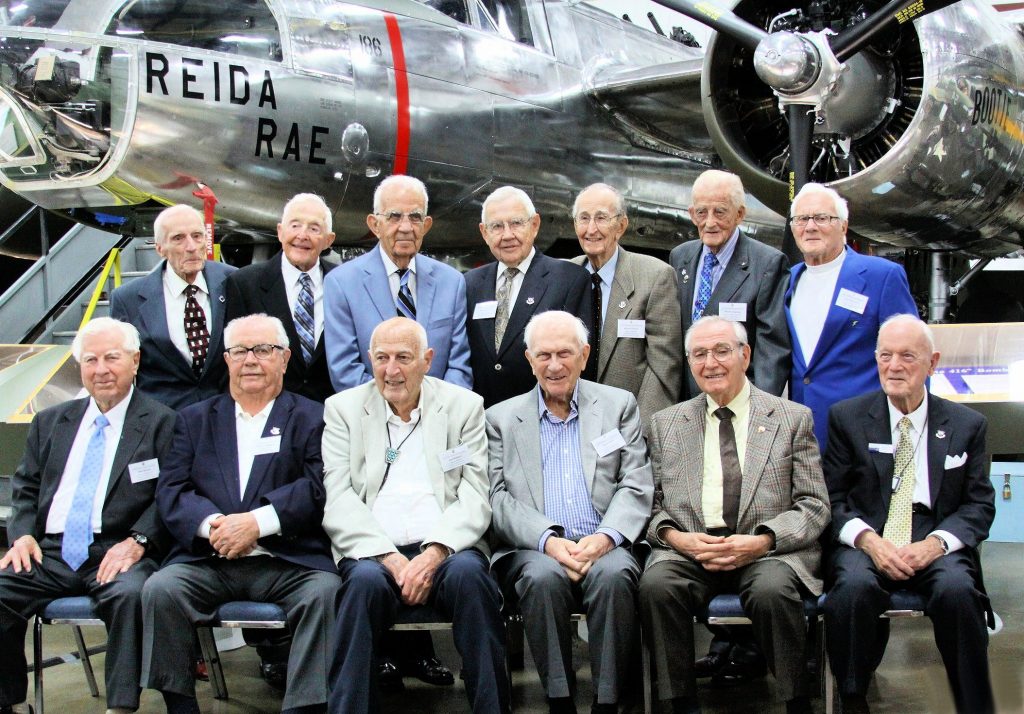 World War II veterans from the 416th Bomb Group will be meeting this week in Gainesville for their annual reunion, hosted by Wayne and Doris Sayles in their building, the former Gainesville City Hall, which has been transformed into the 416th archives. Veterans who attended the 2012 reunion, held in Connecticut, were front row from left, Billy Brewer, Joe Meagher, Carl Weinert, Jim Keefe, Vinnie Fair and Dave Andrews. Back row: Dan Eastman, Jack Sittarich, Ralph Conte, Bob Basnett, Roland Dullnig, Wayne Downing and Gus Ebenstein. Community residents are invited to meet the veterans during a coffee to be held from 10 a.m. to noon Thursday at the Ozark County Historium. (Photo courtesy Wayne Sayles)

By Sue Ann Jones
A World War II combat unit – at least what’s left of it after 70 years – made its way to Ozark County Wednesday from all around the country, a band of brothers and their families gathering yet again to honor a kinship forged in battle.
Eight surviving veterans from the Army Air Corps’ 416th Bomb Group, plus about 40 relatives, are expected to attend the squadron’s annual reunion, hosted this year in Gainesville by Wayne and Doris Sayles at their facility at Fourth Street and Harlin Drive, the former Gainesville City Hall. Memorial plaques and other commemorative items have been installed there to transform the building into a “416th archive,” Wayne Sayles said last week. In addition to viewing the memorabilia displayed at the archive, “the veterans and their families will be able to bring in computers and get onto the 416th Bomb Group website and do other research,” Sayles said.
Most of the guests will be staying through Sunday at Theodosia Marina Resort, where a hospitality room has been set up for them.
Area residents are invited to meet the veterans and their family members at a reception to be held at the Ozark County Historium from 10 a.m. to noon Thursday. “The veterans will be there, along with their family members, and also the children and spouses of veterans who have passed away,” Sayles said. “We hope the community will stop by to say hello. You won’t have any trouble spotting who’s a veteran. They’re all in their 90s now.”
In fact, said Sayles, one 97-year-old member of the 416th from Arkansas is among the group.  Two others who had been planning to come to this week’s reunion died recently. “They have been getting together since about 1946 or so. At first there were about 2,500 members of the 416th, and each squadron had its own reunion. But as time passed and members of the group passed away, they consolidated into the wing.”
Other events include an internet workshop Thursday afternoon at the archives building, informal social gatherings Friday, a banquet Saturday night and videotaping sessions on Sunday. “The veterans don’t do a lot out in the community during their reunions because they’re so anxious to spend time with each other,” said Sayles.
A West Point class ring
He and Doris became acquainted with the 416th in 2006 when a friend sent Wayne a West Point class ring he’d found in a California pawn shop and asked if he wanted to buy it. At first Wayne had no interest in owning the ring, but then he reconsidered.
“The first big question was why would anyone sell a West Point ring? It’s very rare to find one. Families hold on to them, and there’s a West Point organization that, whenever a ring is found floating around, they buy it and get it returned to the family,” he said.
Although he planned to send the ring back to his friend and decline to purchase it, he found himself unable to do so. In a story published in the Nov. 26, 2008, edition of the Times, he said, “Every time I went to package the ring up, I couldn’t put it in the box. It was like it wouldn’t let me.”
The experience became a “metaphysical story, very spiritual, and I’m not by nature a spiritual person,” he said. Sayles wrote about the experience in a book, First to Fall, which he self-published in 2008.
“The book is now being re-written because so much has happened since then,” he said. “I’ve found a ton of new information.”
Sayles’ research revealed that the ring had belonged to William Edward Cramsie, who graduated from West Point in June 1943 and headed off to war with 15 other members of his class who were assigned to the 416th Bomb Group, part of the Ninth Air Force.
“The 416th flew out of England until D-Day and then moved into France and supported the push eastward and the move into Germany,” Sayles said. “They supported the Battle of the Bulge and the Rhineland campaign.”
Tragically, Cramsie was killed on his fourth mission.
“He went down in Bradwell Bay,” Sayles said. “He had asked his girlfriend to keep his West Point ring, but she said no. Apparently his ring stayed with his mother until after his death and then passed to his brother, who put it away and never showed it to anyone, not even to his two kids who are involved in aviation. They were dumbfounded when I tracked them down and showed up with the ring. They didn’t know anything about it. The family had just been too choked up to talk about it.”
Adopted by the 416th
Sayles’ research into the ring’s history led him to connect with the Cramsie family and become close friends with William Cramsie’s nephew, Tom Rickels, who recently visited the Archive. It has also resulted in Wayne and Doris Sayles being “adopted” as members of the 416th family. They have attended reunions of the 416th Bomb Group since learning about the ring’s history. They hosted the 2009 and 2010 reunions of the group in Branson and attended the 2011 and 2012 reunions in Connecticut. This year’s reunion, based in their building in Gainesville, will be the first event held there since the couple acquired the property. They plan to hold other events in the future.
Sayles, 70, retired in 1982 as a captain after serving 21 years in the Air Force. He and his wife are longtime Ozark County residents. Doris Sayles owns the House of Angels and Christmas Corner shops in Gainesville.