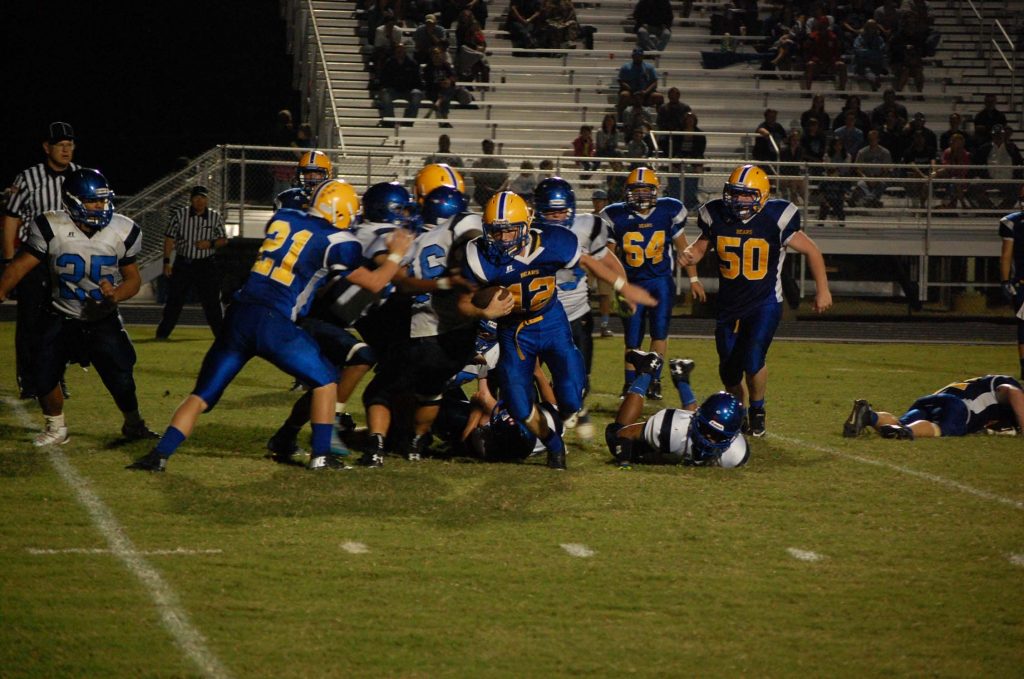 Ava's Kane Thompson breaks out of the pack for a 3-yard touchdown run in the fourth quarter Friday night against Salem. With Brett Vinson's kick, this score sealed the final score at 44-7 in favor of the Bears. 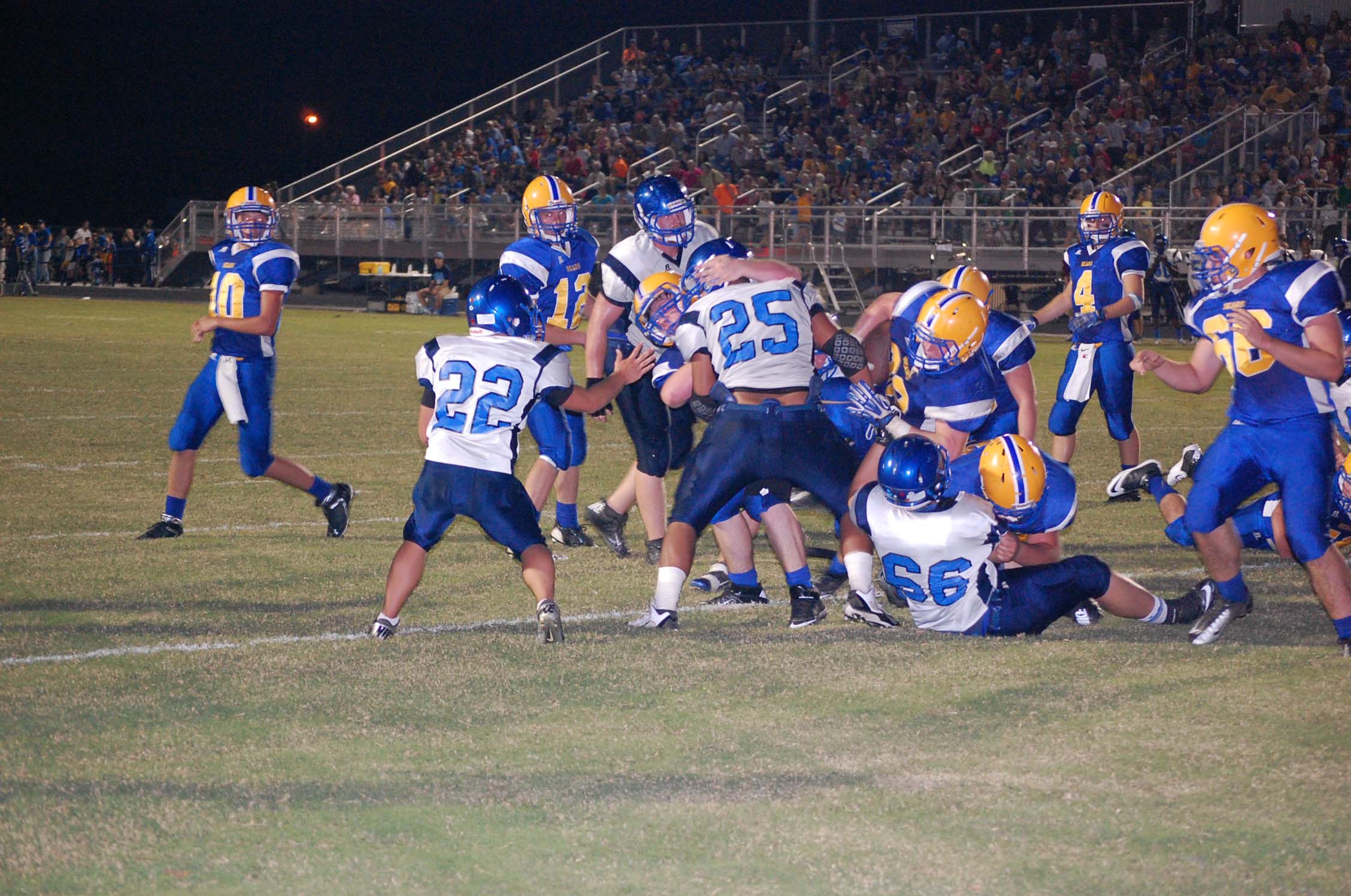 Chase Willis goes up the middle for one of his three touchdowns last Friday night in Ava’s 44-7 SCA win over Salem.

Coming off a crushing 47-13 SCA loss to the Liberty Eagles at Mtn. View a week earlier, no one was sure how the Ava Bears would perform on Sept. 27 going up against the tough Salem Tigers.
The Bears settled that question early, however, on Friday night, scoring three touchdowns in the second quarter and taking a 28-7 halftime lead.
Junior Kane Thompson had an outstanding night offensively, rushing for 162 yards on 14 carries and scoring Ava’s first touchdown on a 19-yard run in the first quarter.
Senior Chase Willis ran for three touchdowns, quarterback Cody Huff ran for one TD and passed to Colton Akers for another, and the Ava defense scored a safety in the game.
In addition to his solid defensive play, Brett Vinson also kicked 6-of-6 extra points for the Bears.
This week the Bears will travel to Houston to face the Tigers which are 1-4 overall and 1-2 in conference.
The Bears are 2-3 overall and 1-2 in the SCA after the win over Salem.
Ava received the opening kickoff but fumbled to Salem at the Bears’ 34-yard line. Salem picked up a first down at the 17, but Chase Willis sacked Salem quarterback Dylan Wisdom for a loss. On fourth down, the Ava defense held and the Bears took over on downs at their own 20-yard line.
The Bears marched 54 yards, picking up four first downs along the way, but also failed to convert on a fourth down play and turned the ball back over to the Tigers at the 20-yard line.
Salem fumbled the ball back to Ava at the 19-yard line with 1:23 left on the first quarter clock, and on the next play Thompson went 19 yards for the score at 1:16 in the first period. Vinson’s kick put the Bears on top 7-0.
Willis scored the first of his two second-quarter TDs on a 1-yard run at 7:42 and the kick put the Bears up 14-0, concluding an 86-yard drive for the home team.
Wisdom used a pass to Triston Dubois to earn a first down at the Ava 35-yard line and set up what would be Salem’s only score of the night. Wisdom would score on a 10-yard run at 6:09, and the kick by Erik Wood trimmed Ava’s lead to 14-7.
Ava’s next drive started at the 20-yard line but the Bears would be forced to punt the ball away. The Salem receiver mishandled the reception, however, and Ava recovered at the Bears’ 46-yard line.
A penalty on the Bears after the fumble recovery backed the Bruins up to a 1st-and-18 situation, but Huff would connect with Colton Akers for a 54-yard touchdown pass play at 3:19 in the second period, and the kick increased Ava’s lead to 21-7.
On Salem’s ensuing drive, the Tigers picked up one first down  at the Salem 45-yard line, but Morgan Smith would pick off a Wisdom pass and return the ball to the Tigers’ 10-yard line to set up Willis’ second touchdown of the quarter. That score came with 35 second left in the first half, on a 1-yard plunge up the middle.
The Bears would be unable to capitalize on another Salem turnover early in the third period, and in typical Ava-Salem fashion, each team would be forced to punt the ball away before the Bears would begin what would develop into a 77-yard scoring drive.
Following a nice Salem punt, the Bears would begin the drive on the 23-yard line with 6:35 showing on the third-quarter clock. Akers, Thompson and Huff would each pick up a first down for the Bears, and Akers would gain another for Ava at the Salem 17-yard line.
With 2:32 left in the third, Willis would run 10 yards for his third touchdown of the night, and with Vinson’s kick the Bears’ lead would be 35-7 at the end of the third quarter.
Ava was forced to punt early in the fourth quarter and Salem would down the ball at their own 9-yard line. Wisdom dropped back into the end zone on a potential pass play and was sacked behind the goal line by Ava’s Nate Bray to increase Ava’s lead to 37-7 at 10:30 in the fourth quarter.
Salem would kick from the 20 and Akers returned the ball to the Ava 30 where the next drive would begin.
Another nice run by Thompson gave Ava a first down at the Salem 43, and a 15-yard run by Willis gave the Bears another first down at the Salem 39. Akers picked up a first down at the 24, and Thompson gave the Bears a first-and-goal at the 3-yard line. Huff would then score Ava’s final touchdown of the night with 5:37 left in the game.
Freshman Zak Eplin took the snaps from center on Salem’s next possession, and when the Bears took over again, Ava freshman quarterback Eli Maggard was under center to run out the clock.
On Oct. 11 the Thayer Bobcats will come to Silvey Field for Ava’s 2013 Homecoming contest. The following week, on Oct. 18, Cabool will be here for Senior Night.
Coach Dan Swofford said Larry Walker had an outstanding night for the Bears defensively, recording 12 tackles, including two for losses, and forcing one Salem fumble.
Quarterback Huff ran for 51 yards on 15 carries and completed 4-of-6 passes for 78 yards.
Ava had 315 yards rushing and 78 yards passing for total offense of 393 yards.
Taking into consideration all the loss yardage and penalties, Salem had 33 yards net offense Friday night, Swofford said.