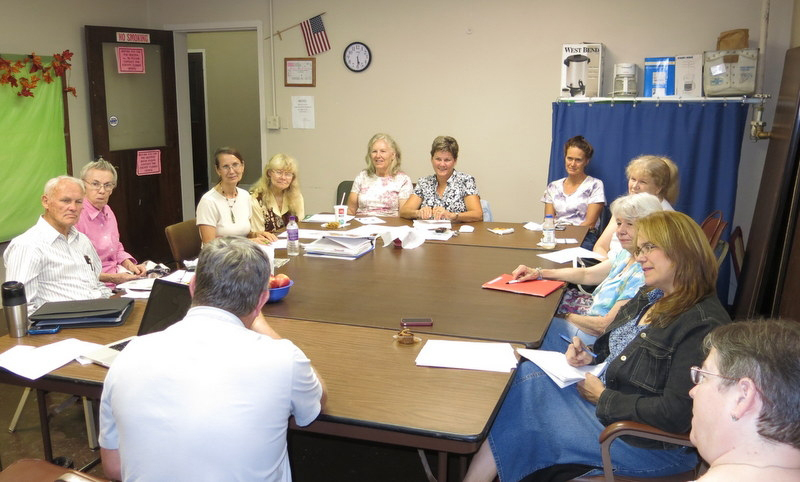 Presiding Commissioner Larry Pueppke (with back to camera) speaks to the Republican Women's group on Sept. 17.

The Douglas County Republican Women’s Club met on Sept. 17 in the courthouse.
After prayer and the Pledge of Allegiance, Sarah Greek, the club’s president, introduced the guest speaker, Douglas County Presiding Commissioner Larry Pueppke.
Pueppke and two other commissioners, Craig Cunningham and Leon Potter, meet together each week on Mondays and Thursdays from 9 a.m. to 12 noon. They handle roads, maintenance, and insurance issues for their equipment, property rights issues, and work with the clerk and the collector on the county budget.
They also have a Road & Bridge budget that is partially funded by the state and federal government.
The commissioners occasionally work with MoDOT on county roads.  The commissioners work closely with many of the elected county officials in the courthouse.
Pueppke reported that there is currently an excellent working relationship with these officials.
There were many questions during his report to the club. Mr. Pueppke also mentioned that the County Recorder has resigned and that the commissioners would be selecting the most qualified person to continue her position until the governor selects someone to fill the position and continue her term of office.
The club also elected to offer a scholarship to a college-bound Douglas County high school senior in the spring of 2014. Applicants will be required to write an essay on the chosen topic(s) and submit it to the club. The winner will read his/her essay at the Lincoln-Reagan Dinner next year. A committee was formed to plan the contest logistics. The contest will be announced before the end of the year.
Several of the club members had attended rallies at the state Capitol in Jefferson City on Sept. 11 during the veto override session. Beth McElvain reported on which legislation was overridden, and which was not.
Sarah Greek presented a youth leadership program called TeenPact. This program trains youth to understand the political process, value their liberty, defend their Christian faith, and engage the culture.  TeenPact is a Biblically-based, four-day government class for 13-19 year olds.  Students learn about government by practicing political procedures, experiencing the environment of the state capitol, and discussing current issues with lobbyists and elected officials.  Students leave the class with a thorough knowledge of how a bill becomes a law, how to pray for legislators, how to influence the political process, and how to be responsible citizens. Sarah invited students to attend the 2014 TeenPact class March 3-6 at the state Capitol.
The next meeting of the Douglas County Republican Women’s Club will be Oct. 15 at 5 p.m. in the basement of the Douglas County Courthouse. All Republicans are welcome.  For more information, please call 683-2280.