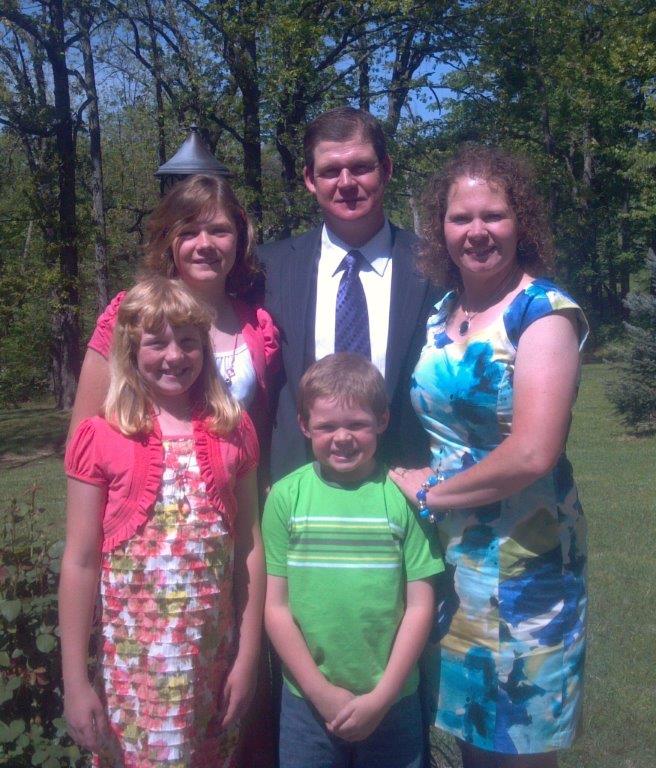 Rhonda Little grew up in Douglas County on a dairy farm, and today, while teaching seventh-grade math at Ava, she is grateful and delighted to live in the farmhouse where she grew up, and to work the same dairy her parents nurtured and cultivated in her childhood.

And, with a laugh, she adds “the farm still has the same rocks, too”

Rhonda and her husband Travis purchased her childhood farm in 2001, the property had been out of the family for ten years.  Today, they continue the tradition of operating and overseeing the dairy, and for the couple, the business offers a legacy of responsibility and commitment, and that is how they want to raise their children.

In their youth, both Rhonda and Travis grew up on a dairy farm, and now as adults, they understand and appreciate the lifestyle, but most of all, they value the work ethic and lessons imparted.

Living in an agricultural area, Ava residents know that dairy farmers are committed to hard work, it is a daily commitment to produce their best product.  The business is a never-ending task, and duties always lie ahead, but that was the level of responsibility they wanted.  It’s also a lifestyle they wish to share with their children.

Rhonda also acknowledges that the dairy provides an element of interest students can embrace as well. In the classroom, cows, calves and their shenanigans provide a safe, common thread of interest, and most kids can identify with agricultural roots.

Rhonda graduated from Ava High School in the Class of 1990, where she earned the title of valedictorian.  She remembers graduation very well, as the event was the first time she had ever given a speech in front of a large group of people, and she was nervous.

Returning to that time in her life, as a shy high school girl, she quickly recalls Mona Decker and speech class, and how Mrs. Decker guided her through the speech presentation.  Today, it’s a pleasant memory.

After graduation, Rhonda entered Drury College in Springfield, where she accepted a four-year scholarship for band and orchestra.

She graduated from Drury in 1994 with a Bachelor of Arts in Math and Secondary Education.  Her first teaching position was in Clinton, Mo., where she taught one year before accepting a job in Clever.

During her career in Clever, several high school students decided they wanted to introduce Rhonda to their cousin.  They were quite persistent in their efforts, but each and every time the matter was mentioned, Rhonda would politely say no and change the subject, as any teacher would.

However, one autumn school day, as Rhonda was preparing to leave with a group of FFA students traveling to the American Royal Livestock show in Kansas City, Mo., she encountered the man her students had earmarked as a perfect match.  His name was Travis, and as a substitute teacher on that day, he was a chaperone for the Kansas City trip as well.

Maybe it was destiny, or maybe just coincidence, nonetheless, after Rhonda and Travis started dating, her students were quick to remind her, over and over again, that the union was originally their idea.

Rhonda and Travis married in 1997.

As an educator, Rhonda strives to help students enjoy math. She wants kids to be comfortable and confident with the subject, and for that reason, she constantly tells students “speed comes with practice”.

In the classroom, she endeavors to impart useful, effective skills, and if possible, she prefers to use real life applications. And, many times, the dairy farm delivers usable problems, and offers situations that students can not only identify with, but also use.  The farm makes lessons real.

During her student years at Ava middle school, Rhonda had the opportunity to develop a special relationship with eighth-grade math teacher Anna Halford.  As Rhonda’s math teacher, Anna made a positive and lifelong impression.  During one school year, Mrs. Halford gave Rhonda several used math textbooks for personal use, and on occasion, after a math contest at the school, Rhonda would go home with Anna until her parents were through milking for the day.

And, just as their parents grew up working on the farm, it is still the same today, as the kids have chores and raise bottle calves.

At home, Rhonda is presently in the throes of remodeling her kitchen, and it’s a task she fully enjoys.  She likes construction projects.

She also likes reading books and planning family get-togethers. In fact, she recently planned and hosted the family’s 13th reunion.

However, in the mix of hobbies, three kids, a husband and about 200 dairy cows, Rhonda also enjoys reading ancient history, she says it’s an interest that was inspired and fostered during World History class –– the one taught by Mona Decker.

Rhonda is the daughter of Ronnie and Sharon Lee, of Ava.