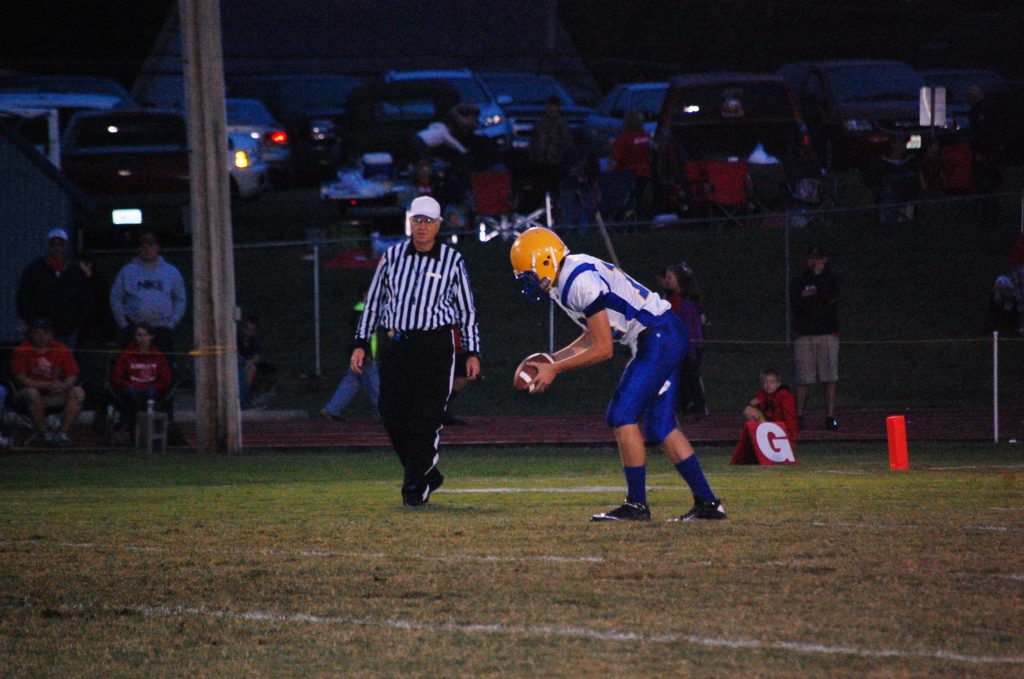 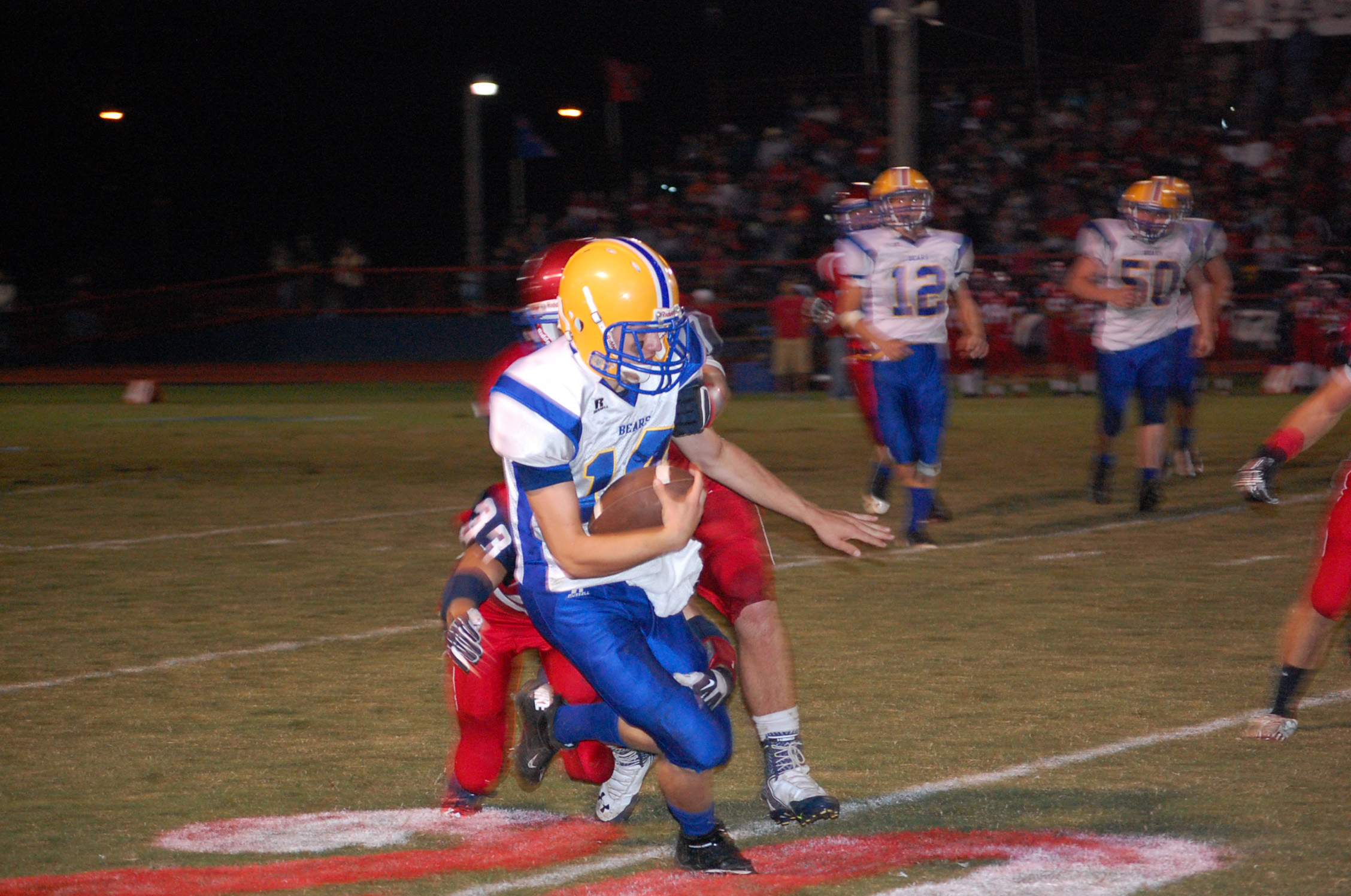 Caleb McFarlin picks up a first down for Ava on the Liberty 16-yard line on a reception from quarterback Cody Huff. The first down set up a 14-yard touchdown run by Kane Thompson.

The Liberty Eagles scored on each of their first four possessions Friday night and held a 26-0 lead less than a minute into the second quarter.

Led by senior quarterback Jaelon Acklin, the Eagles defeated the Ava Bears 47-13, dropping the Bears to 1-3 overall and 1-1 in conference play.

The Eagles scored three touchdowns in the first quarter to lead 20-0, including a blocked punt that was returned for a TD.

After being completely shut down in the first quarter, the Bears finally generated a nice, sustained drive in the second quarter, going 64 yards to score on a 14-yard run by junior Kane Thompson with 4:53 left on the second-quarter clock. The extra point was good, and Liberty’s lead was trimmed to 26-7.

Ava’s scoring drive would include four first downs and ran more than 6 minutes off the clock. Liberty would score again before the half ended, to lead 34-7 at halftime.

Liberty scored twice more in the third quarter to take a 47-7 lead. 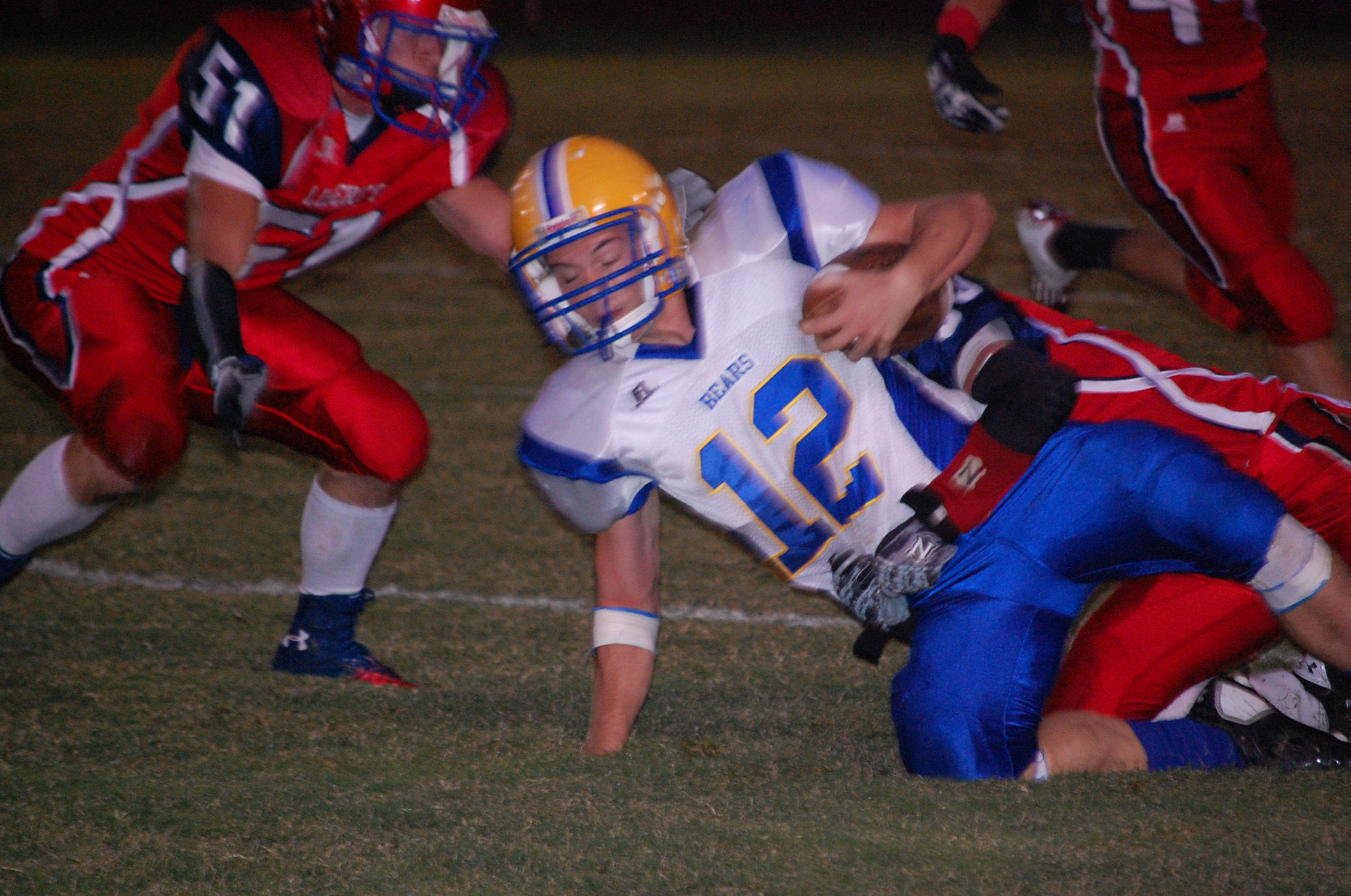 Kane Thompson is tackled short of the first down at the 44-yard line of the Bears in first quarter action at Mtn. View-Liberty Friday night.

In the fourth quarter, with lots of clean uniforms in the game, Ava’s Nate Bray picked up a Liberty fumble and returned it about 15 yards for the Bears’ second touchdown of the game. Ava’s 2-point conversion attempt failed and 47-13 would be the final score.

Ava received the opening kickoff but had to punt the ball away on fourth down. Liberty wasted no time in going 63 yards to score on an Acklin-to-Austin Smotherman touchdown pass play that covered 35 yards. James Denton’s kick failed and at 8:01 in the first quarter, Liberty had a 6-0 lead.

Ava’s next possession was much like the first, but Liberty’s Cody Smith blocked the Ava punt and took it in for the score. Again the kick failed and Liberty’s lead was 12-0 with 5:50 still left in the first quarter.

Kane Thompson returned the ensuing kickoff to the Ava 35-yard line, but once again it was 3-and-out for the Bears, and after receiving the punt, Acklin would pass to Denton for a 66-yard scoring play. Acklin passed to Denton for the 2-point conversion to put the Eagles up 20-0 with more than 2½ minutes left in the opening quarter.

Ava would pick up its first 1st-and-10 of the game on the next drive, on a pass from quarterback Cody Huff to Colton Akers at midfield. Ava’s drive was cut short, however, when Keith Howell intercepted a pass to set up yet another score for the Eagles that would come early in the second period. The Liberty score came on a 13-yard pass from Acklin to Bryan Porter with 11:08 on the second quarter clock, and put the Eagles up 26-0.

Ava’s sustained drive and Thompson’s TD followed, but Liberty would score again on a 31-yard touchdown play, and the 2-point conversion gave the home team a 34-7 halftime lead.

Bray’s fumble recovery for a touchdown came with 5:36 left in the game, and set the final score at 47-13. 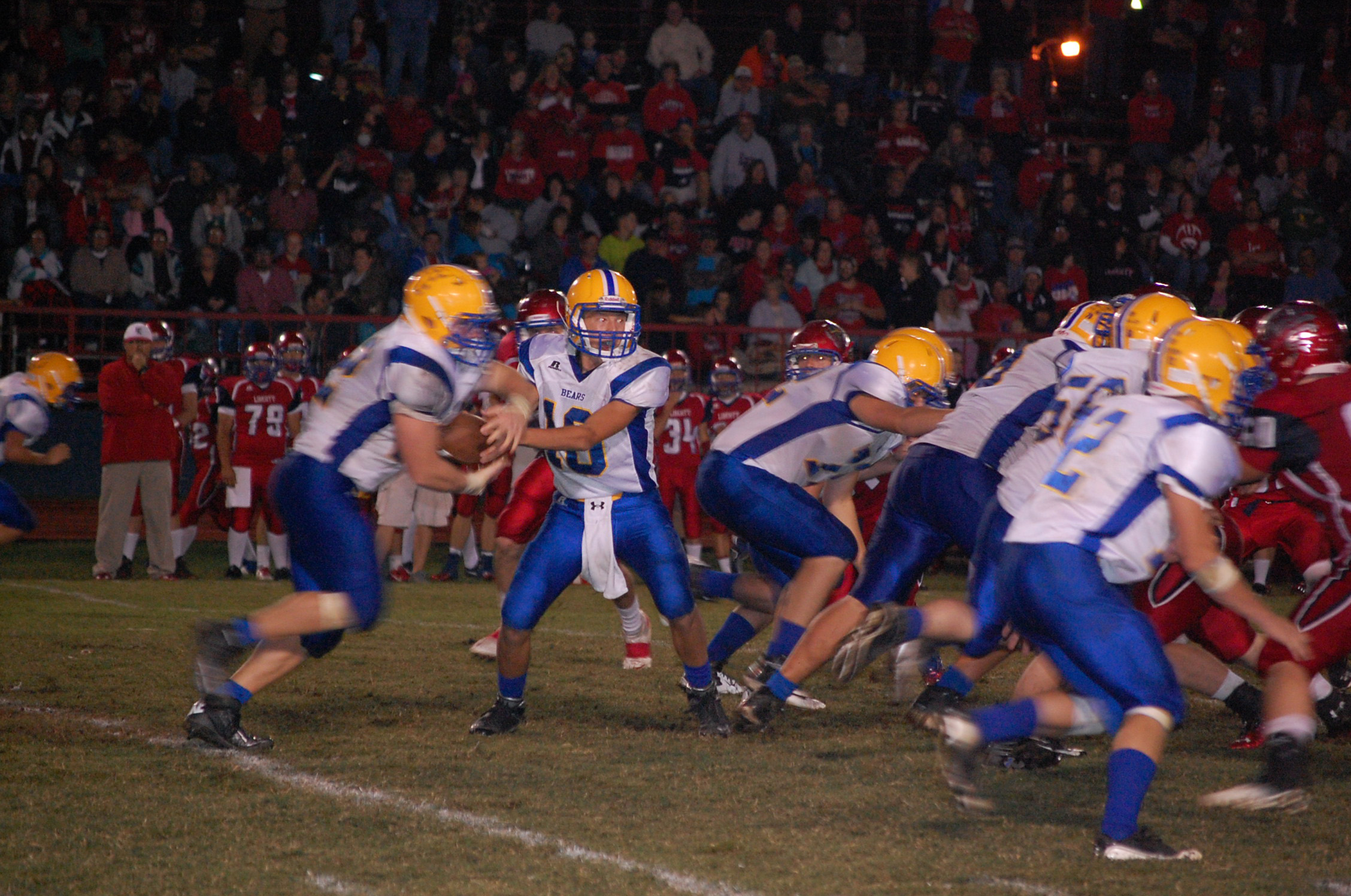 After that score sophomore Caleb McFarlin took over at quarterback for the Bears and freshman Brandon Johnson became the primary ball carrier.

When Liberty got the ball back with less than half a minute on the clock, they took a knee and waited for time to expire.

Defensively, Brett Vinson had 11 tackles, three of those for loss yardage. Vinson also had one sack and a forced fumble.

After playing three of four games on the road, the Bears are back home this week, hosting the Salem Tigers in a conference match-up. Salem comes in at 3-1 after losing last week to Thayer, 23-6.

Coach Dan Swofford said the Bears will have to find a way to stop the Tigers’ running game, led by junior Zayne Kyser who had 221 yards and 16 points against Owensville two weeks ago. He had 170 yards last week against Thayer, although he did not score. The Tigers managed only six points last week against Class 1 Thayer, but had 368 yards of offense, according to The Salem News.

Under first-year head coach Brian McNamee, the Tigers are directed on the field by sophomore quarterback Dylan Wisdom. Since 2006 McNamee has been an assistant coach under coach Bill Schuchardt who led the Tigers for 32 years.

Kyser scored two touchdowns against the Bears last year as a sophomore to lead the Tigers to a 23-20 SCA win at Salem.

Prior to the football game here Friday night, the Ava High School FBLA chapter will host the annual Donna Loftin-Cox Memorial Walk from 5:30 to 6:30. Proceeds from the walk that honors a former business teacher at Ava who lost her battle with cancer, funds an annual scholarship for an Ava senior.