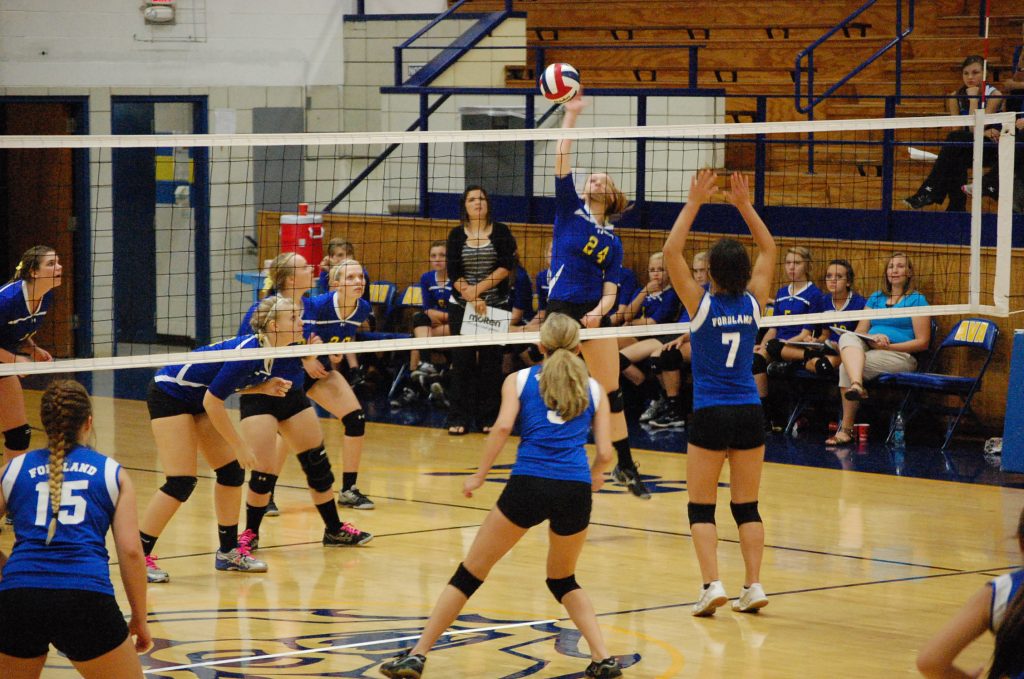 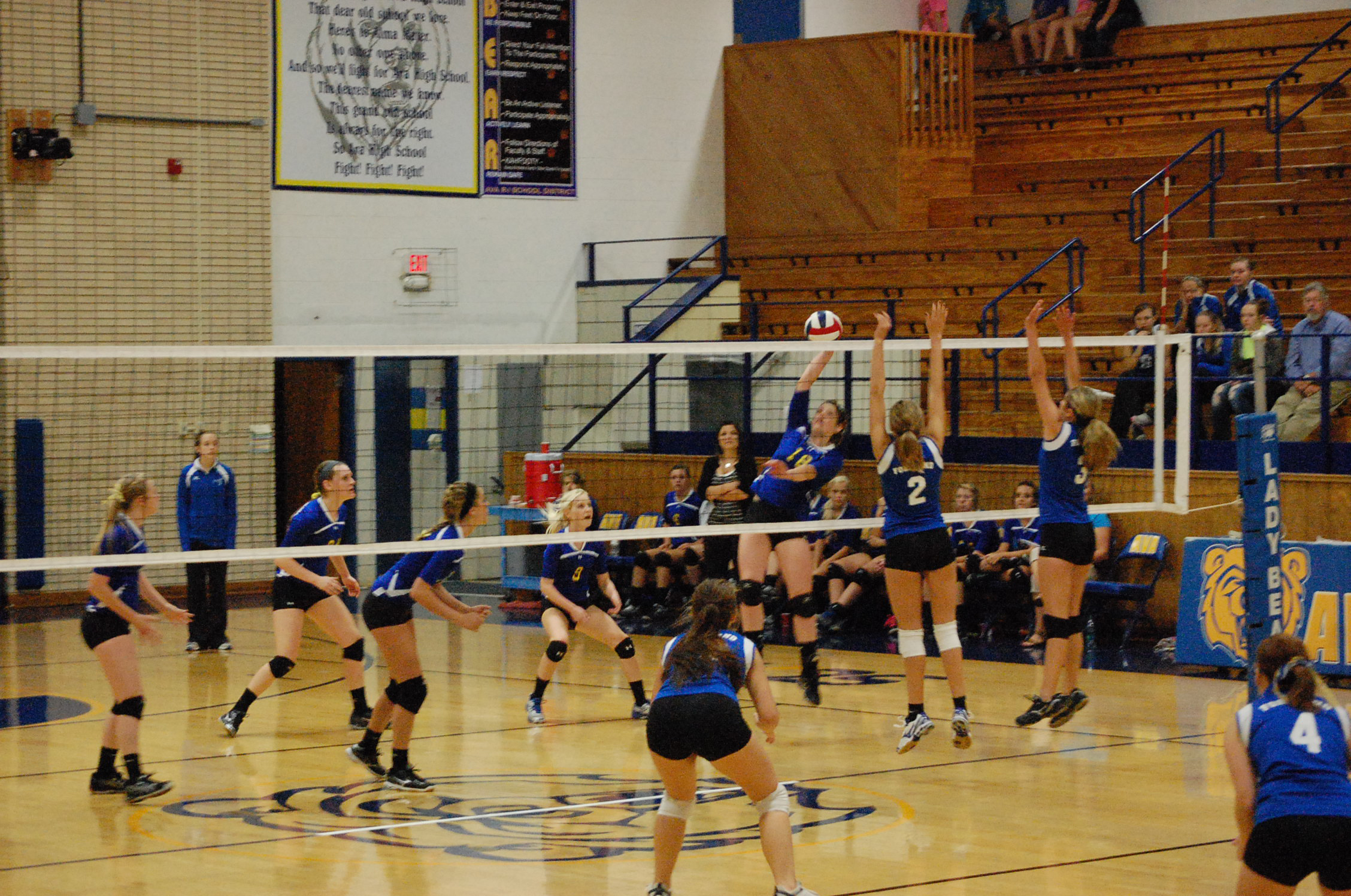 Alena Stokes hits the ball over the net in volleyball action against Fordland Monday night.

The Lady Bear volleyball team took on the Spokane Owls last Thursday. The games were played in the middle school gym because of maintenance work in the high school.

The Lady Bears were led in ace serves by Kira Collett who had three aces; Shelby Bushong added two as well.  Both Hunter Shelton and Dusty Graham added an ace apiece for the team.

Cera Longino led the team in assists with three.  The JV Lady Bears also had a very strong offense against the Lady Owls, with Bushong and Bree Gidney each adding two kills and Graham, Shelton, and Longino all adding one kill apiece.

The varsity Lady Bears lost in two sets with scores of 13-25 and 16-25.  The Lady Bears struggled to get their offense going against a hard hitting Spokane team.  The Lady Bears also missed four serves during the match which didn’t help.

Darian Bushong had the only ace serve of the game and she also led the team with two stuff blocks.  Erica Croney also added a stuff block of her own.  Croney led the team in kills with two; Courtney Mings and Bailey Loge added one kill apiece.

“We really struggled to play together as a team, and were really beating ourselves up over not playing good,” said Coach Sarah Roy.  The Lady Bears were 0-3 after the Spokane match, with Fordland coming here Monday night.

The Lady Bears got their first double victory of the season against the Fordland Lady Eagles on Monday night.  The JV team won rather decisively with scores of 25-8 and 25-11. 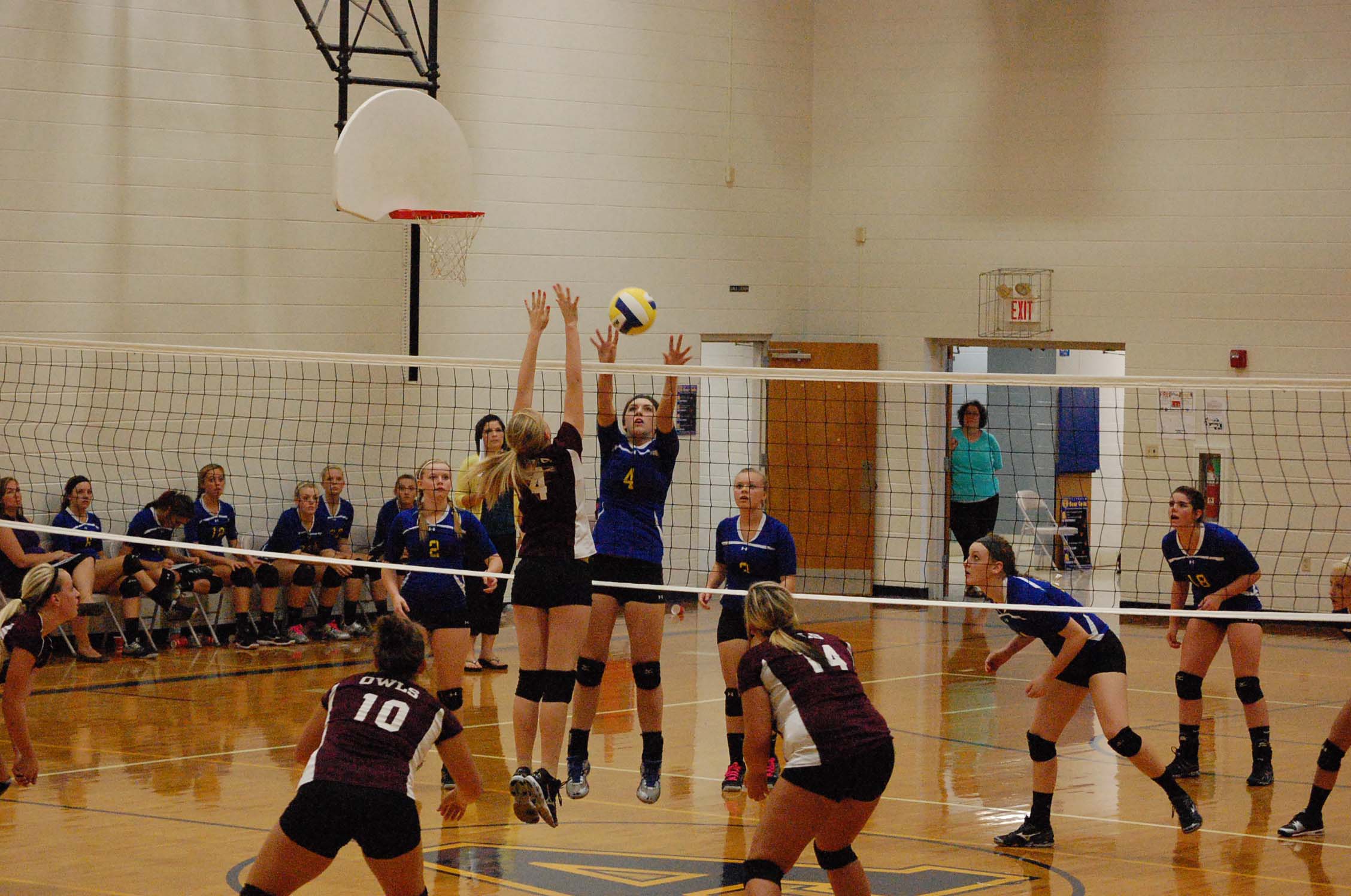 With the new bleachers installed, games were played in the high school gym.

Strong serving by the team led them to their third victory of the season.  Cera Longino and Shelby Bushong both had five aces apiece, Gidney added three, Shelton and Collett had two apiece.

The Lady Bears continued to strengthen their offense with Bushong adding five kills, Graham added two and Gidney had one.  Longino led the team in assists with six.

The varsity team pulled their weight to finish the night off with their first victory of the season beating the Fordland Lady Eagles 25-17 and 25-23.

The Lady Bears came out in the first set with a strong victory, but nearly gave Fordland the match in the second set but fought hard to pull out the win.

Caley Wallace led the team in aces with five, Darian Bushong had four, Alena Stokes had three, Courtney Mings and Destiny Sparnicht each added one.

The Lady Bears offense was alive and hitting hard with many of the team getting kills.  Mings, Bailey Loge and Erica Croney each had four kills, Stokes and Rachel Swofford added three kills apiece.  “It was a good win for us,” said Coach Roy. “We came out and played like a team. I was proud to see the girls recover and win the game after struggling for a couple of points in the second set.”

The Lady Bears take on Marshfield on Thursday here in Ava.