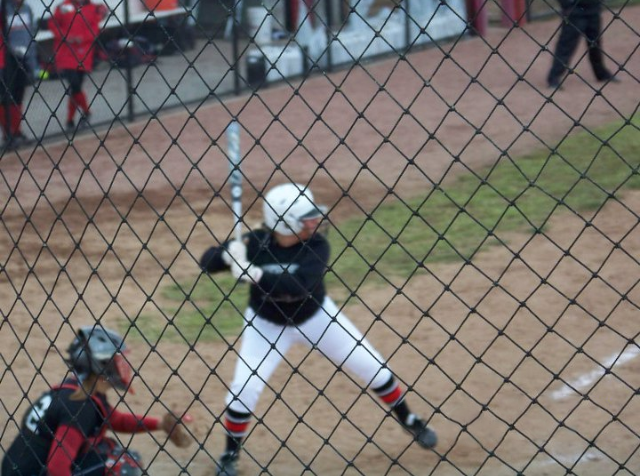 During college play, Sawyer is shown above, readying at the plate to hit the ball.

Growing up in a family involved in sports, Jessie Sawyer confesses life would not seem normal without athletics.  She admits that she has always been interested in sports –– she loves being involved, and loves playing.  And now, as elementary physical education teacher in Ava, she hopes to impart to students a genuine passion for athletics and sporting activities.

Jessie’s teaching philosophy embraces sports as an opportunity for youths to build character and to be better equipped for life.  In her classroom, workouts convey a positive approach to exercise, and provide a solid foundation for good sportsmanship attitudes and skills.

Regardless of a student’s talent or ability, Sawyer focuses on athletics as a mode for demonstrating good traits, such as setting and attaining goals, focusing, manners and how to work with others through play. She feels that sports is a discipline that provides students with guidelines on how to behave, interact and set boundaries. The age appropriate sports-related activities taught in her classroom are fun, and yet, they also provide healthy training for a youthful body and mind.

Jessie is excited about the physical education schedule this year, as students will attend two P.E. classes each week instead of one –– a welcomed change from previous once a week formats.

With an additional session, Jessie envisions innovative classes and fun-filled activities kids will look forward to each week.  She hopes the time will afford a broader scope of instruction, and more opportunity to work with students and ignite a passion for athletics and sporting activities.

During the year, Sawyer plans to introduce new games and music into the classroom format, with the hope it will entice students to embrace the fun side of sports.  Even though each grade level has different goals to attain, lessons will be challenging and enjoyable –– two dynamics instrumental to the art of education. And, it was those same dynamics that inspired Jessie to focus on teaching.

Reminiscing about school, Jessie mentions two Ava teachers who helped strengthen her desire to be an educator –– those instructors were Pat Henry and Brandy Harvill. As mentors, they made learning fun and that made a real difference.  She recalls classes with Henry her junior and senior years, and English and sports with Coach Harvill, and even though she cannot recall any special stories, both classroom experiences were positive and memorable.

Born and raised in Ava, Jessie attended Ava public schools and played sports throughout all four years in high school.  Softball was her main sport, on second base, and during off-season, she played guard on the basketball team.

During her junior and senior years of play in Ava, she was selected for first-team all district in softball.  Her senior year she also served as joint team captain with other members of the team.

After lettering all four years in high school, and demonstrating an outstanding talent, Sawyer received a softball scholarship to William Jewell College, in Liberty, Mo., near Kansas City, where she earned a Bachelor of Science in Recreation and Sport.

At William Jewell, Sawyer played softball all four years, and served as team captain for two years.  Her sophomore year, she received the Leadership Award from team peers, an honor termed  “wearing the hat”.

During her senior year, the college moved into the National Collegiate Athletic Assn. (NCAA), Division II, intermediate level of competition, and on that occasion, Sawyer was chosen to serve as president of the Student Athlete Advisory Committee for the NCAA.

After graduating from William Jewell in 2011, Sawyer entered Southwest Bible College and began working toward a Masters Degree in Education K-12. As a grad student, she also continued to pursue sports and took the opportunity to serve as assistant softball coach for one season.

At first, Jessie’s main objective was to teach high school, but after fulfilling student teaching at Strafford High School, and later enjoying the chance to work with elementary students, she felt more compelled to teach younger kids. She found that she had grown fond of their bright smiles and eagerness to learn –– their enthusiasm was inspiring.  Today, she enjoys the prospect of fashioning a fresh start in the minds of inexperienced sports enthusiasts.

As a youngster following dad’s career, Jessie watched and shared in each sporting season.  Athletics was the family lifestyle, and under that premise, it would seem that Jessie’s interests in sports was destined to happen. However, it wasn’t just fate.  Rex Sawyer, as father, coach and teacher, played a role in motivating his daughter to have a keen interest in sports, and a passion for the game of softball.

However, following the footsteps of a parent is not easy.

Today, Jessie has received many compliments from district personnel about her dad’s career and coaching accomplishments, and to her, those nice expressions are wonderful gifts.  Nonetheless, in high school, with dad as coach, she admits there were times the two of them did not see eye to eye, and sometimes it was hard because dad was the coach, and, the coach was always dad.  But now, with a different perspective on past years, Jessie admits she truly appreciates and better understands his mindset as a coach, and as a dad, and from those memories, she has learned so much.

With her dad as inspiration, Jessie continues to pursue his example and strive for those special successes.  And, for those of us cheering from the bleachers, it is apparent she’s off to a great start.

Jessie is the daughter of Sara and Rex Sawyer of Ava.