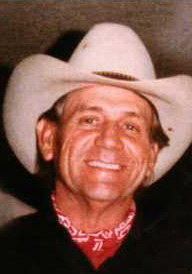 Herman Boyd (H.B.) Prock, beloved father, grandfather, and great-grandfather, departed this life Sept. 5, 2013.  On Aug. 24, 1935, Granville and Mabel Gardner Prock welcomed him into their Souder, Mo., home as their youngest son.
Herman graduated from Ava High School. He became a supervisor for the Peter Kiewit Construction Company, where his natural ability as a heavy equipment operator soon became very obvious. With his keen eye he was able to build many roads, lakes, ponds, and clear acres of land which can still be found in Douglas and Ozark counties.
He also was a partner with his brother, Rondo, in the Ava Sale Barn. Later, he did what he loved most, working as a professional trainer of cutting horses.  He was quoted in an article in the Springfield News and Leader as saying, “There are plenty of good horses out there, but only a few are athletes.  There are only a few that have that athletic ability.” As the years passed and it became difficult for him to train horses he turned to his other love, sitting around a card table.
Whether with family or friends, playing pitch or poker, he loved visiting and telling tales of his life and adventures, past and present.
He was preceded in death by his parents; two brothers, Rondo and Merl Prock; and three sisters, Wilma Lowe, Barbara Lauf, and Norma Harris.
He is survived by three sons, Mike (Vickie) Prock, Kenny Prock, and Chad Prock; five grandchildren Cody Joe (Rachel), Clinton (Sarah), Cody, Aaron, and Ezmea; as well as  five great-grandchildren, Emory and Delaney  Parham, Jaxton Prock, Caden and Connor Prock, all of Ava.  He is also survived by two sisters, Noreen (Merle) Nay, of Hutchinson, Kan., and Gratie (Carl) Shinpaugh, of Houston, Texas; and sisters-in-law, Virginia Prock and Irene Prock; and many nieces and nephews.
He will be deeply missed by a host of other relatives and friends.
Memorial services for Herman will be conducted at 6:30 p.m. Thursday, Sept. 12, 2013 at the Ava Family Funeral Home Chapel, Ava, Mo.
Cremation arrangements were under the care and direction of Ava Family Funeral Home.
To send online condolences go to www.Facebook.comAvaFamily FuneralHome.