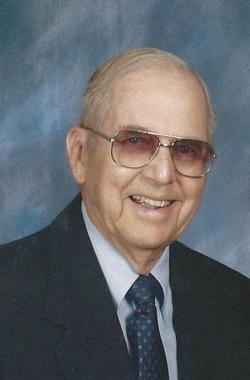 Rex L. Hobbs, born Jan. 3, 1921, devoted and loving husband, father and grandfather, passed from this life on Aug. 24, 2013, at his home in McKinney, Texas.
He is survived by his wife of 66 years, Lena Ledbetter-Hobbs and their children: daughter, Anita Hobbs-Horton and son, David Rex and his wife Robyn Nyles-Hobbs, and grandchildren, Sophia Claire Horton, Jackson Nyles Hobbs and Ava Devall Hobbs.
Rex was one of seven children of the Rev. Thomas B. Hobbs and Eliza Hampton Hobbs, all of whom are predeceased: brother, Ellis E. Hobbs, and sisters, Beulah Austin, infant Viva Hobbs, Faye Roberts, Maxine Blackwood and Helen Gardner.
Rex is survived by his brothers-in-law, Darrell Travis Ledbetter and wife Virginia Pinkley-Ledbetter, Stan Baber and wife Wanda Sue Ledbetter-Baber; and sisters-in-law, Joyce Ledbetter-Hampton and Earlene Holmes-Ledbetter and many friends and relatives.
Rex was proud to have served his country during World War II as a medic attached to a tank division. He was a retired pressman employee of Hallmark Cards, Inc., Kansas City, Mo., took early retirement and moved back to southern Missouri and was self employed as an Ozark School bus driver and cattle farmer.
Rex accepted Christ as his personal savior while being counseled by a childhood friend, Rev. Cecil Robertson, during a hospitalization following one of his heart surgeries. He was baptized in Little North Fork River in Theodosia, Mo., on Sept. 6. 1981.
Rex and Lena have been members of McKinney, Texas First Baptist Church since moving there in 1996 to live closer to their children. Rex has had many health issues during his life, but never complained, even during his extended illness as a result of memory disease. His one request was to spend the last days of this life in his own home.
A visitation will be held at 10:30 a.m. on Friday, Aug. 30, in Gorman-Scharpf Funeral Home, 1947 E. Seminole, Springfield, Mo, followed by a funeral service at 11 a.m., officiated by Rev. Doyle Turner. The interment will be at 1 p.m. at Missouri Veterans Cemetery, 5201 South Southwood, Springfield, Mo.